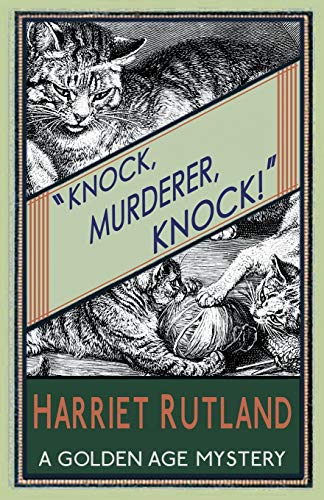 Harriet Rutland (real name: Olive Shimwell née Seers) is one of many Golden Age detective novelists benefiting from the recent wave of republications — her body of work, which, like that of Mavis Doriel Hay, consists of all of three novels, had fallen into near-complete oblivion by the time it was dug out of the pit and republished by Dean Street Press, with introductions by Curtis Evans (who blogs at The Passing Tramp and whose blog is incidentally, like those of Martin Edwards and fellow classic crime enthusiasts Paul Barge and Kate Jackson, very well worth following if you’re into Golden Age mysteries).

Knock, Murder, Knock! was Rutland’s first mystery and one of two books featuring an investigator named Mr. Winkley, associated with Scotland Yard but not part of the regular “force”.  It is set at a formerly highbrow, now a bit run-down spa in a fictional Devon location: Rutland was living in Ireland at the time of writing and based her description of “Presteignton Hydro” on just such an institution near her home; given the cast of characters making up her fictional hydro’s guests / patients and staff (as well as two of the investigating policemen), the change of location may have been a wise idea.  For the cast of characters are certainly one of this book’s greatest highlights; they’re eccentrics from first to last (well, OK, with the exception of the doctor in charge of the institution, his secretary, and the local inspector initially in charge of the investigation), and Rutland handles them with great assurance.  The murder method — death by knitting needle — is on the more unusual side as well (was Rutland punning Christie’s Miss Marple and Wentworth’s Miss Silver, one wonders?), and the novel had me feeling very well entertained until just after the first murder had happened, about 1/5 of the way in.

Alack and alas, Rutland almost lost me during the following 2/5s (the book is just under 250 pages long, so 1/5 approximately equates 50 pages or a little less); not merely because in those roughly 100 pages not a lot happens besides a police investigation that doesn’t greatly advance the plot, but also, as is expressly confirmed later, the local police (inexperienced in the handling of capital crimes) omit a number of fairly routine steps, and it is only due to these omissions that significant information remains undiscovered which, if the proper steps had been taken, would significantly have curtailed the whole affair.  Debut novel or not, I don’t much care for books whose plot has to rely substantially on professionals failing to comply even with the most basic requirements of their job in order for the book not to be over before it has really begun.

Fortunately things get lively again about 3/5 of the way in, and I read the final (ca.) 100 pages as quickly as the first (ca.) 50; even though there, too, I had my misgivings, this time in connection with Mr. Winkley’s approach to the investigation: This sort of thing may or may not have been legal at the time when the book was written (though I doubt Rutland even took the trouble to check) — and it’s of course not entirely fair to judge a book by standards other than those applicable at the time of writing — but there is little doubt that Mr. Winkley’s manner of proceeding would, in and of itself, cause the whole investigation to be thrown out today on a whole range of grounds; including at least two moments of downright foolhardy and unprofessional risk-taking, as well as issues of basic fairness that are profoundly enough ingrained in my thinking that I found it hard to simply set them aside on the grounds of “different times, different mores.”

Still, I’m going to take Rutland’s handling of the cast of characters, and a friend’s recent glowing review of another Rutland book (Blue Murder) as a positive sign and keep her on my TBR (it’s only two more books anyway).  I do, however, think I’ll save Blue Murder for last; it may well be the strongest of the lot, and if possible I’d like to end my run with her books on a high note.