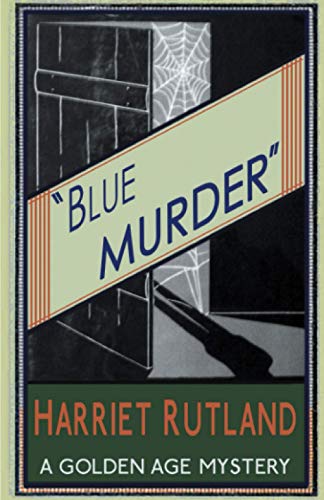 Harriet Rutland (real name: Olive Shimwell née Seers) only published three novels: I had (largely) enjoyed, even without being overly impressed with them, her first two ventures into detective fiction, Knock, Murderer, Knock and Bleeding Hooks, both of which feature a sort of “extracurricular” Scotland Yard detective named Winkley, but I had decided to leave her final novel (Blue Murder) for last, as based on the reviews of friends I had reason to expect it to be the best of the lot.  And wow, did that expectation ever pay off.

In Blue Murder, Rutland dispenses with any and all aspersions to the conventions of cozy Golden Age detective fiction.  Rather, this is a no-holds-barred social portrait of small-town England during WWII, and a behind-the-scenes look at the ugly daily realities of the life of one of the (fictional) portrayed small town’s supposedly leading families, pulling aside the frayed curtain of sham respectability to reveal a household characterized by bullying, spousal abuse, lechery, jealousy, xenophobia, manipulation, extortion — and ultimately murder, not surprisingly the end result of the lethal mix of personal traits and behavior patterns characterizing this particular household.  According to the book’s introduction by Curtis Evans (who blogs at The Passing Tramp), Blue Murder may in part have been inspired by events in Rutland’s personal life, which, in addition to the onset of WWII, might also explain the time lapse between its publication and that of Rutland’s two earlier novels: be that as it may, this book reads like it was the one book that Rutland was destined to write, and which in and of itself justifies that her novels should have been pulled from the claws of oblivion and been republished nearly a century after first having appeared in print.

Given its topic, obviously this is not a pleasant read: Rutland’s skill at characterization, which stands out even in her much lighter first two novels, is in evidence more than ever, and there is no such thing as a benign moment here — even incidents that may appear innocuous on the surface are laden with hidden significance.  Woe to the person, then, failing to recognize these moments’ and events’ deeper meaning; and one can’t fail to wonder about the wisdom of our POV character (and de-facto narrator, even though formally the book is written in the third person), a would-be writer from London, who has chosen this of all places to compose a mystery novel “away from the bustle and distractions of Town.”  Although Rutland plays merry havoc with the trope of a writer’s oeuvre reflecting the events actually happening all around him (or perhaps rather inspiring these very events?), the identity of the murderer is not all that hard to guess based on such things as character and opportunity, but even this does not take away from the novel’s impact — as mentioned above, there is nothing of the Golden Age “whodunnit” about Blue Murder, and suspecting the identity of the murderer only increases the reader’s anxiety as to the well-being of the other (remaining) characters.

Rutland’s first two books may be not much more than amuse-bouches, but if you read one book by her, make it Blue Murder: it may end up turning your stomach, but it should never have vanished from the reading public’s awareness of the body of crime fiction to begin with, and I hope it has now gained a more lasting readership once and for all.