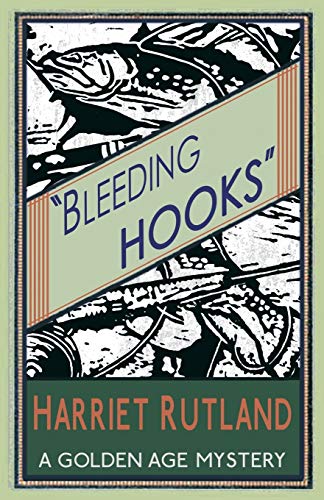 Harriet Rutland (real name: Olive Shimwell née Seers) fell out of favor with publishers and the reading public even more than Joanna Cannan in the decades after WWII (or at least after her 1962 death); it would take over half a century for the three books that constitute her entire literary output to be republished, as part of the recent couple of years’ general wave of reemergence of Golden Age crime fiction.  I read her first Mr. Winkley book, Knock, Murder, Knock! last month; Bleeding Hooks is the sequel, which takes the Scotland Yard “random brainwave” expert to Wales for a spot of fishing.

This being a mystery, obviously Mr. Winkley doesn’t manage to leave crime behind after all; and like in the first book Rutland outdoes herself in the selection of the dastardly deed’s instrument: it’s murder by knitting needle there, and murder by salmon fly here.  Just how the death has occurred is a bit of a puzzler: heart attack as a result of shock (and if so, accidentally or deliberately induced)?  Or was the fly poisoned (and if so, how, since the most proximate agent would seem to be too volatile)?  Questions — so many questions.  However, they only occur to Mr. Winkley and a young couple rather unfortunately nicknamed Pussy and Piggy who are staying at the same hotel as Mr. Winkley, the victim, and the rest of the motley crew of their fellow anglers and vacationers; everybody else seems more than happy to call the whole thing an accidental death and be done with it.

As in the first book, what most stands out here — in addition to the murder method — is the setting and the cast of characters; as well as Rutland’s manner in setting the scene for the (not-so) tragic interruption of (almost) everybody’s favorite sport.  (Favorite sport in the book, that is; personally I abhor any sports that involve the killing of living creatures — besides which, I wouldn’t have the patience for fishing to begin with, and I don’t much care for fish as food anyway, either.  And no, this is manifestly not a matter of the proverbial sour grapes, either.  But I digress.)  The first 50 or so pages of this book are, like those of Rutland’s first Mr. Winkley novel, a joy to read; she really had a knack for bringing characters to scintillating life with a few well-placed strokes of her writerly pen.  Also, one of the features that really stood out favorably to me here was the portrayal of a father raising his son as a single parent; not a thing you’d expect to show up in a 1930s novel at all, particularly not in a mystery.  Unfortunately, and again as in the first book, the novel more or less fell apart for me the moment the dead body made its appearance — not quite as drastically as between (roughly) pages 50 and 150 of book 1; but by the same token, there was no drastic recovery, either.

For one thing, the actual reasons for the victim’s untimely demise are built intrinsically into the solution; as a result of which, until her death, we mere experience her as a nuisance, and although Rutland does let on that there could be more to her story than meets the eye, apart from a fairly obvious red herring (and don’t you just love it when a mystery-related metaphor fits a book as obviously as this one?), few persons seem to have profound enough reasons to fear or hate her to make murder seem an obvious solution.  Now, that’s of course not a mandatory feature, and there are quite a few excellent mysteries out there where it is precisely the seemingly random nature of the killing that produces the first questions that need to be answered.  But in this instance, the victim actually is set up as the kind of genuinely awful person who in a mystery is just asking to be killed, and in that regard she falls (or at least, initially seems to fall) decidedly short of her (in)famous peers from the pens of Agatha Christie and Georgette Heyer (think  Mrs. Boynton, Simeon Lee, or old Adam Penhallow) — and that is true even more for the fact that part of her would-be unlikeability is based on a juicy bit of fat-shaming on part of the author, which ultimately reflects back on Rutland herself much more than it does on her book’s character.

Worse, though (and ultimately fatal to my enjoyment) was the fact that I just couldn’t take Pussy and Piggy serious as amateur investigators.  They’re supposed to be in their 20s — “Piggy” is a university student — and engaged (i.e., on the point of forming a family), to boot; yet, they have the mental maturity (or lack thereof) of teenagers and, when they don’t happen to be sitting down for some five minutes’ worth of serious thinking, they display all the annoying behavior patterns to match.  In fact, all told they are considerably less mature than the single father’s eighteen year old son, for all of that particular young man’s insecurities; which are, moreover, eventually explained, whereas we’re apparently supposed to take Pussy and Piggy’s antics as the natural byproduct of young love.  Well, I just don’t. — Lastly, in the final pages of the book Rutland throws a spanner into the works of the solution to which she has built up until then: in fairness, it’s not a deus ex machina thing, but at this point it does come very much from left field, and in sum, that just was the proverbial last straw tipping my exasperation over the edge once and for all.

I have only one novel by Rutland left to read, and by all accounts it’s her best one (Blue Murder, a standalone book) — I am glad that I decided to leave best for last, though; otherwise I’d probably be calling it quits at this point … or at the very least thinking about it (and continuing, if at all, strictly for completion’s sake). 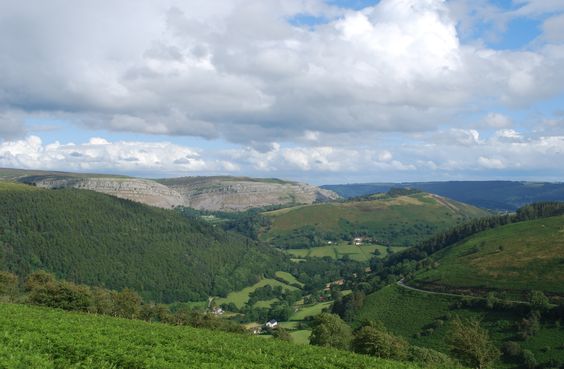 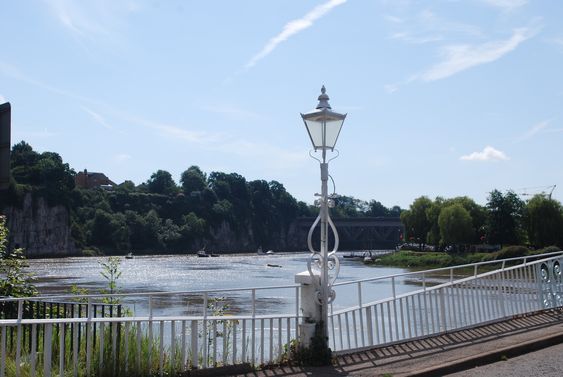 Wales:  view from Horseshoe Pass (north of Llangollen and Valle Crucis Abey) and the River Wye at Chepstow (photos mine)