Hans Silvester: Asleep in the Sun 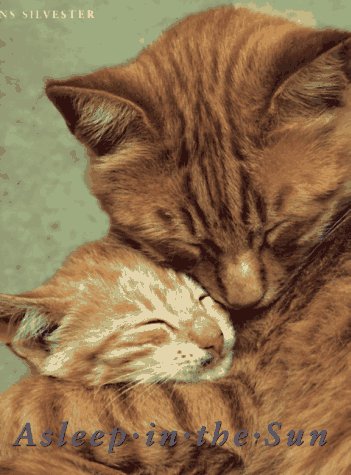 “For those who would learn to siesta well, I advise taking a cat as a teacher,” German photographer Hans W. Silvester writes in this book’s preface. And anybody who has ever owned a cat knows that he has a point: Cats sleep up to 17 hours a day, preserving their energy for the moments when it is really needed – even if they live in an environment where they never need to hunt (there’s still that all-important playing, after all!); and even if a cat’s sleep is never so deep that it can’t be stirred at a moment’s notice (hence the term “cat nap”). While cats may change their sleeping places several times a day, they will always choose a spot that affords them equal measures of comfort and protection: warmth and soft ground or soft bedding, but also shelter from the wind and from unwanted intruders.

Silvester is a well-known photo journalist with an established track record for environmentally sensitive reporting (including, inter alia, a widely publicized report on the destruction of the Amazonian jungle). Cats have been a part of his life for well over 40 years; and his love and intimate knowledge of his subject is quite obvious from the photos in this magnificent coffee table book, originally published in France under the title “Sieste et Tendresse” (“Siesta and Tenderness”). Although based in the Provence, for this project he traveled to the Greek Cyclades Islands, where cats are virtually omnipresent: unlike their domesticated brothers and sisters elsewhere, carefree outdoor dwellers who may or may not be attached to a human family; nor, however, exclusively scrawny back-alley bags of bones. The presence of cats is an everyday fact of life in Greece; humans and felines coexist without (for the most part) human attempts to over-domesticate their feline neighbors. Cats are appreciated for their help in keeping rats and mice in check, and while the local approach to animal control can occasionally be drastic as well, overall feline life in Southern Europe (and particularly in Greece) is probably much closer to their natural existence than in many other Western societies, where they are all too often either pampered and overfed indoor dwellers or abandoned, raggedy, disease-ridden skeletons who have learned to expect nothing but evil from humans. The photos in this book depict outdoor cats in unposed, natural circumstances; and yet in positions and situations every cat lover will instantly recognize.

On almost 130 pages, Silvester thus chronicles cats of all colors and sizes curled up with complete abandon on rooftops, windowsills, concrete and wooden stairs, balconies, flower pots, cafe chairs, benches, sofas, a fruit vendor’s empty cardboard boxes, wooden boxes, trailers, fishermen’s boats, the hood of a car, high grass and next to a chapel bell, stretched out in the middle of a street, next to a wooden fence, on a balustrade, a quai or a wall, squeezed into the branches of a tree or beside a building’s wooden beams, perched into a corner, a group of large rocks, a spot of soft earth in the middle of a meadow, a cast-iron balcony roof grid, an abandoned tire or the wheel of a concrete mixer, piled up on top of each other, yawning, playing and exchanging little tendernesses, and even a few pictures of kittens happily feeding from their somnolent mothers. While the photographer’s focus is clearly on his feline subjects, many of his pictures also show the unique flavor of the Greek islands where they were taken; the Cyclades’ sun-drenched landscape, the deep blue of the Mediterranean, the white of walls and houses, and the peeling blue, green and red paint of wooden fishing boats, doors and window frames. This is a book to contemplate, smile and, occasionally, laugh out loud – a marvelous gift for cat lovers young and old.