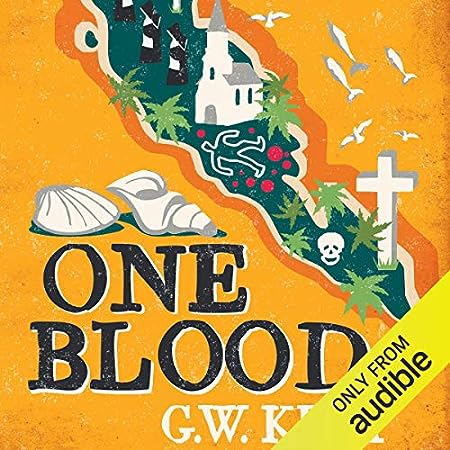 My experience with book 1 of the Ben Kella and Sister Conchita series was encouraging enough to move on straight away to the second book, which started vigorously enough with the death (murder?) of an American tourist — or was he? — in the tiny church of the Gizo Island mission where Sister Conchita has been sent by her order as a “placeholder” administrator until the arrival of the mission’s new priest; as well as Kella’s new mission to clear up some trouble experienced by a powerful logging company in the Roviana Lagoon (like Gizo, in the so-called “Western District” of the Solomons) … after having deflected a minor religious upset on his home island of Malaita, that is.  And again I can’t fault Kent for not having done his homework: Both in terms of setting and native culture, as well as the story’s historical background, this is very obviously on solid ground; and since we’re talking about a series set in an erstwhile British colony on the point of becoming independent, one of the aspects I enjoyed here was seeing how those hoping to hold political office post-independence went about positioning themselves with their electorate.  Last but not least, even though this is a book published in 2011 and I’m not sure to what extent logging would genuinely have been an environmental and cultural concern in 1960 (when the book is set), I rather liked the fact that Kent uses this outlet to voice his concerns with regard to these issues.

The main gripe I have with this novel though, is that here we’re no longer dealing with a book written with the idea of conveying information about the Solomon Islands just-pre-independence while also telling an interesting story.  Other things intrude, and by and large that is not a good thing.  Most noticeably, I don’t know whether it was Kent’s own idea or that of his publishers — somebody, in any event, thought it would be a great idea to bring in the 1960 U.S. Presidential election, where the Democratic candidate was one John F. Kennedy, who had served as a naval officer in just this part of the Solomon Islands in the 1940s, where he was shipwrecked, and disappeared with his crew for almost two weeks, after an encounter with a Japanese destroyer in 1943.  And in the hands of an experienced author this sort of thing may well pay off; in fact, I read a book based on a similar premise — though an entirely different location and time period — just last month (Michael Jecks’s The Chapel of Bones).  However, in that other book the ploy works because the author can forge a natural link between his main characters and the location of the historic event he is using, and all of his book’s other characters are locals; so there is nothing contrived about the whole thing — whereas Kent, here, not only has to rely on coincidence to simultaneously bring both of his main characters into the vicinity of the place of Kennedy’s disappearance to begin with; he also has to resort to coincidence and conjecture aplenty in crafting his plot and introducing his cast of other characters, almost all of whom are as much outsiders in this part of the Solomons as are Ben Kella and Sister Conchita — arguably, in fact, other than a minority of native characters from this part of the Western District islands (only a few of whom even rise to the level of notable supporting characters), the closest thing to “locals” that the book serves up are the nuns of Sister Conchita’s tiny mission, all of whom are Europeans by origin, though they have been living in the mission for decades, since before WWII.  And not enough with this, both Sister Conchita and Ben Kella also develop Mary Sue / Gary Stu tendencies that are impossible to overlook and seriously jarring: As I mentioned, there’s a bit of this in book 1 of the series, too, but while I was able to brush it away there, here it becomes central to both the plot and the resolution; and the resulting eyeroll-factor is, while not quite as bad as that associated with the American professor’s subplot in book 1, a serious annoyance.

There are only three books to the Ben Kella / Sister Conchita series; I have no idea whether the reason is that Kent’s publishers ultimately concluded that, after all, he only did have the one story inside him that he told in book 1, Devil-Devil (and thus the publishers chose not to extend his contract beyond the standard first three books), or whether it’s tied to Kent’s age and possibly frail state of health — for all I could see online, he seems to have been born in the 1930s, so writing these books was obviously a post-retirement occupation, which he may not have been able to continue beyond book 3 (entitled Killman).  Either way, I may find out when I get around to the third book — which I’m still planning to read, if only for completion’s sake, although it may take me a while to get there, as my enthusiasm isn’t anywhere near on the same level anymore as it had been initially, and as it still was after book 1.