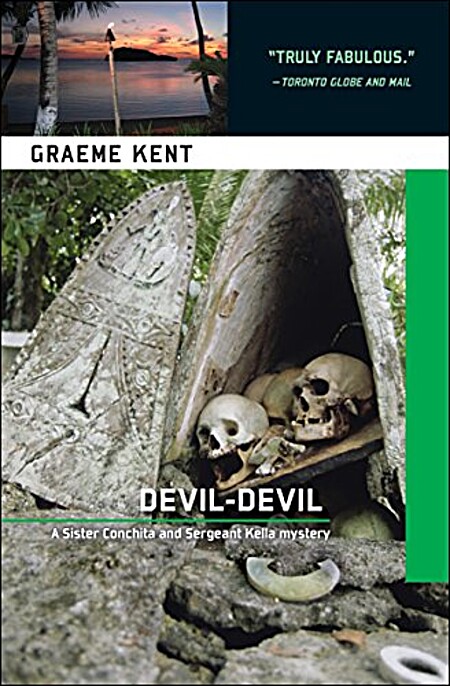 This book (and series) had been on my radar ever since I first started to put together reading lists for my Around the World project.  A mystery set in the Solomon Islands, with a Lau policeman as one of the major characters — and set in the time period immediately prior to the end of British colonial rule?  Too tempting for words.  So don’t even ask why I only got around to it in the third year of the project’s existence …

Anyway.  Welcome to the world of Ben Kella, who, like so many of his fellow islanders, must somehow find a way to reconcile his Western education with his native island traditions; more specifically in his case, the fact that from childhood on he’s been groomed to be his people’s aofia, which roughly translates as “peacemaker”, but in fact is a position of great authority, combining the roles of a judge, an investigator, a guardian of the weak and unprotected, and — to some extent — a priest (or at least, a mediator interceding on behalf of his fellow humans with their deities and spirits).  Becoming a policeman in the British colonial service is only a solution on a very superficial level, as it tends to bring him into conflict with both of his worlds even more whenever those clash; on a spiritual level as much as in terms of daily coexistence (and authority).  Which is of course precisely what happens when a seemingly random elderly villager on Kella’s native island of Malaita is killed, when after the subsequent ghost caller ceremony the local chieftain refuses to pay the ghost caller and hostilities ensue as a result, when Ben moreover discovers a death curse near the killed man’s home, and when the man’s grandson takes off in a panic as a result — all the while Kella’s British superiors are anything but happy (in fact, spitting with rage) that he’s bent on getting involved in the matter, instead of focusing on the one and only task for which they’ve sent him back to Malaita to begin with; namely, to find an American scholar who seems to have gone missing in the wilds of the island’s mountains.  Because Kella is, from the point of view of his British bosses, on probation, after there had been some unforeseen unpleasantness (read: deaths) after he had gone off on private (read: aofia) business six moths before, too, and he’s been languishing at a desk in the Solomons’ capital of Honiara, on the main island of Guadalcanal, ever since.

During his investigation, Kella crosses paths repeatedly with a headstrong, unconventional young American nun named Sister Conchita, who picked a Spanish name after her ordination thinking she’d be sent to South America instead of the South Pacific.  There’s a bit of the standard mystery “crossing swords but grudgingly coming to respect each other and work together” trope in the establishment of the two investigators’ relationship, and given their disparate backgrounds it even (mostly) makes sense, though I was glad to see that Kent wasn’t set on overdoing this aspect; even it does take until the final part of the book for them to get themselves sorted out.  But there are plenty of other events to keep the reader engaged, and the action jogs on at a nicely-paced speed all along.  I could seriously have done without Sister Conchita’s one major Mary Sue moment towards the end of the book, though — it’s obvious why Kent sent her down, or rather up this particular path, and I approve of the author’s reasoning in principle, but its execution calls for a physical feat which I found palpably incredible, and it’s not necessarily helped by the fact that here, too, the book’s solution involves a supernatural element that I personally found as inaccessible as it was unnecessary from a plot point of view.

Obviously books involving one particular culture written by an author from a different culture usually have to be taken with a grain of salt of some size or other; but based on the book as a whole, it seems to me that we really are looking at a grain of salt at best, not a boulder-sized rock.  Graeme Kent, this book’s author, was (according to the book’s back cover and what I’ve been able to find out online) head of BBC Schools Broadcasting in the Solomon Islands for eight years and subsequently served as Educational Broadcasting Consultant for the South Pacific Commission; and there’s not a scrap of doubt that he knows the islands about as well as anybody not actually born there can know them.  Also, as this book and its sequels were written in the 2010s, not during the period when they are actually set (the 1960s), there is no colonial bias in the writerly tone; very much to the contrary in fact, British colonial society is unflinchingly portrayed as a decaying beast aware that it’s long outstayed its welcome, and whose representatives couldn’t care less about the daily grind of the jobs still keeping them in Honiara, while they are already looking forward to either retirement At Home or a new but equally plush and pointless appointment in another part of the British Commonwealth … as long as Britain still has any colonies at all, that is.  Kella and his fellow islanders, on the other hand, can’t wait for the Brits to be gone, even though they know that will only solve part of their problems and nobody has a very precise idea what post-colonial Solomon Islands society is going to look like. — Kent also seems to have researched Lau and other Solomon Islands religions and belief systems in quite some depth: Making allowance for the above-mentioned grain of salt (the taste of which seems to be a bit more pronounced in the ghost caller ritual described early on in the book than in other scenes, as well as Kella’s thought processes, later on), and given that I knew next to nothing about the Lau and other Solomon Islands cultures going in, Kent conveys both the underlying philosophy and certain cultural elements that are central to the plot with what at least sounds like a fair amount of genuine insight — and respect: no talking down to “the savages” here; in fact, it’s the islanders who make fun of the obviously ignorant and racist way in which they are portrayed in classic 20th century Western literature, as “terrified extras” (in Norman Mailer’s The Naked and the Dead) and “savage headhunters” (in Jack London’s The Cruise of the Snark; both works are expressly name-checked).  As for the attitude of the more enlightened Europeans, one of the book’s most interesting white characters — Father Pierre, Ben Kella’s erstwhile mission school teacher and now mentor to Sister Conchita — explains to the young nun that she will ultimately have to make up her mind whether she wants to “go by the book” and continue following Catholic doctrine no matter what she sees in the world around her, or “do what a number of priests and nuns who have spent much of their time in the bush do, and appreciate that there are two worlds of the spirit in the Solomons, and that sometimes they intermingle.”

As indicated above, the mystery’s solution is triggered by an unnecessary and overdone Mary Sue feat on the part of Sister Conchita; also, the resolution of Kella’s official mission back to Malaita (the search for the vanished American scholar) is so cliché-ridden and ridiculous that it had me shaking my head in incredulity and my eyes went into 360-degrees-loop-and-spin-around-yourself rollercoaster mode.  But there is a good, solid solution to the main mystery (the one involving the deaths whose investigation by Kella so infuriates his superiors) as well, and it doesn’t rely on deus ex machina revelations — every part of the solution is based on an element or a clue presented over the course of the novel; yet the solution still manages to contain an element of surprise.  So, ultimately four stars is the maximum I’m willing to give this book, but those four stars it gets, because it was for the setting and the culture I chiefly picked this book, and on those counts it delivered in spades; and despite some unnecessary and, in part, exasperating decoration along the way, the mystery as such is solidly enough crafted.