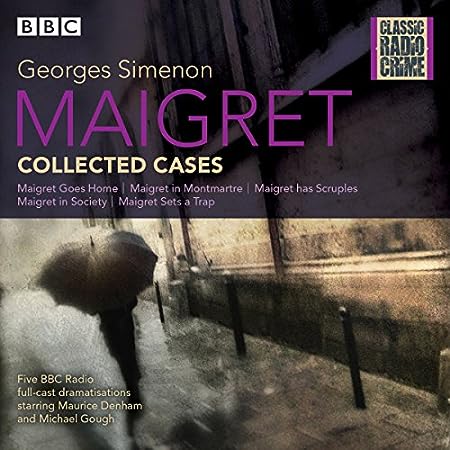 Radio dramatizations of five novels from various periods of the Maigret canon, originally published (in the order in which they appear in this collection) as

By and large this is chiefly a star vehicle for Maurice Denham (Maigret) and Michael Gough (Georges Simenon), who revisit these five cases of Maigret’s by chatting about them over a pipe or three. Still, the presentation switches back and forth between the two men’s conversation and an “actual” dramatization, so it’s not all just narrative dressed up as dialogue; there is some real sense of action, too, courtesy of a full cast of characters and actors in each episode. However, what is most lacking here is the distinctive atmosphere of Simenon’s original novels: heavy on the sordidness on everyday life (whether in Paris or in the provinces), the fallibility of mankind, the corruption of the rich and powerful, and the basic decency of almost everybody else. Apparently this loss of genuine atmosphere can’t really be helped, as I’ve noticed much the same thing in a series of German radio dramatizations of individual Maigret episodes, too (though the same German production team did much better with the atmosphere of the few non-Maigret novels also included in that particular series). — Anyway, for an afternoon’s worth of a quick refresher on the novels adapted for radio here this is nice enough … it just isn’t any patch on the actual novels.