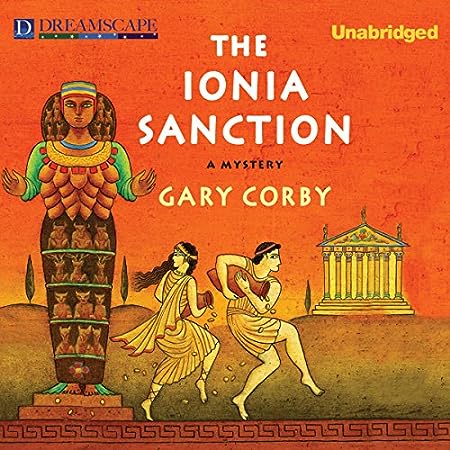 The Ionia Sanction is the second book in Gary Corby’s mystery series set in the Athenian Republic of Pericles and the great philosophers, and I picked it as an introduction to the “actual” book I’d been planning to include in my Summer Games reading project — the series’s third book, which is set during the Olympic Games (Sacred Games).  Having also read that book in the interim, I think I just may have chosen a bad book to start with, but I confess that after having finished this particular installment, I was in grave doubts whether to even read a single other book from the series at all.

The Athenian Mysteries’ protagonist is a sculptor’s son named Nicolaos, who in book 1 (The Pericles Commission) had — or so we learn at the beginning of book 2 — been appointed investigator by Pericles himself, who again calls on him when the proxenos (trade representative / ambassador / honorary consul) of Ephesus is found murdered in his Athens home.  Now, I might have forgiven the spelling of “Nico”‘s first name (correctly, it would have to have been Nikolaos (Νικόλαος) — the Greeks invariably used the letter “k” where the Romans used a “c”; in fact, they still do), even though this sort of inattention to detail usually doesn’t bode well, but arguably it makes sense to adjust the spelling to the Latin-Anglicized spelling of names such as Pericles (Περικλῆς, i.e. Perikles in Attic Greek); and I’ll concede to Corby that generally his books are well-researched.

But the first time I did a real double take was when I learned that not only does our Nico know Pericles, he also has a younger brother named Socrates … and yes, we really are talking about “that” Socrates, the king-of-philosophers-to-be, as Nico’s father is one Sophroniscus, of the deme (Athens subdivision) Alopece, and guess who the real Socrates’s father was — and to rub it in even more, we learn about young Socrates’s incorrigible penchant to hang around with the philosophers of the day at every conceivable opportunity.  And it turns out that Nico himself doesn’t only hobnob with Athens’s leading politician and (with all the grudging affection of an elder brother routinely outsmarted by his younger kin) with the boy who will become one of the greatest of all philosophers, from Ancient Greece to the present day, either … he also gets to meet famed general Themistocles, hero of the battles of Marathon, Artemisium and Salamis, who by this time has been banned from Athens for alleged treason, and has become the governor of the Persian province of Magnesia, after having been granted shelter by Persian King Artaxerxes I (the very ruler whose armies and navy the Athenians, under Themistocles’s command, had roundly defeated in the above-mentioned battles).  And not even enough with all that: after Nico’s investigation has taken him first to Ephesus and then (you guessed it) to Magnesia on the Maeander, he gets to spend time at Themistocles’s court, is taken into confidence by Themistocles’s devil’s brood of an offspring … and eventually plays a crucial role in bringing about Themistocles’s end, which according to some (albeit contested) reports was due to poison.  Now, I could live with virtually all of the above if Corby had picked as his protagonist a member of the Athenian upper class (regardless whether real or fictional), i.e., somebody who had at least a minimum expectation to meet some or maybe even all of these personnages of note, and to be involved in at least some of these events.  And, by the same token, I respect Corby’s use of fiction to bring these events (back) to the modern reader.  But come on — a humble artisan’s son?  The son of a man who repeatedly has to struggle to keep his business afloat, and is therefore counting on his eldest son to make a good marriage (i.e., marry a rich Athenian citizen’s daughter with a dowry and family connections to match)?  Even Nico’s close connection with Pericles stretches believability; even more so does all the rest.  By the time we got to Magnesia, my eyes were rolling so fast it was making me dizzy; and their constant twirling picked up even more speed from that point on.

As for Nico himself, he is an odd and hard-to-believe combination of utterly TSTL on the one hand (it’s a wonder he even makes it out of Ephesus alive, instead of getting himself killed due to a mixture of bumbling, ignorant, credulous tourist behavior and an inexplicable lack of circumspection in light of the fact that he knows he is pursuing an extremely crafty killer and his own life is in danger for a multitude of reasons) and an equally incredible amount of political and strategic savvy on the other hand.  His character is a bit more balanced in the subsequent book, so I am willing to put this obvious imbalance down to the fact that this is the series’s sophomore entry and may, therefore, be considered part of Corby’s apprentice phase as a fiction writer.  But in addition to everything else that I found exasperating in this book, it was just one more jarring element.  Virtually the book’s only saving grace, in addition to the colorful historical setting as such, was Nico’s lady love Diotima, conveniently having become a priestess at Ephesus’s famous temple of Artemis after the events in book 1; a lady inferior to Nico in social rank (and thus, according to his father — who would need to consent to the match — manifestly inappropriate marriage material), but infinitely his superior in brain power. — The fact that Nico is (apparently) intended to function as a sort of Watson to Diotima’s Sherlock(ia) Holmes goes some way towards explaining his lapses of judgment and intelligence; and, as I said, his character is more balanced towards an average level of brains in book 3, but I was still glad I at least had Diotima to cheer for in The Ionia Sanction.

So, not the most auspicious of beginnings (and I doubt I’ll ever go back to book 1; or if I do, it won’t be anytime soon).  Nevertheless, it was probably a good idea to start the series with at least one book prior to the one I had picked for my Summer Games project, as the series features a continuous story arc as far as Nico’s and Diotima’s back story and personal lives are concerned, and even by the end of book 2 they have already accumulated such an amount of joint experience and adventures that it would be impossible for any author to adequately summarize all of these events by way of background to the subsequent book’s developments — and the brief summary to which Corby is necessarily compelled to limit himself in book 3 can’t possibly even begin to convey the weight of the load they must both be carrying at this point. 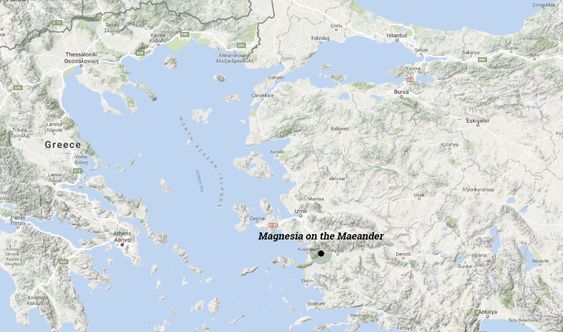 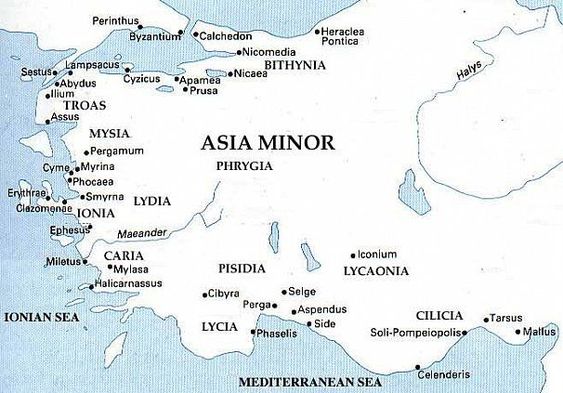 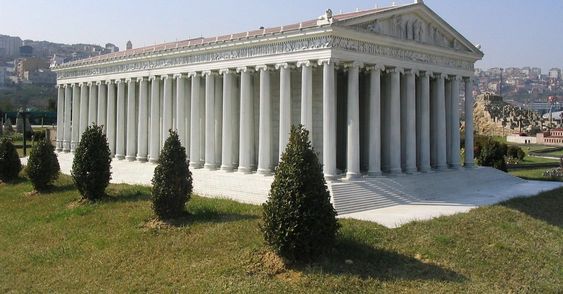 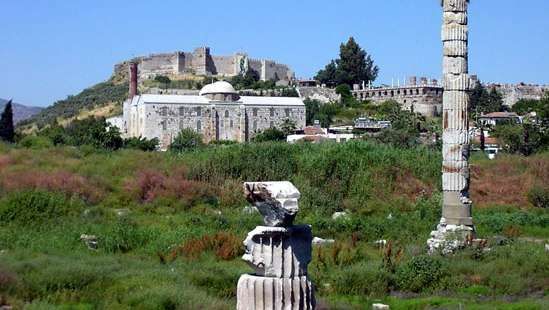 Ephesus: model and remains of the temple of Artemis
(Image sources here and here) 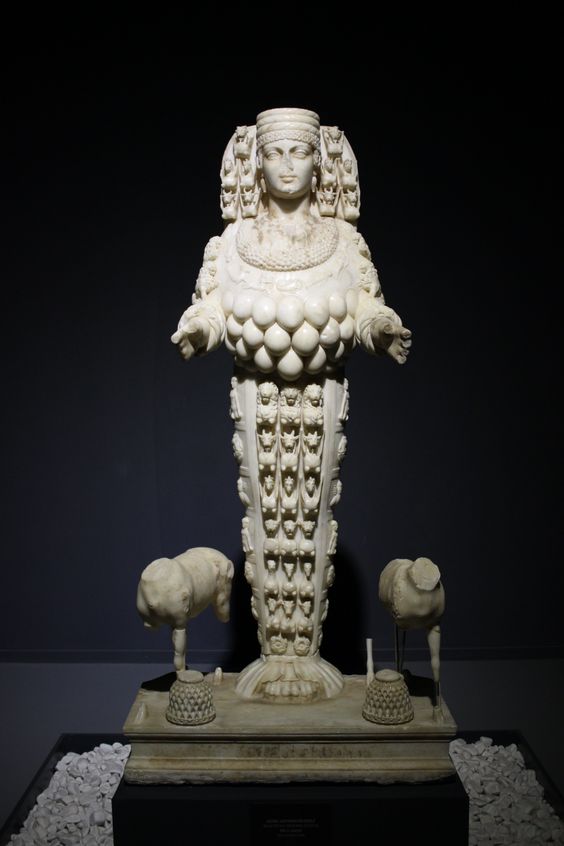 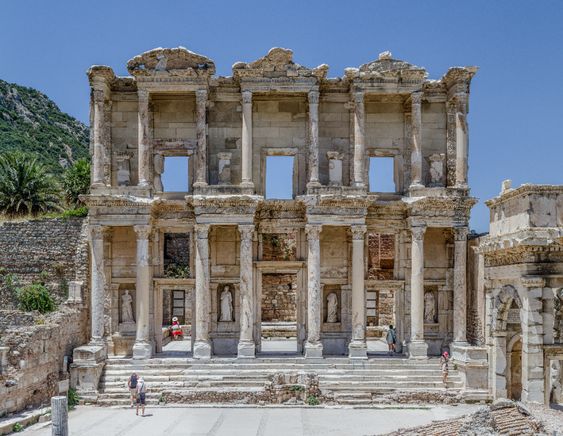 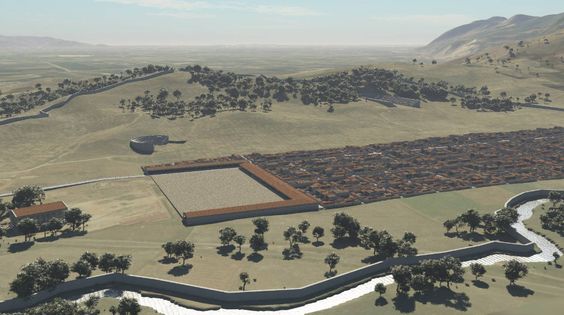 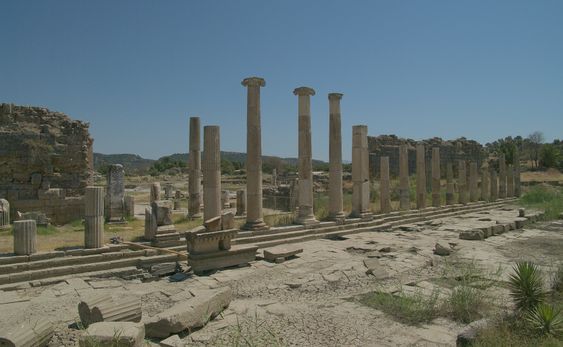 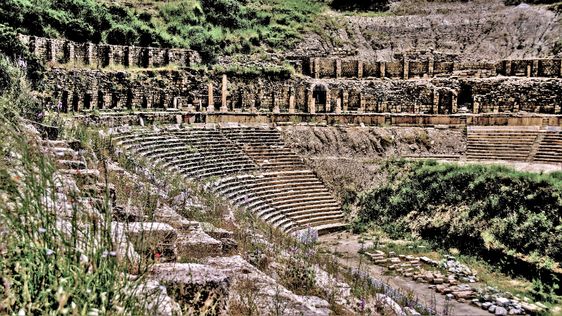