Flannery O’Connor: A Good Man Is Hard to Find and Other Stories 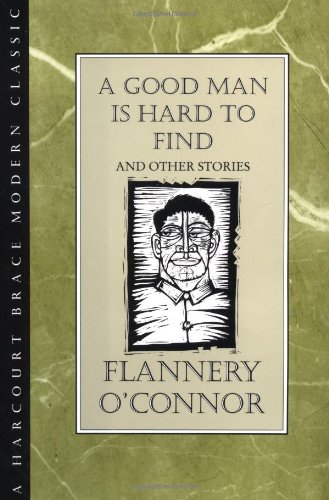 Oddball prophets caught in a web they wove themselves.

They are misfits, wanderers, and souls searching for faith and absolution. Many of them are, to one extent or another, hypocrites; others are almost unbelievably naïve. All of them are Southerners – and yet, even the most outlandish among Flannery O’Connor’s protagonists come across as entirely believable, complex characters whom, regardless of location, you might expect to come across in your own travels, too; and there is no telling how such an encounter would turn out.

Of course, you would hope it does not prove quite as disastrous as the title story’s chance meeting of a family taking a wrong turn (on the road as much as figuratively) and the self-proclaimed Misfit haunting that particular area of Georgia; which culminates in a bizarre conversation, the failure of communication underneath which only adds to the reader’s growing feeling of helplessness in view of impending doom. And such a sense of irreversible destiny pervades many a story in this collection; yet, while as in O’Connor’s writing in general, her and her protagonists’ Catholic faith plays a dominant role in the course of the events, that course is not so much brought about by the hand of God as by the characters’ own acts, decisions, judgments and prejudices.

Freakish as they are, O’Connor’s (anti-)heroes are meant to be prophets, messengers of a long forgotten responsibility, as she explained in her 1963 essay “The Catholic Novelist in the Protestant South:” their prophecy is “a matter of seeing near things with their extensions of meaning and thus of seeing far things close up.” Often, she uses names, titles and items of every day life and imbues them with a new meaning in the context of her stories; this collection’s title story, for example, is named for a blues song popularized by Bessie Smith in the late 1920s, and a cautionary road sign commonly seen in the 1950s (“The Life You Save May Be Your Own”) becomes the title and motto of a story about a wanderer’s encounter with a mother and her handicapped daughter who take him in, only to use that purported charity to their own advantage – at the end of which, predictably, nobody is the better off. Indeed, the endings of O’Connor’s stories are as far from your standard happy ending as you can imagine; and while you cannot help but develop, early on, a premonition of doom, most of the time the precise nature of that doom is anything but predictable.

“A Good Man is Hard to Find and Other Stories” was Flannery O’Connor’s first published collection of short stories; yet, by the time these stories appeared (nine of the ten were published in various magazines between 1953 and 1955 before their inclusion in this 1955 collection) she was already an accomplished writer, with not only a novel under her belt (“Wise Blood,” 1952) but also, and significantly, a master’s thesis likewise consisting of a collection of short stories, entitled “The Geranium and Other Stories” (1947; first published as a collection in 1971’s National Book Award winning “The Complete Stories of Flannery O’Connor,” although several of those stories had likewise been published individually before). Two of the stories included in “A Good Man Is Hard to Find” count among O’Connor’s six winners of the O’Henry Award for Short Fiction (“The Life You Save May Be Your Own” and “The Circle in the Fire,” again an exploration of insincerity, half-hearted charity and its exploitation); and the collection as a whole, even more than her first novel, quickly established her as a masterful storyteller, endowed with vision, an unfailing sense for language and a supreme feeling for the use of irony; all of which have long since placed her firmly in the first tier of 20th century American authors.

Flannery O’Connor died, at the age of 39, of lupus, an inflammatory disease which in less severe forms may not be more than an (albeit substantial) nuisance, but which proved fatal in her case as well as that of her father before her. Her literary career, almost the sole focus of her life from the moment that she was diagnosed onwards, was thus cut short way before her time. Yet, to this day her writing holds a unique position in contemporary literature; and “A Good Man Is Hard to Find” is an excellent place to start exploring her work.