Task 1: If you could go anywhere in the world, name your top 3 locales, and tell us why if there’s a reason beyond just wanting to go.

I suppose if I’m to nail it down to three, it would be (in no particular order)

In other words, the one major pre-Columbian site that I haven’t seen yet, and which has everything from history and archeology to nature and a breathtaking location (and which also happens to be terminally threatened by overtourism); the natural environment of some of my favorite animals; and the place that combines all of the world’s major natural features into two (judging by images and narrations) breathtakingly beautiful, long and narrow islands, has a rich and fascinating indigenous culture, and still manages to be home to more sheep than people. Oh, and to Hobbiton, Rivendell and Rohan, of course.

Task 2: For those that identify with a faith, just about everyone has a pilgrimage that many of their most devout followers attempt to make at least once in their lifetime. If you had the means and the motive, where would you make a pilgrimage to? It need not be a religious pilgrimage; perhaps your Mecca, Jerusalem or Vatican is a bookstore, or a theme park, or some far flung destination that holds significance for you, personally.

I’ve been lucky enough to have lived, or at least spent extended periods of time in, all of the places that I can say I have the most deeply-rooted emotional connection with (for one reason or another), so at this point I don’t think I still have a place I’d want to make a pilgrimage to. In fact, some of these places I’m not even sure I’d want to revisit as a tourist — I prefer to remember them the way they were when I used to live there.

Task 4: (Cheeky) Pick a person – real or fictional – to send to a place of your choice – again, real or fictional – and tell us where, why and what sort of accommodations they can expect to enjoy while they are there. This can be a pleasure trip or a (ahem) learning experience, your call.

Óscar Arías Sánchez, the former President of Costa Rica who won the Nobel Peace Prize for brokering peace in Nicaragua, when negotiations came to the tipping point, allegedly had all the assembled leaders (including himself) locked in in the conference room and gave orders for the doors only to be unlocked after he had communicated to his aides outside that a breakthrough had been reached. I don’t know whether that story is true, but I’d like to believe it is (it’s just too cool not to be).

I’ve long wanted to do the same thing to the leaders responsible for the world’s greatest crises (either for causing or for not doing their damnest to stop them): wars, terrorism, the spread of the pandemic, poverty, etc. (you see, I’m not picky). Though I wouldn’t give them a plush conference room with all mod cons to stew in, but one of the atolls in the Pacific Ocean where the U.S. and France (and other nations) used to conduct their nuclear experiments back in the 1950s, when environmental damage wasn’t a concern yet and nobody in government seemed to think anything much was wrong with that sort of thing … say Bikini or one of the Marshall Islands. For accommidation they’d have the nuclear-poisoned island itself, enriched by the set of Sartre’s Huis Clos (No Exit), i.e., only one chair — not a comfortable one — per person … and for company I’d give them a few of the villains from my favorite dysfunctional families, say Simeon Lee from Hercule Poirot’s Christmas, Mrs. Boynton from Appointment with Death, Adam Penhallow from Georgette Heyer’s novel of the same name, and sanctimonious old Joseph Herriard from Heyer’s Envious Casca to preside over the whole assembly.

Then I’d take cover and watch from a safe distance how long it would take for the whole thing to blow up.

(Spirit of the Season? Not this lady, this year …) 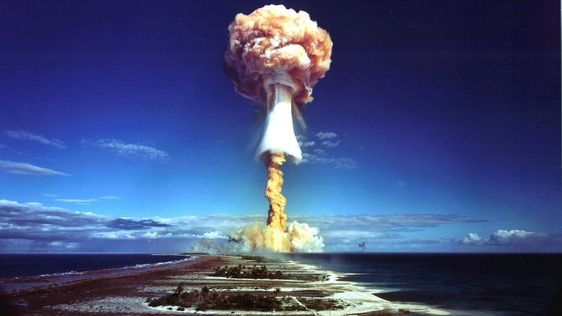