I’ve never paid the bragging rights thing much attention, but it turns out that both Bonn and Cologne (as well as the Rhine Valley as such) have claim to a whole bunch of “top whatever” honors.  To wit, inter alia (I’m going to put these onto the next page as there are a bunch of images that make the post look fairly long):

The enterprise of building such a huge, complex structure as Cologne Cathedral was viewed with a lot of superstitious misgivings in the Middle Ages; many saw it as a project driven by nothing but the master builder (= chief architect)’s sinful pride, pricked on by the devil himself.  When the builder, whom — although he was an acknowledged master of his art and Cologne Cathedral is not the only building testifying to his skill — we only know as Meister (Master) Gerhard, actually did fall to his death from the scaffolding, people said that the devil had come to claim his soul. 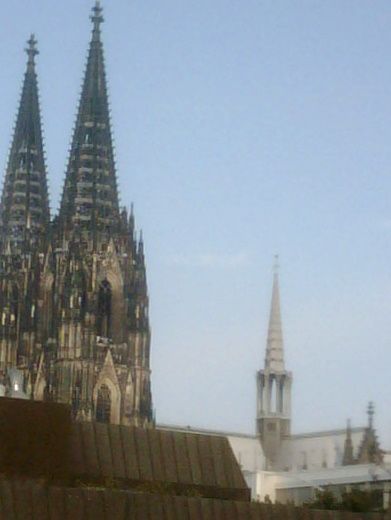 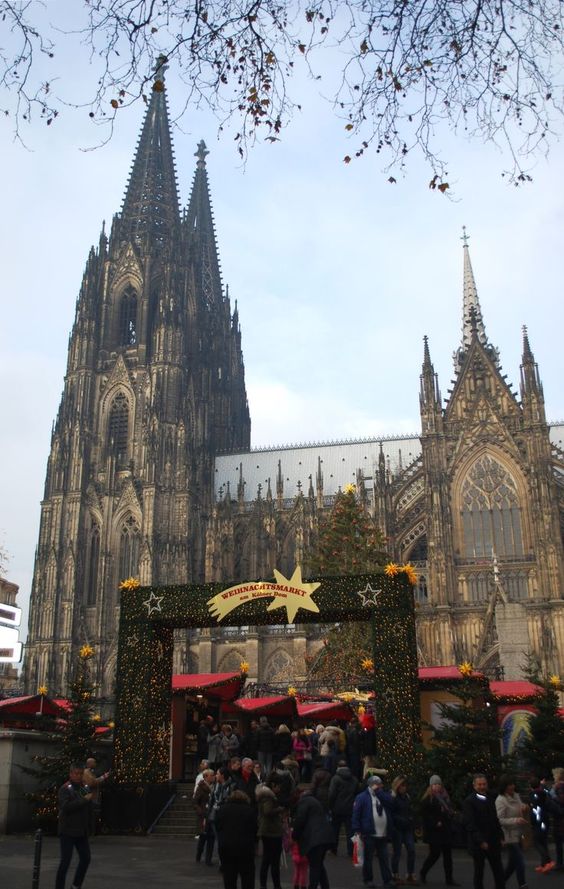 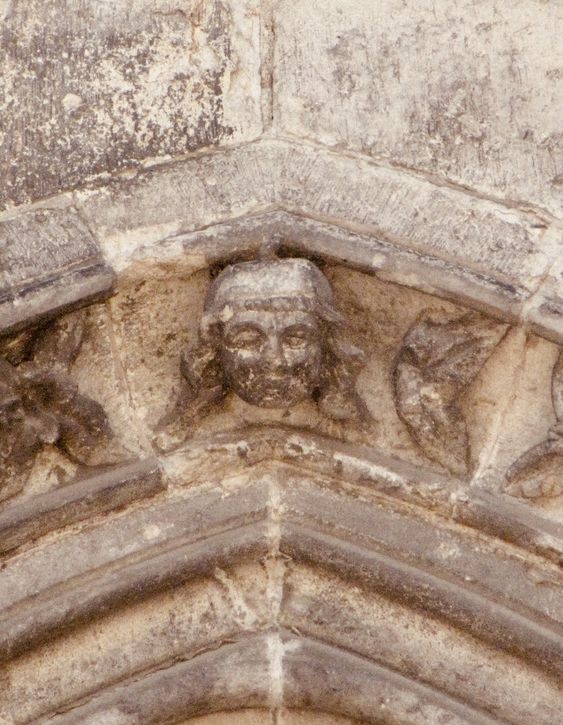 Cologne Cathedral (photos mine) /
depiction of Master Gerhard in the crest of a chapel window (source: Wikipedia) 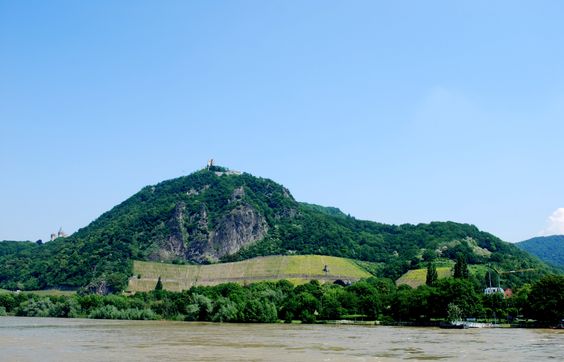 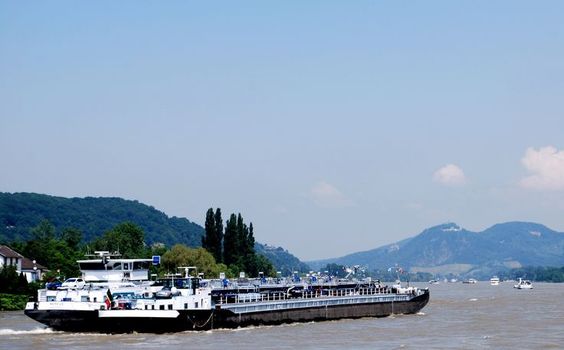 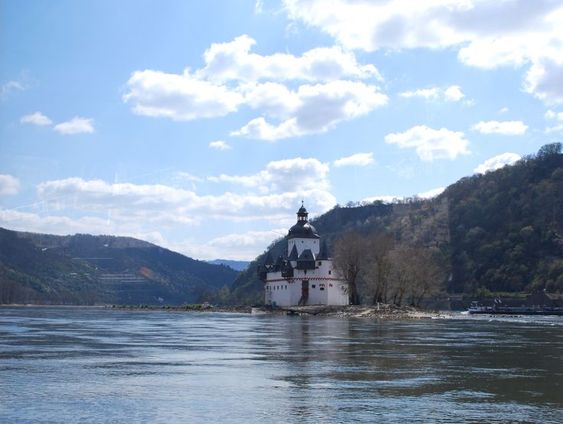 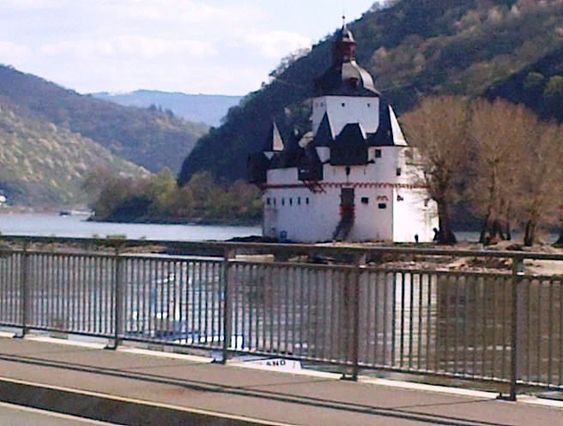 In the Rhine Valley (photos mine)

My eyes really zoomed in on my computer screen, however, when I saw a claim on Tripadvisor that Cologne’s Chocolate Museum is supposed to be “the first and only” chocolate museum in the world.  Turns out the “only museum” claim is a piece of bogus, breathtaking reviewer’s hyperbole — it took me mere minutes to find other chocolate museums in Hamburg, Halle, Brussels, Bruges, Kilchberg (Switzerland), Caslano (Switzerland), Paris, Prague, near Alicante (Spain), as well as in Uxmal (Mexico) and in Mexico City — and I’m sure in other parts of the world where cocoa is actually produced, there is the odd museum or three dedicated to the sweet stuff as well.  But it’s just possible that the Cologne museum is the oldest one in Germany and maybe in Europe, too.  At least I haven’t found any information on any of the others that would indicate that they were founded earlier than the one in Cologne (1993).  But then again, this is about chocolate … so who really cares which museum was the first one anyway, right?! 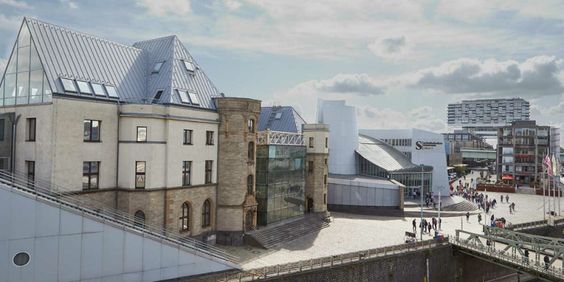 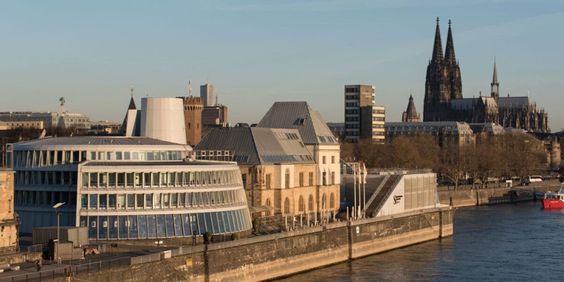 And a final item that you tend to see bandied about hereabouts sent me down a few rabbit holes as well, because this one I actually knew, having first learned about it in a local history museum that happens to be right on my own street:

Both Cologne and Bonn, being Roman foundations, are among Germany’s oldest cities: Official honors have not been awarded to any of the contenders, and precise dating is, even with the Roman genius for organization, iffy enough for (German) Wikipedia to flatly stay out of the debate, though other lists confidently claim that Worms (some 200 kms south of here) is the oldest of them all — however not on the strength of its Roman foundation but on that of a 5,000 B.C. Celtic settlement, with Bonn and Cologne allegedly following in either 3d and 4th place, or 2d and 6th place, respectively, depending what exact moment and occasion you consider their foundation.  If we are taking into account pre-Roman settlements, however, Bonn can easily hold its own with a claim of being a vastly older place of human settlement than Worms: Leaving aside that the name Bonn itself is probably of Celtic origin, in turn, and was adopted by the Romans when they built their first military forts here a decade or so B.C., the presence of even Stone Age humans on the territory of what is Bonn today is documented by the discovery of 50,000 year old hand axes in a neighborhood south of today’s city center; and even more so by the discovery, a century ago, of the “Oberkassel humans” (homo obercasseliensis): an Upper Paleolithic (ca. 12,000 – 14,000 B.C.) burial site containing the remains of a couple (a ca. 50 year-old man and a 20-25 year-old woman). as well as their pet dog (!), in Oberkassel, the neighboring suburb to the one where I live (and part of the same administrative city district).  And obviously, if these three were found in a grave, there had to be others who put them there: the grave was covered by heavy basalt slabs, which makes it impossible for one of the buried persons (or even both of them together) to have created the grave themselves prior to their death.   So there — take that, Worms and your 5,000 B.C. Celts … 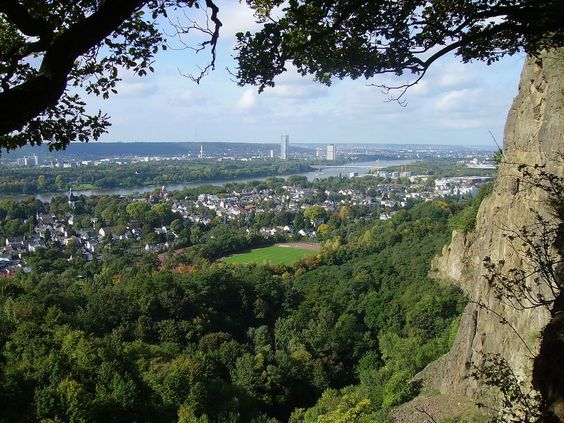 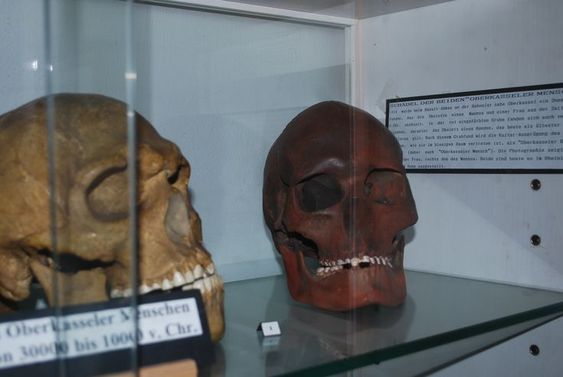 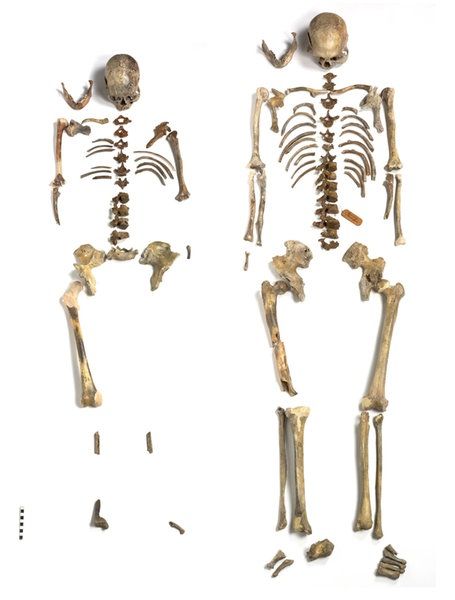 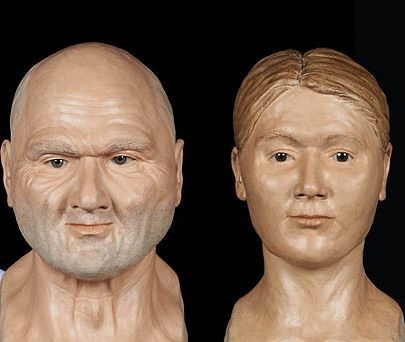 View from the abandoned quarry where the burial site was found (source: Wikipedia) / view towards the quarry and replicas of the “Oberkasel Humans”‘ skulls (photos mine) / the skeletons als laid out for an exhibition at the state-run museum dedicated to this area’s history and archeology.where the original skeletons are kept), and a facial reconstruction (image source) / memorial statue (source: Wikipedia) 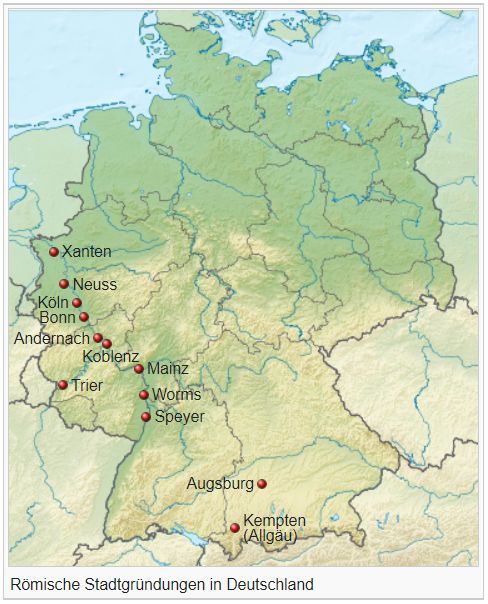 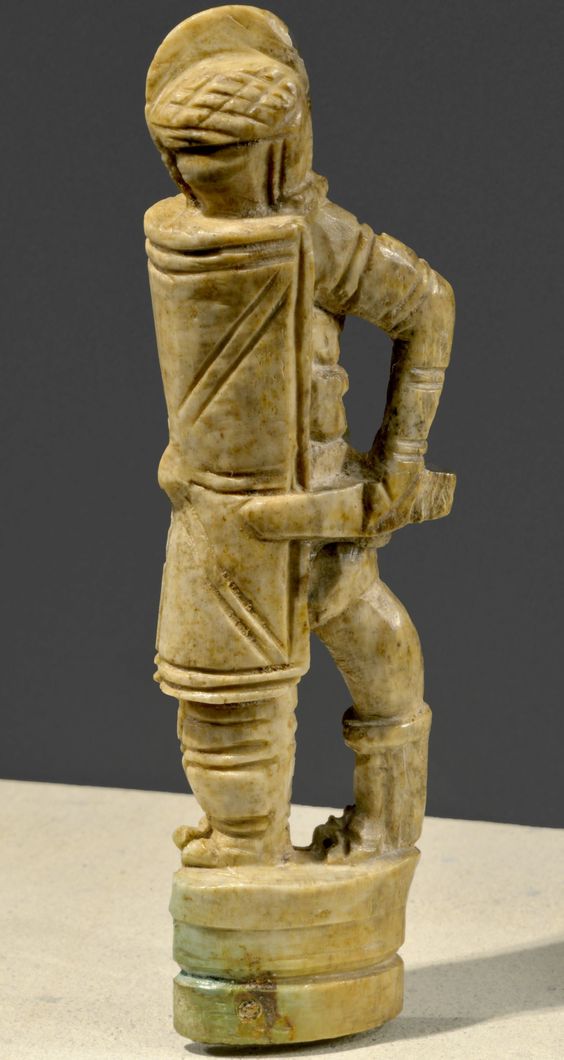 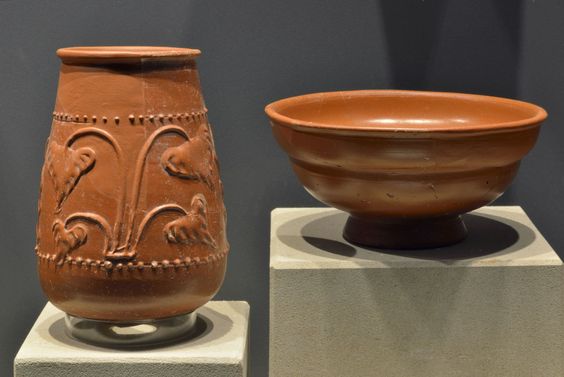 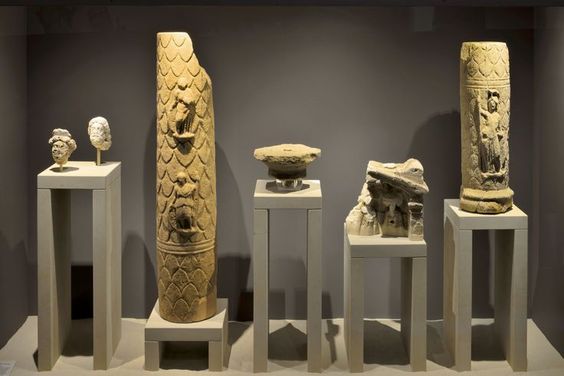 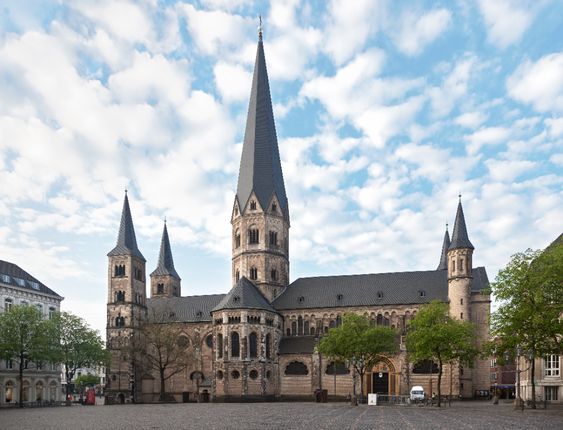 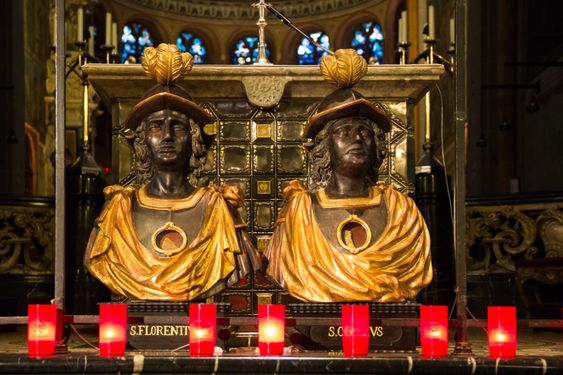 Bonn Cathedral, and the reliquaries of Bonn’s city patrons, Saints Cassius and Florentius, 3d century A.D. Egyptian-born Roman soldiers who had converted to Christianity and, having been sent to the Rhine province to help quell a rebellion, were executed for refusing to kill their fellow Christians.  Bonn Cathedral stands in the place of the original church that is believed to have been erected over their burial place
(Image source: Wikipedia here and here)