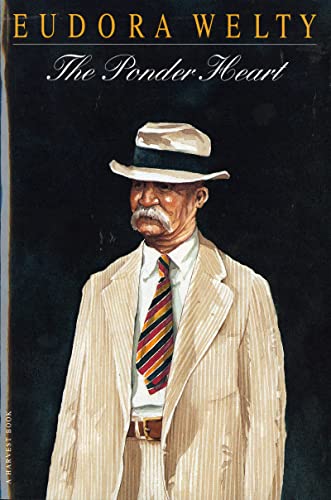 Keen observations in an exquisite piece of humorous Southern writing.

“The South impresses its image on the Southern writer from the moment he is able to distinguish one sound from another,” Flannery O’Connor wrote in her 1963 essay “The Catholic Novelist in the Protestant South,” and Eudora Welty expressed a similar sentiment roughly 20 years later in her memoir “One Writer’s Beginnings,” when she wrote that ever since she had first been read to, and then started to read herself, there had never been a line that she had not heard as her eyes followed the words on the page, possibly out of the desire to read as a listener. And indeed, as Flannery O’Connor also remarked in the above-mentioned essay, “the Southern writer’s greatest tie with the South is through his ear.”

While proof of the truth of these statements can be found throughout the literature written by both of these preeminent Southern novelists, Eudora Welty’s novella “The Ponder Heart” is perhaps one of the most obvious examples thereof as it is actually written in the form of a monologue, addressed to an imaginary traveler who happens to find himself – by force of circumstance rather than plan – in the small town of Clay, Mississippi, somewhere off the main highway and not quite halfway between Tupelo and the Mississippi-Alabama border, in Edna Earle Ponder’s Beulah Hotel; face to face with the hostess. “My Uncle Daniel’s just like your uncle, if you’ve got one … he loves society and he gets carried away,” she immediately tells her visitor about her Uncle Daniel’s “one weakness” and proceeds, without further ado, to tell her family’s story; thus proving herself afflicted by that same weakness of “getting carried away,” and as the reader/listener soon discovers, it is just as impossible to get a word in with her narrative as it is with Uncle Daniel Ponder.

But then, you don’t even really want to interrupt her: too often she makes you smile or laugh out loud at her descriptions of family and townsfolk, too much you are getting caught up in the story, and too acute is the appearance of her observations. For no doubt, Eudora Welty was not only a keen observer of Southern society; she also mastered the transformation of her observations into the written word with a skill matched only by a select few of her fellow Southern writers. And true to Welty’s reflection in her memoir – and to her desire to write as a listener, as much as she used to read as a listener – it is impossible not to actually hear Edna Earle talking to you as you turn the pages, in that unmistakable drawl which seems to roll past your ears languidly, much like the waves of the mighty Mississippi, and which smells of bourbon and magnolias.

Thus, in the space of less than 200 pages, we make the acquaintance of Grandpa Ponder, whose fortune would become Edna Earle’s to watch over and Uncle Daniel’s to give away, Uncle Daniel’s first wife Miss Teacake Magee née Sistrunk (who sang at her own wedding, which turned out to be bad luck because the marriage didn’t hold), his second wife Bonnie Dee Peacock (“a little thing with yellow fluffy hair,” white trash as trash can be, who after a couple months’ marriage “on trial” declared the trial over and left town, but was later lured back to Clay, much to her own misfortune) and of course Uncle Daniel himself, a big man with a big heart and only seemingly a simple soul who constantly needs minding, first by his father (Grandpa Ponder), then by Edna Earle – but who surprises you again and again with his unexpected, only half-conscious witticisms and insights: a veritable court jester in the medieval tradition with the flair of a 20th century gentleman raised in the traditions of the old South. And the story that unfolds before your eyes and ears is as colorful as its protagonists, from Uncle Daniel’s early commitment to an asylum to his trial for Bonnie Dee Peacock’s murder, with an outcome as wildly unexpected as only Daniel Ponder could have caused it.

Flannery O’Connor, who likewise created many a character who could have populated the world of Eudora Welty’s “The Ponder Heart,” said that whenever she was asked why Southern writers in particular seemed to have a tendency to write about freaks, this was “because we are still able to recognize one.” She warned, however, that outlandish as they might be, the heroes of modern Southern literature are not primarily intended to be comic but rather, prophetic figures reminding us of a long-forgotten responsibility, and she noted that any fiction coming out of the South was invariably liable to be called “grotesque,” unless it actually was grotesque, in which case it would be called “photographic realism.” (“The Catholic Novelist in the Protestant South.”) And Eudora Welty, whose keen sense of observation in fact did find expression not only in her writing but also in a number of celebrated collections of photography, called location, in an essay written the same year as “The Ponder Heart,” “the crossroads of circumstance” and “the heart’s field;” intrinsically linked to the emotions and experiences described in any good piece of fiction writing. (“Place in Fiction,” 1954.) In that sense, “A Ponder Heart” is a piece of Southern fiction in the best literary tradition – in addition to which, it is a pure delight to read.