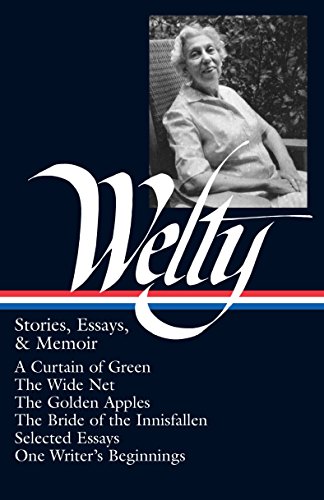 Creations of a Unique Voice

“Listening,” “Learning to See” and “Finding a Voice,” Eudora Welty entitled the three chapters of her autobiography “One Writer’s Beginnings,” the concluding entry in this collection, one of the two Library of America compilations dedicated to her work. And while these may be steps that most writers will undergo at some point, Welty’s compact autobiography is notable both because it allows a rare glimpse into the celebrated writer’s otherwise fiercely protected private life and it illustrates the roots from which sprang such extraordinary protagonists as “The Ponder Heart”‘s Edna Earle and Daniel Ponder, Miss Eckhart and the Morgana families in “The Golden Apples” and, of course, the anti-heroes of her Pulitzer Prize winning novel “The Optimist’s Daughter,” Judge McKelva, his second wife Fay and (most importantly) his daughter Laurel.

A native and – with minimal exceptions – lifelong resident of Jackson, Mississippi, Welty received her first introduction to storytelling as a listener; and early on, learned to sharpen her ears not only to a story’s contents but also to its narrator and its protagonists’ individual nature: “[T]here [never was] a line read that I didn’t hear,” and “any room … at any time of day, was there to read in, or to be read to,” she notes in “One Writer’s Beginnings,” adding that the discovery that all those stories had been written by someone, not come into existence of their own, not only surprised but also severely disappointed her. Equally importantly, family visits to relatives brought out the born observer in her; each trip providing its own lessons and revelations, each a story onto itself – the seed from which later grew the literary creations collected in this compilation and its companion volume. At the same time, her father’s interest in technology introduced her to photography as a means of capturing visual impressions, one moment at a time; and when traveling around Mississippi as an agent for a state agency (her first job) she learned to use that camera as “a hand-held auxiliary of wanting-to-know” and discovered that “to be able to capture transience, by being ready to click the shutter at the crucial moment, was [then] the greatest need I had” (“One Writer’s Beginnings:” Not surprisingly, her photography was published in several collections which have found much acclaim of their own.)

Thus, from early childhood on, Eudora Welty not only had a keen sense of the world around her but also, of words as such: of their existence as much as the interrelation between their sound, physical appearance and the things they stand for. Encouraged by her mother, a teacher, and over her father’s worries (he considered fiction writing an occupation of dubitable financial promise and, worse, inferior to fact because it was “not true”) Welty embarked on a writer’s path which would lead her to award-winning heights and to a reputation as one of the South’s finest writers, with as abounding as obvious comparisons to fellow Mississippian William Faulkner in particular; a literary debt she acknowledged when she wrote that “his work, though it can’t increase in itself, increases us” and “[w]hat is written in the South from now on is going to be taken into account by Faulkner‘s work” (“Must the Novelist Crusade?”, 1965). The Library of America dedicated two volumes to her work; one containing her novels, the other – this one – her short stories, essays (some, like her autobiography, based on a series of lectures) and her autobiography.

An approach that Welty developed early on was to consider the publication of her stories in periodicals merely a step towards each story’s final shape, and she generally revised her stories before including them in collections. This compilation brings together all her short stories in the versions intended to be final by Welty herself: the 1941 edition of “A Curtain of Green and Other Stories” (her first short story collection), the 1943 edition of “The Wide Net and Other Stories” and the 1949 edition of “The Golden Apples” – each collection suffered substantial editorial revisions in subsequent publications. Included are also two stand-alone short stories (“Where is This Voice Coming From?” and “The Demonstrators”), the first one inspired by the 1963 murder of Mississippi NAACP leader Medgar Evers and revised by Welty over the telephone after having been accepted by “The New Yorker,” to avoid a potentially prejudicial effect of its original ending on the then-impending trial.

A keen observer, Welty was also a writer endowed with a sharp sense of humor and satire, and with the gift to brilliantly use location, localisms, accents, patterns of speech and customs to make a point. Not a single word is wasted: “Marrying must have been some of his showing off – like man never married at all till he flung in,” we’re told about King MacLain in the opening story of “The Golden Apples,” “Shower of Gold.” And you don’t have to learn anything more about the man, do you? Equally as instructive on Welty’s writing are the eight essays included in this collection, all taken from the 1978 compilation “The Eye of the Story” and dealing with particular aspects of her own fiction as much as, more generally, with “Place in Fiction” (1954) and the fiction writer’s role (“Writing and Analyzing a Story,” originally published in 1955 under the title “How I Write” and substantially revised for its inclusion in “The Eye of the Story” and “Must the Novelist Crusade?”).

“There is no explanation outside fiction for what its writer is learning to do,” Eudora Welty maintained in “Writing and Analyzing a Story;” explaining that each story references only the writer’s vision at the moment of the creation of that story, and the creative process itself: nothing that can be “mapped and plotted” but a product taking shape in the process of creation itself, giving each story a unique identity of its own. And while her fiction, alas, can no longer grow any more than Faulkner‘s, she has left us enough of those unique creations to cherish for a long time to come.