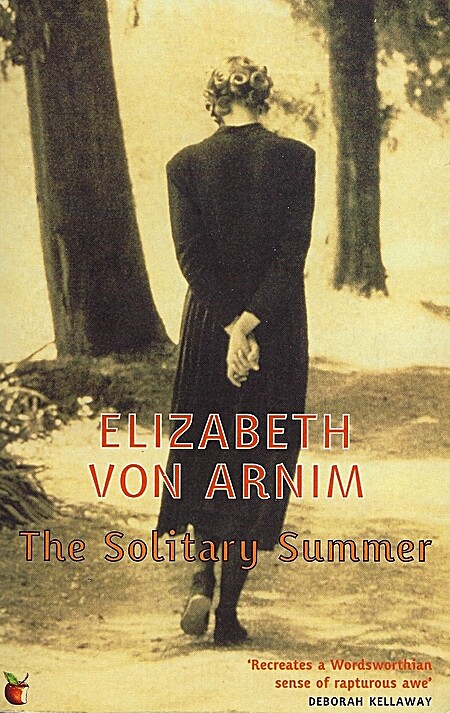 “Last night after dinner, when we were in the garden, I said, ‘I want to be alone for a whole summer, and get to the very dregs of life.  I want to be as idle as I can, so that my soul may have time to grow.  Nobody shall be invited to stay with me, and if any one calls they will be told that I am out, or away, or sick.  I shall spend the months in the garden, and on the plain, and in the forests.  I shall watch the things that happen in my garden, and see where I have made mistakes.  On wet days I will go into the thickest parts of the forests, where the pine needles are everlastingly dry, and when the sun shines I’ll lie on the hearth and see how the broom flares against the clouds.  I shall be perpetually happy, because there will be no one to worry me.  Out there on the plain there is silence, and where there is silence I have discovered there is peace.”

So The Solitary Summer was to be von Arnim’s Walden …

And I love how she contrasts her own initial gush of enthusiasm with her husband’s response:

“‘Mind you do not get your feet damp,’ said the Man of Wrath, removing his cigar.”

And you really wouldn’t be able to tell this from the exuberant prose, but this is how the book actually came about (quoting from the introduction by Deborah Kellaway):

“The book was written patchily, and against the odds.  The beautiful promise of summer weather in May that year was followed by ruinous screaming gales.  She did not start writing until July, and in August she took the children away for a seaside holiday.   In September her relations with her husband became so full of ‘wrath’ that she took herself, alone, to England.  When she returned to Nassenheide, she brought her sister and niece with her; she did not begin to write again until cold November; by December, she discovered her pregnancy with a heavy heart.  But she finished the book in January, corrected the proofs in February, and The Solitary Summer, light hearted and ebullient, was in the bookshops by the following May.”