A murder is committed — and hilarity ensues 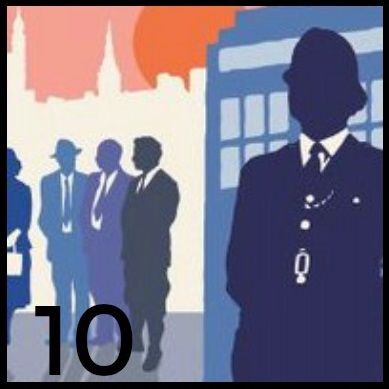 Both Edmund Crispin’s Moving Toyshop and Alan Melville’s Quick Curtain are mentioned in the “Making Fun of Murder” chapter of Martin Edwards’s Story of Classic Crime in 100 Books.  Both are excellent examples of writers taking something as horrific as murder and turning it right around and into a farce, albeit (as Dorothy L. Sayers remarked in her review of Melville’s book) at the expense of a realistic description of proper police procedure.  But then, a surfeit of realism isn’t necessarily what either of these authors was aiming for.

Which doesn’t mean that their observations on society, or the segment thereof being portrayed (academia in Crispin’s case, the world of showbiz and the theatre in Melville’s) aren’t spot on satire.  In fact, if read in that spirit, they are, in many respects, as timely today as they were when originally written:

“Tuesday, June 18th, you will have noticed, was the great day [of the musical company’s London opening].  On Sunday, June 16th, when most of the Blue Music company were still in Manchester […], seven grim females parked seven rickety campstools outside the gallery entrance of the Grosvenor Theatre.

They were joined a little later in the evening by four more females and a lone male.  They unpacked sandwiches and munched.  They uncorked thermos flasks and drank hot coffee out of the aluminium tops of the flasks.  They discussed with one another Mr. Douglas, Miss Astle, Mr. Baker, Mr. Douglas’s past successes, Miss Astle’s last divorce, Mr. Baker’s profile — both the port and the starboard view.  They half slept.  They suffered endless agonies on their stupid, unreliable campstools; they each contracted stiff necks and shooting pains in the lower reaches of the spine; they were photographed for their pains by a man in a dirty waterproof and appeared on the back page of the Daily Post under the title ‘Gallery Enthusiasts’ Three-Day Wait for New Douglas Show.’  They were still there on Tuesday morning, proudly in the van of a fair-sized queue.”

Harry Potter and Apple gadgets, anyone? 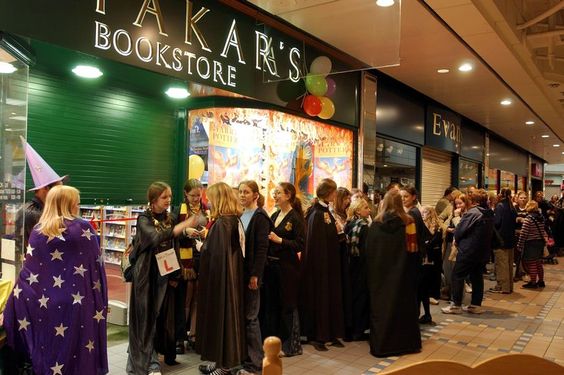 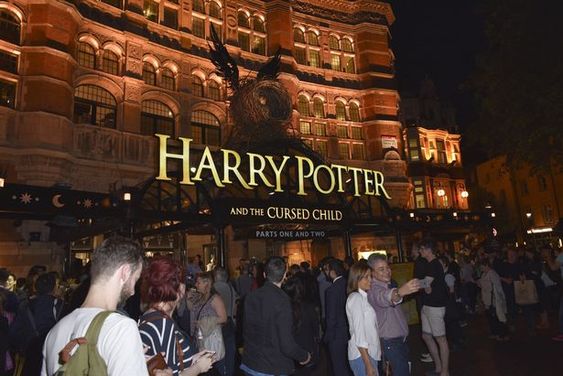 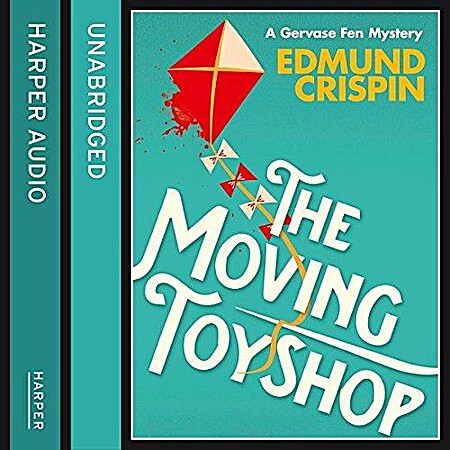 Edmund Crispin’s Moving Toyshop concerns the temporary metamorphosis of a grocer’s shop into (you guessed it) a toyshop for purposes of the concealment of the scene of a murder; a plan that goes haywire when one of the book’s two protagonists, a poet friend of Oxford don (and star of this book series) Gervase Fen, accidentally stumbles into the temporarily morphed shop, shortly after the dastardly deed has been committed.  Crispin’s particular forte were hilarious chase scenes, of which this book contains several, perhaps the most notable being the two amateur sleuths’ chase after a young woman in the midst of the Oxford Händel Society’s rehearsal of Brahms’s Schicksalslied in the Sheldonian Theatre:

“The girl with the blue eyes and the golden hair was embedded in the very middle of the altos, and there was no way to get near her except through the basses, who stood nearby, behind the orchestra.  Accordingly, they hacked out a path between the instrumentalists, under the envenomed gaze of Dr Artemus Rains [the conductor].  The second horn, a sandy, undersized man, went quite out of tune with indignation.  Brahms thundered and trumpeted about their ears. ‘Blindly,’ the chorus roared, ‘blindly from one dread hour to another.’  They knocked over the music-stand of the tympanist, sweating with the efford of counting bars, so that he failed to come in at his last entry.

The haven of the basses achieved at last, a number of further difficulties presented themselves.  The Sheldonian is not particularly spacious, and the members of the large choir have to be herded together in conditions not unreminiscent of the Black Hole of Calcutta.  When Fen and Cadogan, pushing, perspiring, and creating a great deal of localized pother, had penetrated the basses to a certain distance (Cadogan shedding wicker basket, bootlaces, and dog-collar broadcast as he went) the could literally get no farther; they were wedged, and even the avenue by which they had come was now irrevocably closed and sealed. […]

Dr. Rains leaned his spidery form forwards across the rostrum. ‘Professor Fen –‘ he began in a silky voice.

But he was not allowed to finish.  The girl with the blue eyes, profiting by this sudden focusing of attention, had pushed her way through the altos and was now heading at a brisk pace towards the door.  Unnerved by this fresh interruption, Dr Rains swung round to glare at her.  Fen and Cadogan got on the move again with alacrity, clawing their way back through the basses and the orchestra without ceremony or restraint.  But this process delayed them, and the girl had been out of the hall at least half a minute by the time they reached open ground.  Dr. Rains watched them go with a theatrical expression of sardonic interst.

‘Now that the English Faculty has left us,’ Cadogan heard him say, ‘we will go back to the letter L.’ The rehearsal started afresh.”

I’ve yet to see the BBC TV adaptation of this, but if handled well, this is not the only scene that would have made for much hilarity, never mind the novel’s otherwise somewhat thin plot. 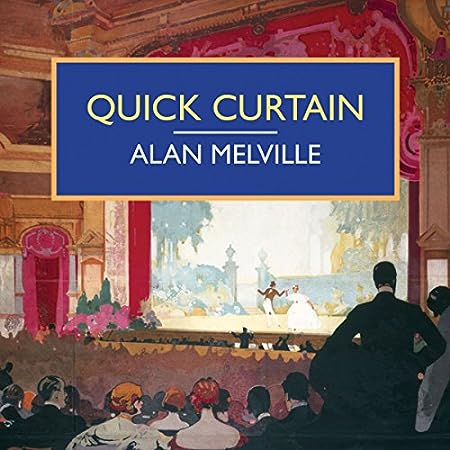 Alan Melville’s Quick Curtain is, as shown already in the excerpt further above, a satire on the world of 1930s theatre and showbiz, where a murder occurring at the focal point of a bestselling new musical comedy is investigated (with many quips and witty asides) by a policeman and his journalist son.  Obviously, this premise in and of itself is more than merely a little preposterous, even for the 1930s, but if you’re able to get past this point (Ms. Sayers obviously wasn’t) and past the fact that the central plot device has been used about a million times since, there is much to enjoy here — and Melville, who knew the world he was describing inside out, certainly doesn’t mince words when it comes to the characterization of the chief players who, like those of another theatre insider turned mystery writer of the day, Ngaio Marsh, are thinly veiled take-downs on several real life stars — yet Melville (like Marsh) kept the allusions just on the right side of the generic and light-hearted, without ever descending into outright character assassination.  (Well, he was making a living in that very world himself, after all.)  And he also managed to maintain his light, almost absurdist approach right until the end: Think a Golden Age mystery always ends with a pat and neat solution?  Think again.  Even if there is such a thing as the standard-issue conclave in the 23:45th-ish hour …

Festive Tasks Master Update Post HERE   Task 3: “Whenever five or six English-speaking people meet round a fire on Christmas Eve, they start telling each other ghost stories,” humorist Jerome K. Jerome wrote in his 1891 collection, Told After Supper. “Nothing satisfies us on Christmas Eve but to hear each other tell authentic anecdotes about […]

Festive Tasks Master Update Post HERE Same approach as for Like for Doors 7 (Gifts), and 13 (Holiday Shopping): one page per task.   Task 1: Do you still send holiday cards? Do you go for amusing, inspirational, or make your own? I used to love sending holiday cards and spent a lot of time […]

This was supposed to be the BL community’s first buddy read on the new site, but unfortunately it quickly ended up being a DNF for me.  Though after nobody else seems to have liked all of the book, either, I at least don’t feel like a spoil-sport anymore. I guess that’s something after all — […]