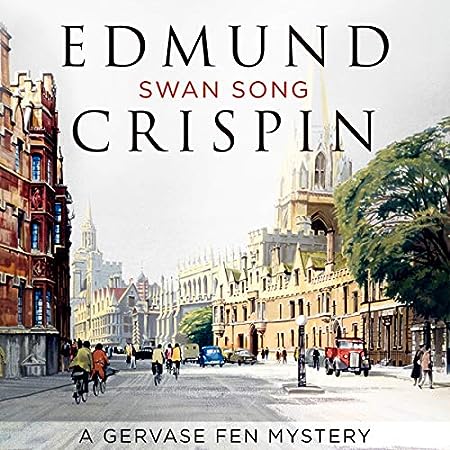 As part of my Detection Club reading project, I am slowly and intermittently making my way through Edmund Crispin’s Gervase Fen series: not, so far, in publication order, which hasn’t made much of a difference in the books I’ve read to date, though in this particular instance I was glad I’d already read the preceding volume, The Moving Toyshop, as there are quite a number of cross references — not in terms of plot points that become unintelligible if you haven’t read the earlier book, but in the form of recurring characters, as well as the odd snippet of dialogue.

Both the tone and the pacing here are quite different from that in The Moving Toyshop, however; even though the two books were published only a year apart and Swan Song is actually the later of the two, it almost seems like WWII and its aftermath had caught up with Crispin with a one-year delay: While The Moving Toyshop proceeds, sometimes quite literally, at breakneck speed and lives primarily off its characters’ witty repartee, Swan Song is (as the title indicates) in many respects an elegy; and by far its most interesting character a Jewish opera producer who has fled from the Nazis and found refuge in Oxford, but — while grateful to the town’s university for helping him build a new life — nevertheless mourns the lost world of the German music and theatrical scene, destroyed by the Nazis and the war; including and in particular the bombing of Dresden by — chiefly — British and American planes: for a book published in 1947 Britain, quite an unusual stance to take. Interestingly, too, this gentleman is a fan of Richard Wagner’s music, having met the composer in person, and it is he who is instrumental in getting together the production of Wagner’s Die Meistersinger von Nürnberg which ends up being bedeviled by murder.  Here’s how he sums up his life for Fen:

“My whole life has been opera — and Wagner in particular, selbstverständlich. If my father had afforded to give me the musical education I should myself have been a conductor. But I began to learn too late. So I have always been régisseur, or producer, or call-boy. At the Weimar opera, when I was sixteen, I was call-boy … After that I was in many of the German opera-houses, and for a time in America. When the Nazis came I was too old for their ideas,* and I hated that such fools should worship the Meister. I had preferred that they banned his performances. So I worked here, and then there was the war, and fools said: ‘Because Hitler is fond of Wagner we will not have Wagner in England.’ Hitler was also fond of your Edgar Wallace, with his stories of violence, but no one said that they were not to be read … Now it is better, and soon I shall return to my own country. But there is no Wagner there, and before I die I must hear the seven great operas once again. So at present I stay in England.”

(By the by: neatly-done Detection Club dig at Edgar Wallace there, too, Mr. Crispin.)

Like The Case of the Gilded Fly, this book showcases how well Crispin was familiar with the world of the theatre; similar to Ngaio Marsh and for a related reason — in his “other” life, Edmund Crispin (real name: Robert Bruce Montgomery) was a composer, whose perhaps most lasting successes include a plethora of film scores; notably the theme music and several full episode scores for Carry On (for at least one of the episodes he also provided the screenplay). Given this mystery’s setting, here more than in any other book from the series an at least basic familiarity with classical composers and musical styles helps you to follow the dialogue, but there’s plenty to enjoy here, too, if music is a sealed book to you. The solution suffers a bit from the Golden Age authors’ tendency to outdo each other in intricate scenarios in order to satisfy their reading public’s corresponding demands, but all told it’s not as unlikely as some other solutions from the same period; and it fits the tone of the book fairly well in not exactly providing a neat wrap-up.

Given this book’s main theme, I’m obviously using it for Festive Tasks: Door 8 — Music: Read a book where the plot involves music or the people who perform or write it; or read a non-fiction memoir by a musician.

* Note: Baffling though it may seem in hindsight, an initial openness to engage with the Nazi ideology was not an unusual stance for a Jewish musician in Nazi-era Germany to take: There was an organization called “Jüdischer Kulturbund” (or “Kubu” ,for short) formed in 1933, which set out to represent the interests of Jewish musicians, actors, and other performing artists, and which the Nazis tolerated and — for a time — even promoted, so as to camouflage their agenda in the early years. (Doubtlessly, they also saw it as a handy tool to track a great number of Jews belonging to one particular profession all in one place and one single membership register.) The “Kubu” was not a Nazi organization, but the people who ran it tricked themselves and their members into honestly and naively believing that they enjoyed the Nazi government’s special protection, on account of their artistic contributions to life in Germany. — Martin Goldsmith, whom the Americans on this site may remember as a classic music radio presenter (inter alia, on NPR), wrote a biography of his parents called The Inextinguishable Symphony; and he touches on the “Kubu” in some detail because that was where his parents had met.

A reference to many German Jewish artists’ initial stance on the Nazis, if only by a veiled allusion, shows just how well-informed Crispin was with regard to the German musical scene of his time.