Edith Wharton: The Age of Innocence 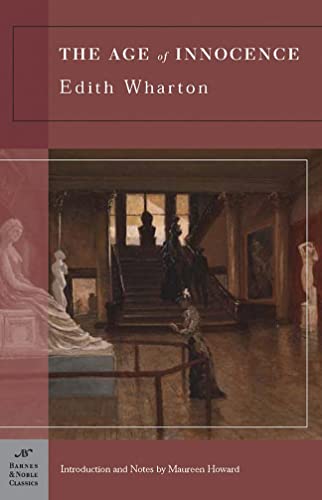 Love, Loneliness, and the Strictures of Society

Such, in faithful imitation of Victorian England, was the society of late 19th century upper class New York. Into this society returns, after having grown up and lived all her adult life in Europe, American-born Countess Ellen Olenska, after leaving a cruel and uncaring husband. She already causes scandal by the mere manner of her return; but not knowing the secret rituals of the society she has entered, she quickly brings herself further into disrepute by receiving an unmarried man, by being seen in the company of a man only tolerated by virtue of his financial success and his marriage to the daughter of one of this society’s most respected families, by arriving late to a dinner in which she has expressly been included to rectify a prior general snub, by leaving a drawing room conversation to instead join a gentleman sitting by himself – and worst of all, by openly contemplating divorce, which will most certainly open up a whole Pandora’s box of “oddities” and “unpleasantness:” the strongest terms ever used to express moral disapproval in this particular social context. Soon Ellen, who hasn’t seen such façades even in her husband’s household, finds herself isolated and, wondering whether noone is ever interested in the truth, complains bitterly that “[t]he real loneliness here is living among all these kind people who only ask you to pretend.”

Ellen finds a kindred soul in attorney Newland Archer, her cousin May Welland’s fiancé, who secretly toys with a more liberal stance, while outwardly endorsing the value system of the society he lives in. Newland and Ellen fall in love – although not before he has advised her, on his employer’s and May and Ellen’s family’s mandate, not to pursue her plans of divorce. As a result, Ellen becomes unreachable to him, and he flees into accelerating his wedding plans with May, who before he met Ellen in his eyes stood for everything that was good and noble about their society, whereas now he begins to see her as a shell whose interior he is reluctant to explore for fear of finding merely a kind of serene emptiness there; a woman whose seemingly dull, passive innocence grinds down every bit of roughness he wants to maintain about himself and who, as he realizes even before marrying her, will likely bury him alive under his own future. Then his passion for Ellen is rekindled by a meeting a year and a half after his wedding, and an emotional conflict they could hardly bear when he was not yet married escalates even further. And only when it is too late for all three of them he finds out that his wife had far more insight (and almost ruthless cleverness) than he had ever credited her with.

Winner of the 1921 Pulitzer Prize and the first work of fiction written by a woman to be awarded that distinction, “The Age of Innocence” is one of Edith Wharton’s most enduringly popular novels; the crown jewel among her subtly satirical descriptions of New York upper class society. By far not as overtly condemning and cynical as the earlier “House of Mirth” (for which Wharton reportedly even saw this later work as a sort of apology), “The Age of Innocence” is a masterpiece of characterization and social study alike: an intricate canvas painted by a master storyteller who knew the society which she described inside out, and who, even though she had moved to France (where she would continue living for the rest of her life) almost a decade earlier, was able to delineate late 19th century New York society’s every nuance in pitch-perfect detail, while at the same time – seemingly without any effort at all – also blending together all these minute details into an impeccably composed ensemble that will stay with the reader long after he has turned the last page.