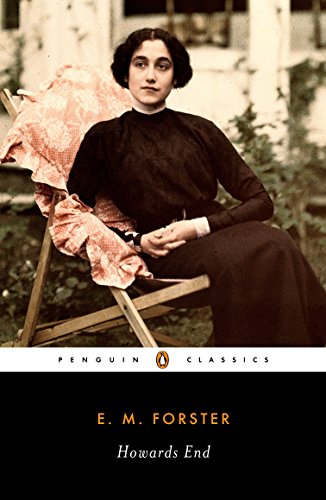 But will it really? Unbeknownst to Ruth’s family, the issue is put into question when Ruth forms a friendship with her neighbor-to-be Margaret Schlegel, like Ruth herself from a middle class background but nevertheless separated from Ruth’s world by several layers of society and politics: That of the Wilcox is epitomized by pater familias/businessman Henry – rich, conservative and without any sympathy whatsoever for those less fortunate than themselves (“It’s all part of the battle of life … The poor are poor; one is sorry for them, but there it is,” Henry Wilcox once comments); while the Schlegels, on the other hand, have just enough income to lead a comfortable life, were brought up by their Aunt Juley, support suffrage (women’s right to vote) and surround themselves with actors, “blue-stockings” (feminists), intellectuals and other members of the avantgarde. Further complexity is added when Margaret’s sister Helen brings to the Schlegel home Leonard Bast, a poor but idealistic young clerk who loves music, literature and astronomy – and with him, his working class wife Jacky, the embarrassment of having to interact with her, and the even more embarrassing revelation which she has in store for Henry Wilcox; eventually leaving her disillusioned husband to comment that “books aren’t real,” and that in fact they and music “are for the rich so they don’t feel bad after dinner.”

An allegory on the question who will ultimately inherit England – the likes of the Wilcox, the Schlegels, or the Basts – E.M. Forster’s novel is one of the early 20th century’s finest pieces of literature; a masterpiece of social study and character study alike, in which the author brings his protagonists and their environment to life with empathy and a fine eye for detail. The story’s strongest character is undoubtedly Margaret Schlegel, a young woman “filled with … a profound vivacity, a continual and sincere response to all that she encounter[s] in her path through life,” as Forster describes her, and whose friendship with Ruth Wilcox, even at the beginning, already brings the two families back together again after Helen has endangered their as-yet tentaive acquaintance by engaging in a near-scandalous affair with Ruth’s younger son Paul.

Ultimately, Margaret and Ruth become so close that Ruth eventually decides to give Meg “something worth [her] friendship” – none other than Howards End, a wish that has her panicking family scramble most ungentlemanly for every reason in the book to invalidate the codicil setting forth that bestowal, from its lacking date and signature to the testatrix’s state of mind, the ambiguity of the writing’s content, the question why Meg should want the house in the first place since she already has one, and the fact that the writing is only in pencil, which “never counts,” as Dolly, wife of the Wilcox’ elder son Charles is quick to point out, only to be reprimanded by her father in law “from out of his fortress” (Forster) not to “interfere with what you do not understand.” And so it is that Meg will only see the house (and be instantly mistaken for Ruth because she has “her way of walking around the house,” as the housekeeper explains) when she and her siblings have to look for a new home and Henry Wilcox, who has started to court her after Ruth’s death, suggests that the Schlegels’ furniture be temporarily stored there – a fateful decision. And while Meg and Henry slowly and painfully learn to adjust to each other, the complexity of their families’ relations, and their interactions with the Basts, finally come crashing down on them in a dramatic conclusion.