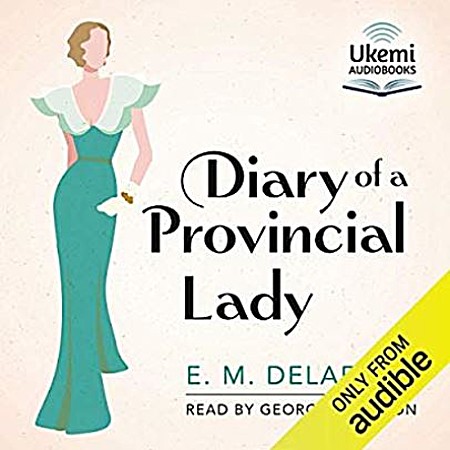 E.M. Delafield’s Diary of a Provincial Lady was to the 1930s what Bridget Jones’s Diary is to us: Roll up Angela Thirkell’s High Rising, Winifred Holtby’s South Riding, and Helen Fielding’s Bridget Jones’s Diary into one, shake thoroughly, season with a pinch or three of Emma Thompson’s character (the Duchess d’Antan) from the movie Impromptu, and with the perpetual financial woes of the landed gentry, and this (albeit largely autobiographical) book is pretty much what you should get as a result.

Delafield, one of those prolific early 20th century writers who thoroughly dropped off the radar after WWII, went on to write several more installments of the Diary: I got curious about her because of Martin Edwards’s speculation, in The Golden Age of Murder, about a possible relationship between her and Anthony Berkeley, but having read this book by her and several books by him, I can’t see more than the friendship between them that is known to actually have existed.  Quite frankly (and quite apart from the fact that they were both married to other people to begin with), judging by her writing, she strikes me as way too shrewdly intelligent to ever have been interested in him as anything other than a friend.

0 thoughts on “E.M. Delafield: Diary of a Provincial Lady”