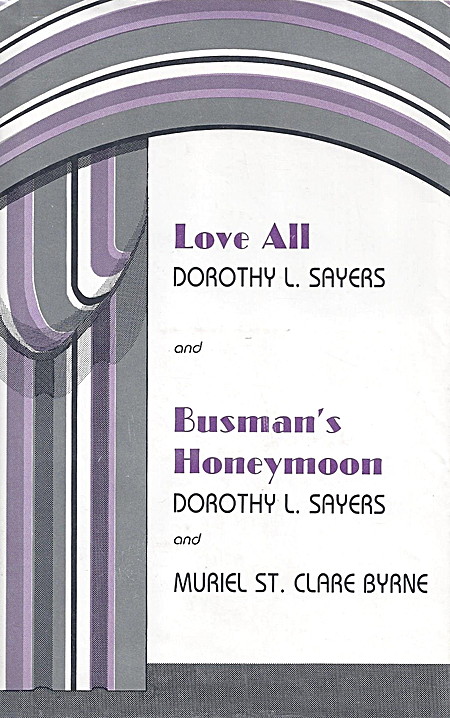 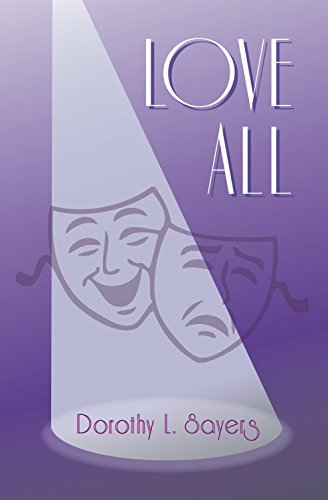 When I bought the joint edition of Busman’s Honeymoon and Love All (published in 1980), the obvious pièce de résistance, for me, and the reason why I spent some time hunting down an affordable copy at all, was the stage version of Busman’s Honeymoon – the final full-length outing of Lord Peter Wimsey and Harriet Vane (later transformed into a novel of the same name) and just about the last published bit from Dorothy L. Sayers’s own pen still lacking in my collection, at least as far as Lord Peter and Harriet are concerned. Love All, in comparison, looked like an also-ran – interesting, certainly, but surely no dice on the star turn of Sayers’s recently-married supersleuths?

Ostensibly, Love All (which Sayers co-wrote with her Somerville College friend Marjorie Barber, and which in an unpublished manuscript version bears the alternative title Cat’s Cradle) is a drawing room comedy, set first in Venice and later in London – but Sayers wouldn’t be Sayers if a drawing room comedy was all she had given us here. In fact, this is the theatrical expression of the thoughts also expressed in the two addresses jointly reproduced under the title Are Women Human? – that it is women’s given right as human beings to live a fully realized life, which most definitely includes the right to choose their own professional path, and the freedom not to have to place a man’s needs and demands over their own (as, however, so many of her female contemporaries had to do). — I’d call the play feminist if Sayers hadn’t hated that term, but whatever label you want to stick on it, its message comes through loud and clear and with plenty of laughs.

Love All was never published in printing during Sayers’s lifetime and only had a limited stage exposure outside of London (and none at all in London itself); possibly as a result of clashing – as Sayers herself put it – on its opening night “with Mr. Hitler’s gala performance in Norway and Denmark” (i.e., the Nazis’ 1940 invasion of Norway). Another reason may have been the strictures imposed by Sayers’s son Anthony Fleming, who – jealously protective of his mother’s standing as a writer – even in the play’s 1980s’ “resurrection” prohibited any editorial reference to Sayers’s private life or to himself, even though the play features a young boy brought up by relatives in the country while his mother is pursuing a literary career in London. And according to the play itself, he definitely had a point; the boy’s mother, a successful dramatist, is observed rebutting a journalist (on the phone): “Oh, no, Mr. Mackenzie – Not the personal angle, please. No, really, what has one’s private life to do with one’s work? Well, I daresay that is the question, but I don’t want to discuss it.”

Whatever the reasons for the play’s having been allowed to slip into oblivion, it is a pity that this should have happened, as Love All compares more than favorably with other plays in a similar vein that actually have survived until today. – As the alternative title suggests, to even try and sum up the plot would be giving away major plot points, so I’m just going to end with a few of my favorite quotes:

“LYDIA: I thought it would be nice to marry Godfrey […] his books were so thrilling. They made me go all soppy, only he isn’t really a bit like his books.
JANET: Authors never are. They write themselves out into their books, and the real person is just the odds-and-ends left over.”

“LYDIA: And after dinner he’d read me what he’d done.
JANET: Just so. And ask for your opinion and advice.
[…]
LYDIA: Sometimes I tried disagreeing with something for a change.
JANET: How did that work?
LYDIA: Then he explained why he was right. I found that took rather too long.
JANET: It does, rather. Has he done much scrapping and rewriting?
LYDIA: He’s always scrapping and rewriting bits. Except the bits I disagreed with. He always kept those.”

“LYDIA: Every great man has had a woman behind him.
JANET: And every great woman has had some man or other in front of her, tripping her up.”

“LYDIA: Is the next book going to be about a devoted woman who sacrificed her career for her lover?
JANET: No, darling; that was the one he wrote just before he met you.”

2 thoughts on “Dorothy L. Sayers: Love All (aka Cat’s Cradle)”