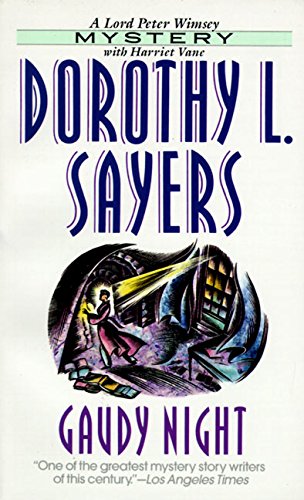 Rich, Rewarding, and Way Ahead of Her Time.

Harriet Vane is long past marrying age, independent (like Ms. Sayers herself, she is a mystery writer) … and on top of all that, she was the primary suspect in the murder of her own fiancé not too long ago. So can she possibly be a good choice as the person that her alma mater, Oxford’s [fictional] Shrewsbury College turns to in order to help solving crimes ranging from poison pen letters to acts of vandalism and assault? Not all of the college’s dons think so. In fact, even before being called on for this delicate task, upon returning to Oxford for the first time in years for a school reunion (“Gaudy Night”), Harriet’s presence in the college triggers thinly-veiled inquiries into the details of her encounter with the criminal justice system and, coincidentally with that experience, into her difficult friendship with Lord Peter Wimsey (much-acclaimed graduate of another Oxford college, diplomat, amateur sleuth and, for much of his career, one of literary history’s most dashing bachelors). Shrewsbury’s teachers and students, past and present, heatedly discuss issues ranging from a woman’s choice between profession and family, and the respective values of independence and loyalty, to the meaning of truth and accuracy in a scholar’s work ethics. Those who were never in favor of the college’s decision to ask Harriet to help unraveling the secret behind the progressively evil deeds plaguing Shrewsbury are, predictably, even more scandalized when she ultimately brings in Lord Peter Wimsey; who after all, as everybody has long since concluded, is vying for her hand in marriage. Ultimately, however, the dons find themselves almost uniformly grateful to Harriet and Lord Peter: The perpetrator’s identity is revealed, and the sleuthing pair has managed to keep the affair out of the headlines and out of the local police’s reach – which would have meant immeasurable damage to the college’s reputation, so crucial at a time when the presence of women on the sacred grounds of a traditional and highly acclaimed university was anything but a given.

This novel has it all: the best of Dorothy L. Sayers’s writing (rich characters, intimate knowledge of her subject and the setting of her story, suspense, humor and a thoroughly believable plot), a profound and engrossing discussion of moral issues way ahead of her time and, last but not least, one of the classiest and most unusual marriage proposals I know of, in fact or fiction. (“Placetne, magistra?”) Unlike many other mysteries it does not open with the crime to be solved; rather, Ms. Sayers leads the reader into the story through Harriet’s reflections upon returning to Oxford for her school’s reunion. This book, then, is not to be measured by the standards or the sensationalism of an action thriller – it follows the beat of a more measured drummer, although tensions are certainly running high throughout the story; emotionally, socially and otherwise. This is one of Dorothy L. Sayers’s best works, and not only a great mystery story but as truly rewarding and lasting a reading experience as any literature ever will be.

“Wherever you find a great man, you will find a great mother or a great wife standing behind him – or so they used to say. It would be interesting to know how many great women have had great fathers and husbands behind them.”

“The rule seemed to be that a great woman must either die unwed … or find a still greater man to marry her. … The great man, on the other hand, could marry where he liked, not being restricted to great women; indeed, it was often found sweet and commendable in him to choose a woman of no sort of greatness at all.”

“A marriage of two independent and equally irritable intelligences seems to me reckless to the point of insanity.”

“What’ll Geoffrey do when you pull off your First, my child?” demanded Miss Haydock.
“Well, Eve – it will be awkward if I do that. Poor lamb! I shall have to make him believe I only did it by looking fragile and pathetic at the viva.”

“I imagine you come across a number of people who are disconcerted by the difference between what you do feel and what they fancy you ought to feel. It is fatal to pay the smallest attention to them.”

“He was being about as protective as a can-opener.”

“The only ethical principle which has made science possible is that the truth shall be told all the time. If we do not penalize false statements made in error, we open up the way for false statements by intention. And a false statement of fact, made deliberately, is the most serious crime a scientist can commit.”

“You’d think (losing his job and degree for having made false claims as a researcher) would be a lesson to him,” said Miss Hillyard. “It didn’t pay, did it? Say he sacrificed his professional honour for the women and children we hear so much about – but in the end it left him worse of.”
But that,” said Peter, “was only because he committed the extra sin of being found out.”

“Some people’s blameless lives are to blame for a good deal.”

“A facility for quotation covers the absence of original thought.”

“He had the appeal of a very young dog of a very large breed – a kind of amiable absurdity.”