Festive Tasks, Door 4 – Decorating: Read a book that has an object that can be used as a Christmas decoration on the cover. 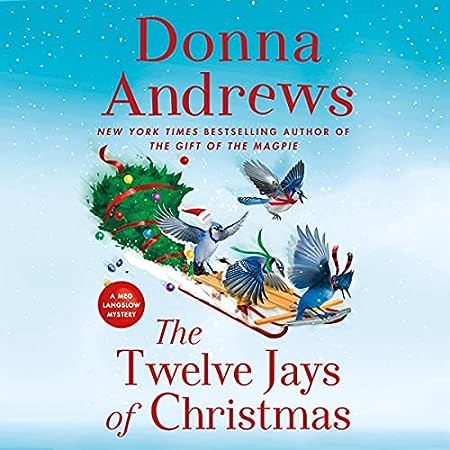 I started reading Donna Andrews’s Meg Langslow books a few years ago, with a Christmas book as it happened, and and this point returning to her fictional community of Caerphilly for the holidays has the equivalent effect of putting on comfortable old slippers and putting your feet up near the fireplace — and I wouldn’t want to miss it even a single year.

This year’s installment was no exception; even though the mystery itself wasn’t all that difficult to solve (I picked the right suspect immediately, wavered a little shortly after the investigation’s halfway point but then decided to stick to my guns after all); but this isn’t a series to which I turn merely, or even chiefly for its mystery contents, but for its big-hearted, loveable and yet perfectly realistic characters, its welcoming and truly inclusive fictional community — if there’s ever been a fictional place I would wish existed for real it’s this one (minus the murder rate, obviously) –, their holiday routines, like Michael’s (Meg’s husband’s) annual Christmas Carol one man show, the Caerphilly Christmas pageant (which has been known to feature everything from geese and turkeys to Diwali elephants), and last but definitely not least their annual variation of “deck the town,” “Christmas in Caerphilly.”

Meg’s immediate family is not much in evidence this time around (Michael and their sons are off on a skiing vacation), but Meg’s grandfather is still very much in evidence, which in and of itself guarantees plenty of mischief), plus there are the shenanigans involving her brother’s impending wedding (how to get out from under the happy couple’s mothers’ joint plans for a big bash?), the town regulars (Chief Burke, Mayor Shiffley, Ekaterina — the Russian-born manager of Caerphilly Inn –, and the officers of the local police force), a few of the town irregulars (Curly, the homeless protégé of Meg’s mother and the ladies of her benevolent circle) and last but not least a highly disagreeable painter hired to illustrate the most recent bird book by Meg’s grandfather, with his hapless assistant and two infuriated ex-wives in tow (the latter out for overdue alimony payments and other assorted grievances), as well as … two juvenile wombats, a flock of mockingbirds, and the eponymous twelve jays, all variously residents at Meg’s home, much to Meg’s understandable exasperation.  Add in a blizzard, the headaches created by a tell-all “investigative” website, and a few minor mischief makers, and it’s easy to see how even Meg has her hands more than full keeping the whole situation from blowing up in ten different directions — and it’s a joy to watch her doing it; even if you’d have to be mad to want to trade places with her for as much as a single second.

As the titular jays are not only pictured on the book’s cover but are also shown to be pulling an entire Christmas tree festively decked out, this is the perfect book for this year’s Festive Tasks, Door 4.