“In Pyramids, you’ll discover the tale of Teppic, a student at the Assassin’s Guild of Ankh-Morpok and prince of the tiny kingdom of Djelibeybi, thrust into the role of pharaoh after his father’s sudden death. It’s bad enough being new on the job, but Teppic hasn’t a clue as to what a pharaoh is supposed to do. First, there’s the monumental task of building a suitable resting place for Dad — a pyramid to end all pyramids. Then there are the myriad administrative duties, such as dealing with mad priests, sacred crocodiles, and marching mummies. And to top it all off, the adolescent pharaoh discovers deceit, betrayal—not to mention a headstrong handmaiden—at the heart of his realm.”

Going by that description (and also a bit of snooping elsewhere), the book will fit — at a minimum — the Supernatural, Creepy Crawlies, Deadlands, Monsters, Ghost Stories, and Grave or Graveyard bingo squares; possibly / probably also Spellbound, Demons, Relics and Curiosities, Cryptozoologist, and / or Doomsday … so, ample opportunity to kill two birds with one stone for those who want to combine both things.  Come and join us!

NB: For those who care about such things, the novel won the 1989 British Science Fiction Association award.

“When you die, the first thing you lose is your life. The next thing is your illusions.”
(Pyramids, p. 58.) 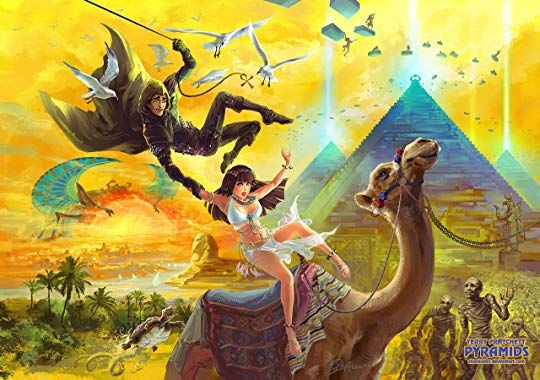