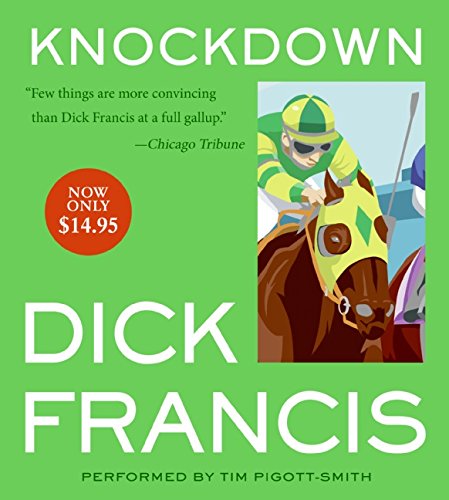 I love horses and used to be an enthusiastic horseback rider throughout my entire school years, and I also love mysteries, so Dick Francis’s books were a natural go-to choice for me once upon a time.  Having revisited a Dick Francis novel after many years, though, I find that this, too, hasn’t weathered the passage of time particularly well, even though it’s still a pleasure to go horse trading with Mr. Francis and have him share his experience of life on and off the racetrack — and Mr. Pigott-Smith is another audio narrator who has once more solidified his hold on my attention.

Knockdown is the story of Jonah Dereham, an ex-steeplechase jockey turned bloodstock agent who gets into trouble when he takes a stance against a de-facto syndicate exploiting a gap in the rules of trading for purposes of profiteering at their clients’ (the horse owners’ and breeders’) expense.  The book doesn’t start out as a murder mystery — there’s plenty of assault and battery, arson, and other assorted violent behaviour (as well as, obviously, greed, extortion and [near-]fraudulent machinations), but the murders — several of them in quick succession — only happen once the profiteering racket’s chief organizer is beginning to feel the hounds closing in on him, with Jonah at their forefront.