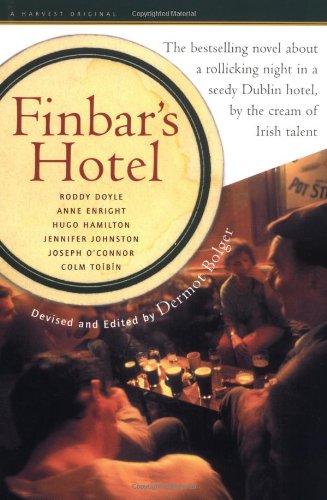 Longing for love and lost memories
in an old Dublin hotel.

It’s not exactly Dublin’s first address, the old Finbar’s Hotel on Victoria Quay, overlooking the River Liffey and opposite the palazzo structure of Heuston (erstwhile Kingsbridge) Railway Station – but it’s a place with both character and history: It has survived a fire, among its guests over the years have been some of society’s more colorful personalities, its back rooms used to be infamous for their use as a secret gathering place for everyone from politicians, gardai (policemen), members of the clergy and prostitutes, and it has that particular run-down and dubious charm of a place which has seen better days once upon a time. And now it is going to be torn down, to be replaced by a modern structure by the propety’s new owner. But before the staff leaves, before night manager Johnny Farrell, whose family has served the hotel’s owners since the place was opened in the 1920s by old Finbar and Johnny’s grandfather, James “the Count” Farrell, goes off to open a bead and breakfast in the suburbs with his wife, and before the hotel’s one true human institution, Simon the porter, checks into a hospital to nurse his cancer, a group of unusual guests assembles one last time, for one of the old hotel’s very last nights.

Ben Winters, the guest staying in Room 101, is arguably not the most colorful character – far from that, actually, he is a subdued, timid middle-aged gentleman who for one night has escaped the dull routine of his suburban middle class routine and is looking for a taste of city life, without even really knowing what to do with himself when he is not watching TV. (“Benny Does Dublin.”)

Rose and Ivy, the sisters who share Room 102, have come together to work out past difficulties that have been haunting them ever since Rose suddenly left their Galway family home many years earlier. (“White Lies.”)

Ken Brogan, the guest in Room 103, firmly believes that he can get every lady’s confidence if only he wants – unfortunately, he’s just had a very bad row with his girlfriend, and now he is out for revenge, and he thinks he has found the perfect object for that revenge in her cat Moggi. (“No Pets Please.”)

Night manager Johnny Farrell and Simon the porter have a final encounter with the last descendant of old Finbar, Alfie FitzSimons, a cheap lowlife who used to harass Johnny when they were children, and who has returned to stay in the hotel’s Room 104 for one last time; only to find that his hold over Johnny has finally worn off. (“The Night Manager.”)

Maureen Connolly has recently learned that she probably has no more than another year to live, and has since made it a habit to leave her family life behind whenever she has to a doctor’s appointment in the city (and sometimes, also when she doesn’t have an appointment). Freed from her daily bounds and from the bounds of accountability, she then assumes made-up identities on the spot and embarks on a new adventure whenever she takes off – this time, with American tour guide Ray Dempsey in Room 105 of Finbar’s Hotel. (“The Test.”)

May Brannock Americanized her name when leaving Dublin for the U.S., but after having moved around in the States and finally left her last boyfriend in Albuquerque, New Mexico, she has now returned to the place which her father, a firefighter, once helped to save from the flames – and while she is staying in the hotel’s Room 106, she is trying to rekindle the connection with her childhood friend Kevin. (“An Old Flame.”)

And last but not least, the art thief staying in Room 107 in anticipation of his meeting with two Dutchmen who have come to Dublin to buy his latest loot, grows restless and begins to stalk the hotel’s corridors and other guest rooms, thinking that he may have been followed by someone he doesn’t know and cannot trust. (“Portrait of a Lady.”)

“Finbar’s Hotel” is a collection of short stories written by seven Irish writers: Joseph O’Connor, Anne Enright, Colm Tóibín, Roddy Doyle, Jennifer Johnston, Hugo Hamilton and Dermot Bolger (who also served as the book’s editor); and while the stories are loosely connected by taking up each other’s motifs and personalities here and there, and all together tell the story of the old Finbar’s Hotel, its staff and its last guests, each story also stands on its own and presents its own world and cast of characters. The book thus provides great samples of the writing of some of Ireland’s preeminent authors; be warned, however, that the authors chose not to reveal who wrote which installment; so ultimately you’re left with the choice of either leaving the mystery of authorship unsolved, or relying on your prior knowledge of their style, or on what you have heard about them otherwise, to deduce the individual chapters’ authors. The project was successful enough to spark two successor volumes; “Ladies’ Night at Finbar’s Hotel,” which finds the hotel reopened in new splendor with a new set of unusual guests (written by seven of Ireland’s best-known female writers and also edited by Dermot Bolger) and “Yeats Is Dead!”, a hilarious spoof on the mystery genre, unlike the two “Finbar’s Hotel” volumes pretending to follow a continuous storyline (actually, it’s more like a very wild zigzag course) and reuniting some of the participants of this first “Finbar’s Hotel” collection with Frank McCourt and a number of other popular Irish writers. Given their diverse authorship, all three volumes necessarily share a somewhat uneven quality, and not every reader will like every chapter equally well – but overall this is a very enjoyable collection, and if you are unfamiliar with contemporary Irish literature, this is as good a starting point as any.