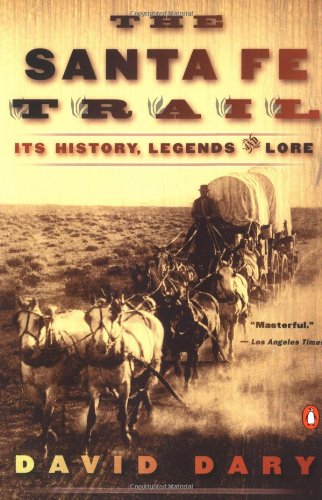 Names resounding with history, lore, enterprise, bravery and honor; conjuring up images of treks and trading posts, stagecoaches and scouts, gunfights and gold seekers, cowboys and cavallery regiments, blizzards and buffalo herds, Indians armed to their teeth, army forts, dust, mud, heat, and just about every other cliché in the book of Western storytelling. And, of course, the name that connects them one and all: that of the Santa Fe Trail, the 900 mile-long famous trade route linking Missouri and Kansas with the West until the advent of the railroad in 1880.

Already used by Indian traders long before the white man’s arrival, the trail was traveled by 16th century Spanish conquistadors Coronado and Oñate during their northward advance from Mexico, searching in vain for the famed golden cities of Cíbola. But regular trade relationships with the lands further to the east didn’t develop until 200 years later, when the French began to send commercial travelers towards what was then known as “New Spain.” This took a great deal of courage on the part of the envoys, not only because of the perils of a voyage into largely uncharted territory but also because the Spanish – seeing a threat to their territorial claims and their fiercely maintained trade monopoly in their territory’s northern provinces – often imprisoned French and American parties caught south of the Arkansas River, since 1819 the boundary between the United States and New Spain and, as of 1821, the newly-independent Mexico. But Santa Fe merchants welcomed and secretly promoted trade with the U.S., which they saw as a way to get out of the Spanish government’s stranglehold on the economy; and after 1821, the new Mexican government actively promoted trade with the U.S. American suppliers of whiskey, food, medicine, textiles and hardware soon gained profits up to 500 percent in the newly-opened market. After the Unites States’ substantial territorial gains resulting from the 1846 – 48 Mexican War, which also included New Mexico, the U.S. Army built a number of forts along the trail to secure it against increasingly fierce Native American raids, which however only stopped with the forced migration of the Indian nations to government-assigned reservations in the 1870s, shortly before the trail’s history itself came to an end with the arrival of a railroad locomotive in Santa Fe in early 1880. In 1987 – a little more than a century later – Congress designated the Santa Fe Trail a national historic trail.

Over the course of its history, the Santa Fe Trail saw some of the most prominent faces of the old West; from William Becknell, whose 1821 trip made the city of Franklin, MO, its first major eastern terminus, to Kit Carson, barely sixteen years old when he started working as a wagon train teamster in 1826, and Jedidiah Smith, who reportedly killed no less than thirteen Comanches before succumbing to their lances near Cimarron Spring in southwestern Kansas in 1831. Events such as the 1862 battle at Glorieta Pass, where Union troops crushed Confederate hopes of taking over New Mexico as a major Civil War prize, and the 1864 Kiowa raid of Fort Larned’s entire herd of 172 horses, further fueled the danger-shrouded, mythical status of the trail, its travelers, and the events surrounding both.

David Dary’s fascinating “Santa Fe Trail” condenses the trail’s history into a little over 300 pages, leaving ample room, however, for the dramatic stories, achievements and failures on which the fame of the “great western highway” is built. Despite its richness in detail, Dary’s prose is engaging and easily holds the reader’s attention (not surprising, given the subject matter). While it certainly helps to have at least a minimal understanding of the described events’ general historic context, the author’s narration makes up for any bits and pieces that may have slipped the reader’s recollection and also adds numerous lesser-known pieces of information, without neglecting to establish the relevant larger historic framework, such as the development of money trade in North America and the Lewis and Clark expedition, and their respective impact on the development of a trade route into Santa Fe. To a substantial extent, the book draws on primary sources: travel accounts and journals, trade invoices, contracts, newspaper articles, government documents, and more; many of them from Dary’s own library – the number of illustrations alone bearing the note “Author’s Collection” will be hard-pressed to find their equals elsewhere. (No small wonder: Dary reveals in the introduction that his interest in the trail’s history goes all the way back to his childhood.) While a few larger maps might have been desirable – those that are provided are somewhat difficult to read – this is no serious shortcoming; the author’s considerable descriptive gifts largely make up for the lack of easily decipherable cartographic devices, and the photographs, drawings, sketches, and paintings supplied throughout the book provide ample food for the reader’s imagination in fleshing out the stories’ narrative core and visualizing their protagonists. Although not reveling in the often bloody details of the trail’s history, Dary pulls no punches, neither in his own summary of the events nor in the selected quotes. For example, he concludes the history of the whites’ interactions with Indian tribes along the trail with an excerpt from Charles E. Campbell’s “Down among the Red Men” (1928), beginning with the unequivocal statement that “[t]he origin of nearly every war with Indians can be traced to some offense on the part of the white man.”

The book ends with a detailed glossary, annotations by chapter, as well as a fourteen-page bibliography: for the serious enthusiast, these alone should make its acquisition a virtual no-brainer. But even a first-time visitor to Santa Fe or any of the cities along the famous trail – heck, even an armchair traveler – will find plenty to marvel, agonize over and enjoy here.