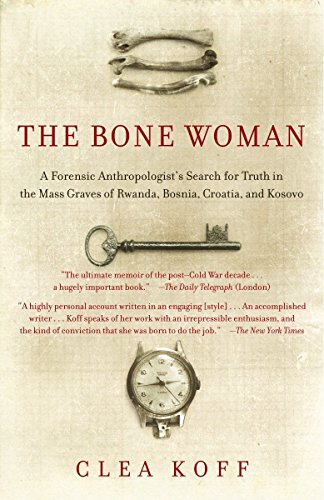 A buddy read with Elentarri and Ani.  As Elentarri says in her first reading status update, Clea Koff was a member of a team of forensic anthropologists who worked on several of major war crimes sites in Rwanda, Bosnia, Croatia and Kosovo, collecting evidence to be used in the trials before the International Criminal Tribunal for Rwanda (ICTR) and the International Criminal Trbunal for the Former Yugoslavia (ICTY).

Koff doesn’t provide a high degree of scientific detail as to the work of a forensic anthropologist, but enough — and just about the right amount — for a layperson to be able to imagine what that work involves (quite frankly, even based on what she does write, and what I know from other sources, more detail would probably substantially gross me out.  I manifestly do not share her love of “bones”, with or without body tissue attached).  But this, to me, quite frankly isn’t the chief attraction of her book to begin with.  Rather, what she does provide (and what I’d been hoping to get from her book) is a unique first-hand account of literally working “on the ground” of the site of a genocidal massacre: working conditions in general and in particular, nature of the work done, interactions with other U.N. / investigative and police organizations and forces, interactions with victims / survivors, their families and other witnesses (to the extent possible), and obviously the impact of the work on the anthropologist him-/ herself, even if, like Koff, they’re actually doing what they’ve wanted to do their entire life.

Clea Koff was a member of teams that helped gather forensic evidence for several of the really important ICTR and ICTY cases; including:

(Note: all above links go directly to the relevant ICTR and ICTY case files available online.)

As Koff states, the documentation of war crimes such as genocide by impartial forensic experts is crucial, both in order to preserve an accurate historic record and in order to help convict the perpetrators and make it impossible for them to deny — as they otherwise invariably would — that the crime of which they are accused occurred at all.  To the extent that it is possible to identify the victims, that identification may also help bring closure to their families and loved ones and, ultimately, help foster a return to a peaceful coexistence of the descendants of all sides to the conflict.

In the Kibuye trial — the first genocide case that Koff worked on, which covers the first almost 80 pages of her book — the availability of the forensic anthropological and pathological evidence collected by the team to which Koff belonged had the effect that the two accused (the governor of Kibuye province, Clément Kayishema, and a prominent local businessman) did not even dare dispute the events as such, nor their outcome: the brutal slaying of hundreds of Tutsi, many of them women and children, herded together inside Kibuye Catholic Church, by a mob chiefly consisting of Hutu ad armed predominantly with machetes (as well as the identical massacre of thousands of other Tutsi in other places within Kibuye province).

Despite the fact that the Rwanda genocide — including the Kibuye massacre — had received extensive global news coverage, the trial and the appellate chamber in the Kibuye case went to some lengths to first establish that the events (1) in Rwanda generally and (2) in Kibuye specifically (a) really had occurred as stated in the indictment and (b) legally qualified as genocide.  While the bulk of both judgments rests on witness statements establishing the two accuseds’ roles in the events, the trial chamber also extensively restates the forensic evidence given by the leader of Clea Koff’s team, Dr. William Haglund, as well as the team’s leading forensic pathologist, Nizam Peerwan.  Dr. Haglund also described the particular perfidy of the attackers, who would first hobble their already defenseless victims by cutting their Achilles tendons (thus preventing them from fleeing), to only then slaughter them outright:

“Expert witnesses Dr. Haglund, a Forensic Anthropologist, and Dr. Peerwani, a Pathologist, testified regarding the victims of the massacre. Both experts examined cadavers of thousands of people and described how they had been killed. Dr. Haglund testified that he had examined the large mass grave near the Catholic Church along with four additional areas that also contained human remains. Dr. Peerwani examined 122 cadavers during January and February 1996. Now part of the evidence, identification cards found on the victims indicated that they were all Tutsi.

Dr. Haglund’s written report confirms that many people, men, women and children were killed at the Complex. Of the 493 dead examined by Dr. Haglund, only found one gunshot injury. He estimated that 36% of people in the grave had died from force trauma whereas 33% of the people died from an undetermined cause. Dr. Haglund selected an individual as an example who he identified as a fifty year old man. The man’s fibula had been completely severed by some sharp object, which “would have severed the achilles” tendon rendering this individual partially crippled. On the neck region “all the soft tissue from the right side of the neck towards the back would have been cut through” and “a sharp cut mark in the tibia body, and in the inferior border of the scapular shoulder blade, another trauma caused by a blow of a sharp object.” Dr. Haglund concluded that the fifty-year old man was trying to protect himself by presenting different body aspects to the armed assailant. Dr. Peerwani found stab wounds indicating the use of sharp force instruments and confirmed that many of the victims were young children and the old.”