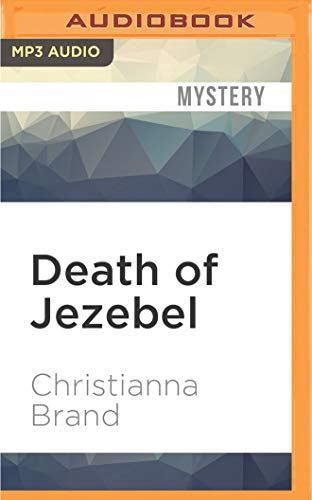 Print copies of Christianna Brand’s fourth Inspector Cockrill mystery, Death of Jezebel, are notoriously hard to come by even at collectors’ prices, never mind within the price range affordable to the average reader, and it baffles me why that should be the case — it’s easily one of the strongest entries in the series.  Luckily, in the absence of affordable print editions, at least there is an audio (MP3) version out there for a reasonable price, read by Derek Perkins, whom I rather like as an audiobook narrator.

Characterization was one of Brand’s strong points, and few mystery antagonists are as deserving of their fate as this book’s eponymous “Jezebel”: Even most exponents of Georgette Heyer’s usual collection of vinegar and acid can’t hold a candle to this woman; in fact, you have to go all the way to Penhallow to find the likes of her (or, say, Agatha Christie’s Mrs. Boynton or Simeon Lee … or on the saccharine end of things, Uncle Joseph from Heyer’s Envious Casca).  Unlike Mrs. Boynton and, especially, old Adam Penhallow, “Jezebel” meets her ordained end fairly early in the novel; not, however, before having casually ruined several lives on the book’s very first page (one literally, another one figuratively) and plenty of others to some extent or another in the time intervening between the mystery’s opening and her rather dramatic exit from the stage.

What ensues is an investigation characterized by another one of Brand’s great strengths: a fiendishly clever locked room / impossible crime scenario with enough sleights of hand, reversals and red herrings to give you a persistent case of whiplash.  “Jezebel” tumbles to her death on the stage of a pageant, which gives Brand a great opportunity to play with each and every sort of theatrical props, appurtenances, and scenery, from masks, costumes, stage doors and other features of stage design to the pageant’s two- and — yes — four-legged participants and the production’s other necessary personnel (director, producer, assistant, dresser, financier, etc.), all of whom of course have a bone to pick with the victim-to-be.  (Well, OK, the four-legged participants arguably don’t, other than being made to dance to her orders to begin with.)  And like in all of her books, Brand scrupulously plays fair with the reader: You may have the odd “oh, duh …!” and “headdesk” moment when you get to the solution, but there is very little background information added at the end that hadn’t at least been hinted at before, and none of it directly relates to the “who”, “why”, and “how” of the crimes committed.