Chimamanda Ngozi Adichie: Half of a Yellow Sun 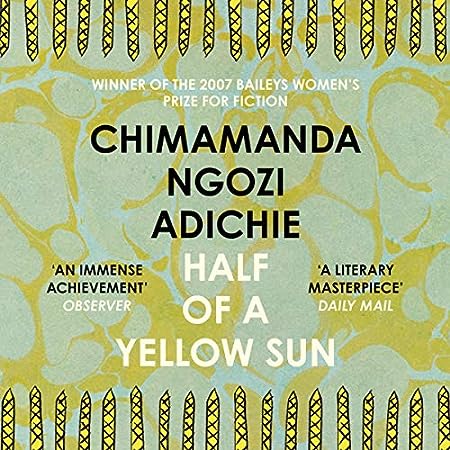 Biafra: The World Was Silent When We Died

Half of a Yellow Sun is named for the centerpiece of the Biafran flag:

* Red for the blood of those massacred in northern Nigeria after the country’s 1960 independence; in the time period leading up to the Nigeria-Biafra war, and in that war itself;
* Black for mourning them and in remembrance;
* Green for prosperity;
* And half of a yellow / golden sun for a glorious future: The sun has eleven rays, representing the eleven provinces of Biafra. 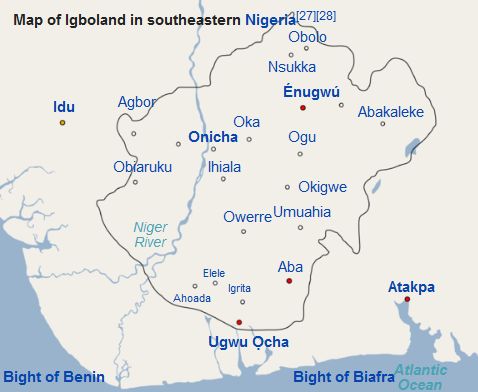 In this novel, Chimamanda Ngozi Adichie tells the inside story of the Nigeria-Biafra war, of the anti-Igbo massacres preceding it, and of the short-lived Republic of Biafra roughly corresponding with the area chiefly inhabited by the Igbo (as well as the Ibibio, and Ijaw) and, in colonial times, known as Eastern Region of Nigeria: to this day, the political period most haunting Nigeria and its people.

Though the novel is not autobiographical (Adichie was born several years after the war ended), it is inspired by the experience of Adichie’s parents, as well as numerous other eyewitnesses, who individually and collectively informed her protagonists: middle class twin sisters Olanna and Kainene, their lovers — university professor and political activist Odenigbo, and English journalist and would-be novelist Richard Churchill (a distant relative of Winston) –, and last but not least Odenigbo and Olanna’s houseboy Ugwu.  Through their eyes, and chiefly through those of Ugwu, Olanna and Richard, Adichie conveys a fragmented and multi-faceted image of the events, from the search for an authentic post-colonial (national? Igbo? pan-African?) identity to the shock and sheer terror of the anti-Igbo massacres — primarily in Northern Nigeria –, the euphoria accompanying the foundation of the Republic of Biafra, and finally the unspeakable horror of a war conducted, on the Nigerian side, by way of a systematic campaign of starvation, shutting off Biafra’s access to necessary food products and producing the images which have come to define the word “Biafra” once and for all to this day. 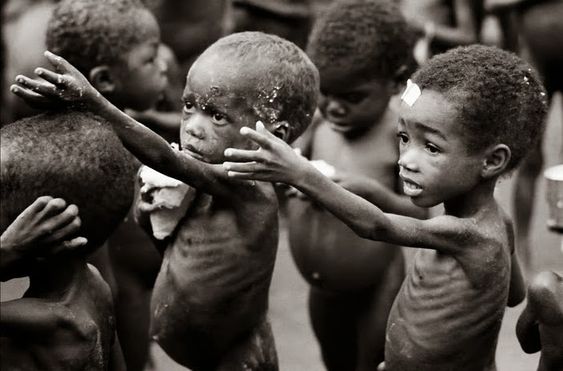 Although these images were front page news all over the world, and relief organizations such as the Red Cross and Doctors Without Borders (which in fact owes its very existence to the Nigeria-Biafra war) did the best they could to battle the impossible odds, most of the First World stood by and let events take their course, out of a mixture of political self-interest, ignorance, sheer disbelief, and helpless apathy in the face of the enormity of the genocide.

In the novel, it is initially Richard, who has come to identify with the Igbo at least as much, or even more than with his English roots, who tries to convey a sense of what is happening inside Biafra to the outside world, through newspaper articles published in England and North America.  But his big project, a book about the Igbo (initially about their history and art; later on, about the war), keeps getting thwarted, and he ultimately abandons it:

“Ugwu fumbled, awkwardly, for something to say. ‘Are you still writing your book, sah?’
‘No.’
‘”The World Was Silent When We Died”.  It is a good title.’
‘Yes, it is.  It came from something Colonel Madu said once.’
Richard paused.  ‘The war isn’t my story to tell, really.’
Ugwu nodded.  He had never thought that it was.”

And in fact, it will end up being Ugwu himself who writes that very book.  As it should be — the story of Biafra, and the Nigeria-Biafra war, is for the Igbo and the Nigerians themselves to tell, first and foremost.  That obviously doesn’t mean the rest of the world should ever stand by and keep silent in the face of war and genocide; but Adichie’s point here (and I agree with her) is about authenticity, both cultural and emotional:

“I taught an introductory creative writing class at Princeton last year and, in addition to the classic ‘show don’t tell’, I often told my students that their fiction needed to have ’emotional truth’ […]: a quality different from honesty and more resilient than fact, a quality that existed not in the kind of fiction that explains but in the kind of fiction that shows.  All the novels I love, the ones I remember, the ones I re-read, have this empathetic human quality.  And because I write the kind of fiction I like to read, when I started Half of a Yellow Sun […], I hoped that emotional truth would be its major recognizable trait. […]

Successful fiction does not need to be validated by ‘real life’; I cringe whenever a writer is asked how much of a novel is ‘real’.  Yet, […] to write realistic fiction about war, especially one central to the history of one’s own country, is to be constantly aware of a responsibility to something larger than art.  While writing Half of a Yellow Sun, I enjoyed playing with minor things [such as inventing a train station in a town that has none].  Yet I did not play with the central events of that time.  I could not let a character be changed by anything that had not actually happened.  If fiction is indeed the soul of history, then I was equally committed to the fiction and the history, equally keen to be true to the spirit of the time as well as to artistic vision of it.

The writing itself was a bruising experience. […] But there were also moments of extravagant joy when I recognized, in a character or moment or scene, that quality of emotional truth.”

(Chimamanda Ngozie Adichie, In the Shadow of Biafra — essay included in the 2007 Harper Perennial edition of Half of a Yellow Sun).

Half of a Yellow Sun has been called everything from “stunning” and “a landmark novel” to “heartbreaking”, “exquisitely written, “a literary masterpiece” and “a classic” (the last four of these, in one and the same sentence of a Daily Mail review blurbed on the front cover of my edition).  The novel is probably all of these things, and yet, let’s face it, all of these terms are nothing so much as well-worn reviewer’s clichés.  Since they’re the coinage by which professional reviewers the world over operate, I’m sure Ms. Adichie still preferred getting plenty of this sort of accolades over being ripped apart by these same professional reviewers’ mercilessly acidic tongues, which the same time-honored traditions of the trade reserve for books not considered worth the respective reviewer’s precious time. — Being a mere amateur, I’m going to content myself with saying that this novel is precisely what Ms. Adichie hoped it would be: an emotionally brutally honest book; a fragment of Nigerian history told through the eyes of a small, diverse, and devastatingly flawed group of people.

(And of course I’m going to count this towards the letter “A” of the Women Writers Bingo … never mind that I’ve already read another book qualifying for that particular square.) 4 thoughts on “Chimamanda Ngozi Adichie: Half of a Yellow Sun”