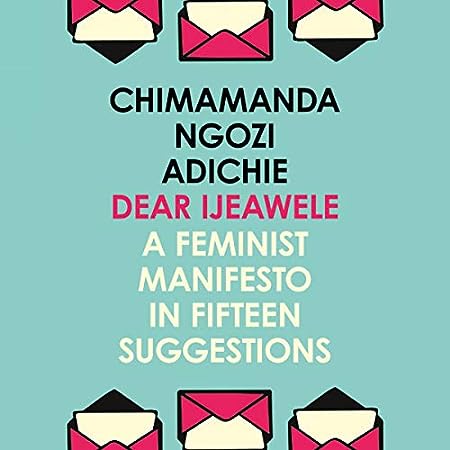 Chimamanda Ngozi Adichie’s Half of a Yellow Sun completely bowled me over when I read it a few years ago.  Purple Hibiscus, too, took me in, though never as absolutely, when I read it the following year; for a first novel, it’s very impressive indeed.  I seem to be doing somewhat less well with Adichie’s nonfiction, however, even though I do not substantially disagree with any of her statements in this book (Dear Ijeawele) or in We Should All Be Feminists, which I read last year.

In Half of a Yellow Sun (and, to a slightly lesser degree, also in Purple Hibiscus), Adichie grabbed me on a fundamental gut level: it didn’t matter one iota that both books are firmly grounded in her native Igbo culture (of which I know next to nothing and, in fact, less than nothing from personal experience).  Ultimately, both books are about our common humanity; there may be an additional level of personal identification for her (and for any fellow Igbo reader of hers), but that’s an added element, it doesn’t change the books’ essential nature.  No human being, regardless who they are and where they live, should have to face war, torture and starvation.  No woman should have to suffer abuse, whether at the hands of her husband, father, or at the hands of any other man.  This is the message of the two novels, and it comes through loud and clear and without any limitation whatsoever, be it implied or explicit.

And that, in a nutshell, is the difference, for me, between the two novels and Adichie’s nonfiction writing.  Now, obviously it is in the very nature of an essay that it contains express analysis; but if that essay is to make as broad as statement as Adichie’s two novels (and both Dear Ijeawele and We Should All Be Feminists intend to make an equally broad statement: No woman should suffer — or be made to suffer — discrimination of any form or in any context whatsoever), the argument underpinning it must be of equally broad and instinctively universal appeal as the statement itself.  And it is here that the slight disconnect comes in, at least for me.

Obviously, with regard to the statement as such — women’s right to equal treatment is as much a human right as the right to life and to freedom from harm –, Adichie is preaching to the converted as far as I am concerned, so as far as that statement itself goes, check, consider us fully aligned, gut level and all.  I also agree with her “suggestions” (or sub-theses), set forth in an attempt to show how independent female thinking and self-esteem can be boosted from early on.

That said, there are essentially two ways in which Adichie’s essays nevertheless don’t work perfectly for me: First, she adduces a plethora of examples of discrimination specifically tied to Nigerian culture.  To a certain extent, this is understandable: it’s what is closest to her, and Dear Ijeawele, moreover, has its roots in a request by a Nigerian friend — and more generally speaking, no argument will of course ever be entirely convincing without being buttressed by examples of its practical application.  But while the Biafra war in Half of a Yellow Sun is, for all intents and purposes, a stand-in for any and all wars, regardless where and why they are fought (and who of us can really, absolutely, 100% be sure they will not ever have to confront war in their own lives?), some of the examples mentioned by Adichie in this essay and in We Should All Be Feminists reflect specific situations that are extremely unlikely to ever come up in my personal experience.  So my response is only in part “gut level” and instinctive, namely to the extent that I am a woman, but it is not a spontaneous response along the lines of “I know exactly what she is talking about” — rather, my imagination has to kick in for me to say “what a terrible situation; this should absolutely not be happening;” and this creates an added element of distance.  Perhaps not a big one, but it is there, and at least in the first instance, it (wrongly) makes Adichie’s essays come across as less relevant to me personally.

Secondly, a number of the theses and arguments that Adichie raises here have, in fact, been part of the feminist debate for at least the past 200+ years and were first formulated by writers such as Mary Wollstonecraft, Elizabeth Cady Stanton, Susan B. Anthony, Sojourner Truth, Virginia Woolf, and Dorothy L. Sayers (some even as far back as the Middle Ages and the Renaissance, by the likes of Christine de Pizan and Moderata Fonte).  Yet, Adichie packages them so as to sound as if she had just thought all of them out for herself.  Well, maybe she has (though I do believe her to be familiar with, at the very least, Wollstonecraft’s and Woolf’s writings, as well as those of the three above-mentioned 19th century American feminists) — and I suppose as long as you consider Dear Ijeawele just as a private, individual letter to a friend, it doesn’t even make much of a difference to what extent Adichie’s ideas are original and to what extent she just agrees with others who have said the same thing before.  And of course, all of this doesn’t change one iota about the fact that these arguments are right on their merits and substance.  But the moment you turn the private letter at the heart of this publication into a book released to a worldwide readership (just as is We Should All Be Feminists), at least those readers who are familiar with the broad outline of the history of the feminist debate and the writings of the above-named authors are bound to do a bit of a double take at the form in which Adichie presents her arguments.  In addition, putting Adichie’s line of reasoning into the wider context of the feminist debate also alters the general thrust of her argument: It’s no longer “look, this is the way things are, and it’s high time somebody finally did something about it” (as Adichie makes it sound) — instead, it becomes “this is the way things have been for centuries, and isn’t terrible how little has changed and that we still have to debate the same issues?”  And I don’t think Adichie’s arguments would have suffered from the added weight of history; rather, the notion that “it’s high time somebody finally did something about it” would have gained considerably in urgency.

Again, I have no major disagreements on substance with anything that Adichie writes here (or in We Should All Be Feminists) — but I think I will stick to her novels in the future; they seem to be working so much better for me.