Festive Tasks, Door 16 — Charity: Read “A Christmas Carol,” or read a book in which poverty or hardship are significant plot elements. 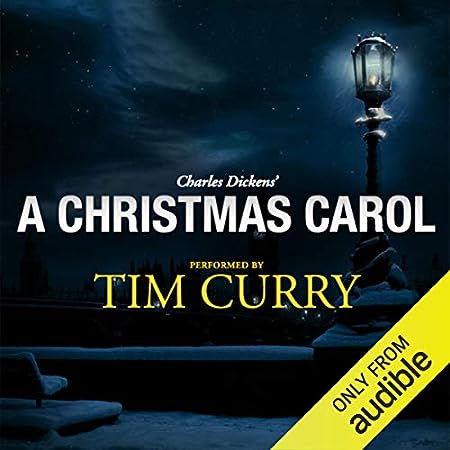 This is one of my annual Christmas rereads; one of the books I’ll never get tired of — in addition to listening to the audiobook version, I’m also going to watch the movie adaptation starring Patrick Stewart on Christmas Eve. (Talk about personal traditions …)

Somehow, Dickens’s condemnation of rampant greed and egotism rings true more than ever these days; instead of “Are there no prisons? Are there no work houses?”, Scrooge’s 21st century heirs respond to appeals for charity and humanity with “Are there no ICE camps and border patrols? Are there no sweatshops?” — except that unlike old Ebenezer, they don’t appear to be made to undergo a change of perspective by the collected Spirit(s) of Christmas. And at the height of hypocrisy, a good number of them are probably reading A Christmas Carol to their children as a jolly ol’ Victorian Christmas ghost story, complete with the generosity and abundance displayed by the Fezziwigs and Scrooge’s nephew Fred, and the happy ending of the reformed Scrooge knowing how to keep the spirit of Christmas better than anybody else for the rest of his life …

For years, both the audio and the movie version featuring Patrick Stewart were my go-to editions of this book, but in the past two years I’ve really also started to take to Tim Curry’s narration, which does a great job blending all elements of the story into a cohesive whole — Victorian atmosphere and sense of storytelling, admonitory (but never preachy) tone, the warmth and joy of a Christmas celebration the way it’s meant to be, the Cratchitt family’s desperate circumstances and, nevertheless, profound love of and happiness in each other, the abject misery of London’s slums; and last but not least a take on Scrooge that somehow manages to be unique (not a small feat, considering how many justly famous portrayals of the old miser there are already) and still, just as valid as true to Dickens’s writing as that of his countless predecessors.

ETA: And as coincidence would have it, Steve of A London Miscellany, my favorite blog when it comes to all things London history, just reposted his investigation into the precise setting of A Christmas Carol, originally undertaken this past January: Bah, Humbug! Steve concludes that Scrooge’s counting-house is located north of Cornhill, down an unprepossessing alleyway to a place called Newman’s Court, opposite St. Michael Cornhill church. To find out how precisely he ended up there, using both clues from Dickens’s text and from 19th century documentary material, check out his post … (and his blog while you’re at it, if you have the slightest bit of interest in London and its history).

First edition frontispiece and title page of A Christmas Carol (1843) 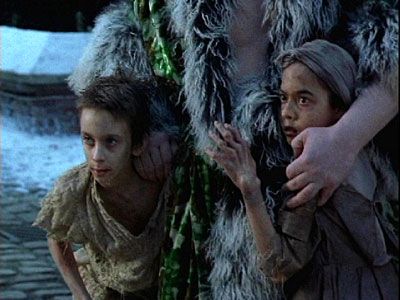 “Forgive me if I am not justified in what I ask,” said Scrooge, looking intently at the Spirit’s robe, “but I see something strange, and not belonging to yourself, protruding from your skirts. Is it a foot or a claw?”

“It might be a claw, for the flesh there is upon it,” was the Spirit’s sorrowful reply. “Look here.”

From the foldings of its robe, it brought two children; wretched, abject, frightful, hideous, miserable. They knelt down at its feet, and clung upon the outside of its garment.

They were a boy and girl. Yellow, meagre, ragged, scowling, wolfish; but prostrate, too, in their humility. Where graceful youth should have filled their features out, and touched them with its freshest tints, a stale and shrivelled hand, like that of age, had pinched, and twisted them, and pulled them into shreds. Where angels might have sat enthroned, devils lurked, and glared out menacing. No change, no degradation, no perversion of humanity, in any grade, through all the mysteries of wonderful creation, has monsters half so horrible and dread.

Scrooge started back, appalled. Having them shown to him in this way, he tried to say they were fine children, but the words choked themselves, rather than be parties to a lie of such enormous magnitude.

“Spirit! are they yours?” Scrooge could say no more.

“They are Man’s,” said the Spirit, looking down upon them. “And they cling to me, appealing from their fathers. This boy is Ignorance. This girl is Want. Beware them both, and all of their degree, but most of all beware this boy, for on his brow I see that written which is Doom, unless the writing be erased. Deny it!” cried the Spirit, stretching out its hand towards the city. “Slander those who tell it ye! Admit it for your factious purposes, and make it worse. And bide the end!”

“Have they no refuge or resource?” cried Scrooge.

“Are there no prisons?” said the Spirit, turning on him for the last time with his own words. “Are there no workhouses?” 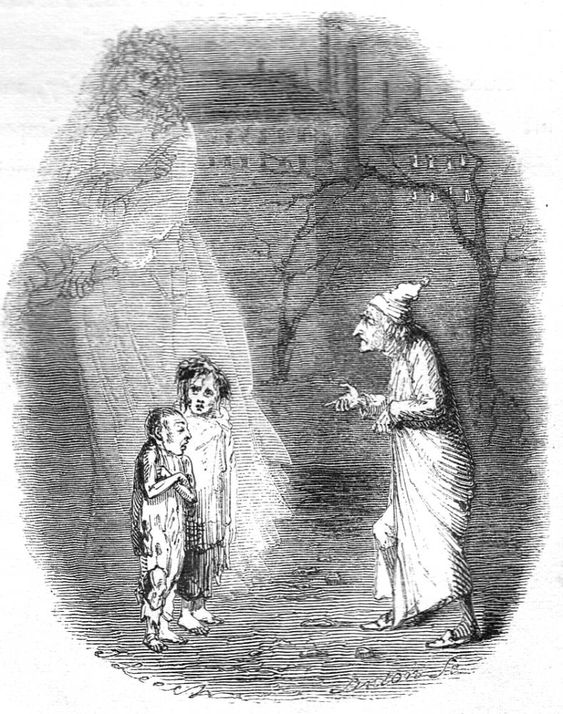 John Leech: Ignorance and Want
(steel engraving; illustration from the 1843 first edition of A Christmas Carol)