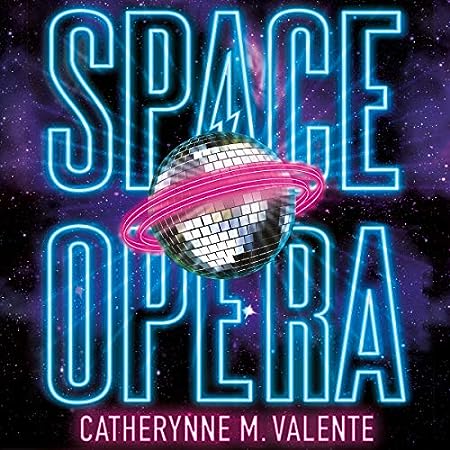 Catherynne M. Valente wrote Space Opera as a dare, after a publisher (Saga) had said it would accept a novel from her based on the Eurovision Song Contest sight unseen.  The novel had been sitting on my TBR pretty much ever since it was published, and what with May being both the month in which Valente is born and May 2021 also having seen the resumption of the Eurovision festivities after last year’s Corona-induced interruption, I decided I might as well include it in that month’s reading.  As it turns out, this was a timely choice not only because this year’s ESC winners (an Italian band with a Norwegian — or Danish — name, Måneskin, which means Moonlight) almost looked like a fallback to the days in which this book is set and could easily have shared a stage with Space Opera‘s heroes, the glamrock band Decibel Jones and the Absolute Zeroes — or rather, the band’s surviving members, Danesh Jalo aka Decibel Jones himself and the band’s all-purpose drummer, keyboardist and master of all other instruments, Oort St. Ultraviolet (and his cat, Capo) –; the book also features a vicious virus that turns everything it infests into foully mouldering zombies.

Valente starts us off with the Fermi Paradox and the Rare Earth Hypothesis, only to soundly reject the latter … well, she has to; she wouldn’t have a story otherwise — in fact, pretty much no science fiction writer ever, short of possibly Jules Verne, would have much of a story:

“Once upon a time on a small, watery, excitable planet called Earth, in a small, watery, excitable country called Italy, a soft-spoken, rather nice-looking gentleman by the name of Enrico Fermi was born into a family so overprotective that he felt compelled to invent the atomic bomb.  Somewhere in between discovering various heretofore cripplingly socially anxious particles and transuranic elements and digging through plutonium to find the treat at the bottom of the nuclear box, he found the time to consider what would come to be known as the Fermi Paradox.  If you’ve never heard this catchy little jingle before, here’s how it goes: given that there are billions of stars in the galaxy quite similar to our good old familiar standby sun, and that many of them are quite a bit further on in years than the big yellow lady, and the probability that some of these stars will have planets quite similar to our good old familiar knockabout Earth, and that such planets, if they can support life, have a high likelihood of getting around to it sooner or later, then someone out there should have sorted out interstellar travel by now, and therefore, even at the absurdly primitive crawl of early-1940s propulsion, the entire Milky Way could be colonized in only a few million years.

So where is everybody?

Many solutions have been proposed to sooth Mr. Fermi’s plaintive cry of transgalactic loneliness.  One of the most popular is the Rare Earth Hypothesis, which whispers kindly: There, there Enrico.  Organic life is so complex that even the simplest algae require a vast array of extremely specific and unforgiving conditions to form up into the most basic recipe for primordial soup.  It’s not all down to old stars and the rocks that love them.  You’ve gotta get yourself a magneto-sphere, a moon (but not too many), some gas giants to hold down the gravitational fort, a couple of Van Allen belts, a fat helping of meteors and glaciers and plate tectonics — and that’s without scraping up an atmosphere or nitrogenated soil or an ocean or three.  It’s highly unlikely that each and every one of the million billion events that led to life here could ever occur again anywhere else.  It’s all just happy coincidence, darling.  Call it fate, if you’re feeling romantic.  Call it luck.  Call it God.  Enjoy the coffee in Italy, the sausage in Chicago, and the day-old ham sandwiches at Los Alamos National Laboratory, because this is as good as high-end luxury multicellular living gets.

Life is beautiful and life is stupid.  This is, in fact, widely regarded as a universal rule not less inviolable than the Second Law of Thermodynamics, the Uncertainty Prinicple, and No Post on Sundays.  As long as you keep that in mind, and never give more weight to one than the other, the history of the galaxy is a simple tune with lyrics flashed on-screen and a helpful, friendly bouncing disco ball of all-annihilating flames to help you follow along.

This book is that disco ball.
Cue the music.  Cue the lights.“

Aaaand off we are into the intergalactic contest designed to bring everybody back together after the recent Sentience Wars and determine, at the same time, which life forms around the universe are “people” and which are “meat”; and which of them consequently are destined for destruction because, let’s face it, who needs them anyway? (that’s what the sentience wars were fought over), and which life forms possess just about enough sentience to be allowed to continue to inhabit their galaxy.  And if you thought humanity surely has to be “people”, you haven’t considered the opinion of the rest of the million billion life forms out there — nor the reason for this book’s existence.

So, guided by an Esca — a supersized lantern-fish-flamingo alien of indeterminate sex, infinite adaptability, and faintly reminiscent of Big Bird from Sesame Street, with multiple cross references to Roadrunner from Mr. Looney of the Tunes (as Danesh/Dezibel’s Nani would have said) –, the remaining members of the Absolute Zeroes are whizzed off via spaceship to a remote planet, there to represent Earth and all its inhabitants in the Metagalactic Grand Prix, with no song at the ready, no hope to actually win the contest, and only a feeble prayer to at least not finish last (which will mean destruction for their planet, because they will have shown that they alone, of all the life forms of the universe, do not possess a single shred of sentience).

And initially it’s all a lot of fun in a Hitchhiker’s Guide-meets-Startrek-meets-David-Bowie-meets-Looney Tunes-meets-Jack Vance-meets-every-space-travel-SciFi-classic-under-the-sun-meets … you guessed it, the ESC sort of way; except that it gets exhausting really, really fast, and one alien planet and its inhabitants begin to melt into the next in your brain (while making your brain melt in the process, too), particularly as most of these planets and life forms are presented by way of lengthy asides and you find yourself thinking more and more frequently (or I did, anyway), “can we please get back to the main story already?!”  In reviews from the year of the novel’s publication, expressions such as “chaotic reading” (Publishers Weekly, Feb. 18, 2018) and “over-the-top … frantic narrative” (The Guardian, Sept. 7, 2018) keep cropping up, and I agree with those assessments; except that conceivably I mean this slightly less enthusiastically than especially the reviewer in The Guardian seems to do.  While Valente’s bubbling imagination and prose left me speechless in every respect, ultimately I found that, once again, less would have been more here — at least for me.  Lordy, talk about “too many notes” …

So, douze points it’s decidedly not, but, on the other hand, also comfortably far enough ahead of the infamous nul points to still rank within the class of sentient beings and thus, in no danger of accidentally causing our small, watery, excitable planet’s destruction.

That being said, Valente has announced that she’s working on a sequel to this book (to be called Space Oddity and chronicling the adventures of the Starship Glam): and I’ll have to take some convincing to be along for the ride once more.  I can see the cult classic potential — for both books, of course –, but I think before I commit to a second dose, I’m going to wait for the reviews by a number of trusted friends, as well as a bunch of published reviews and other pieces of information allowing me to determine whether I’m in for a similar bout of linguistic and imaginative exuberance once again … and if so, whether I feel like diving in once more regardless.