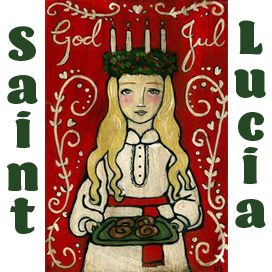 The historic (3d century AD) St. Lucia was Italian; yet, like those of many other saints (including, e.g., St. Andrew and St. Nicholas), the most important celebrations of her holiday don’t occur in her place of origin but somewhere else in the world.

List or create a stack of favorite books (minimum: three) featuring a character’s move or transition from one part of the world to another one (or from one end of a large country, e.g., U.S. Canada, Russia, China or Australia, to the other end.)

Alternatively, tell us: Which book that you acquired this year had to travel the farthest to get to you (regardless whether by plane, sea, or whichever other way, and regardless whether it was a purchase of your own or a gift from someone else)?

Most of my books of course come from sellers in Europe (chiefly Germany and the UK), but a fair few this year did also end up traveling here from North America, when all told the American offer was better than those by European sellers.

From Houston, TX:
Ellen Datlow & Terry Windling (eds.): A Wolf at the Door and Other Retold Fairy Tales
Sandra Uwiringiyimana: How Dare the Sun Rise

From McKeesport, PA:
Zen Cho: Sorcerer to the Crown

From Coral Springs, FL:
J.V. Turner: Below the Clock

Bought in 2019 and still on my TBR (don’t even comment, please):
From Seattle, WA:
James Thurber: Writings and Drawings (LoA)
Agatha Christie: Rule of Three

From Houston, TX:
Dorothy Dunnett: The Game of Kings