… or for the non-American TV-challenged: Fuckedyfuckedy … (you get the picture). 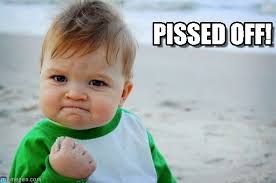 So it didn’t just turn out one more week, but 2 1/2 f*ucking solid weeks of me and a select few equally fortunate people being chained to conference room chairs and computers, with straight 15-18 hour work days practically the whole time and no time off even on the weekends, not to mention three almost-alnighters (as in: 2 hours of sleep); never mind that the rest of the country was enjoying a three-day holiday weekend at the beginning of this month (while for yours truly, one of the three almost-alnighters fell squat in the middle of said [nonexistant] three-day holiday weekend).

The good news is that Elvis the magnum opus we’ve been working on like crazy has finally left the station.  The bad news is that there’s another one looming in our immediate future, though hopefully not quite as involved as this just-completed one.

In the interim, I’ve doubtlessly missed a ton of BookLikes fun in general and Halloween Bingo fun in particular; not to mention the buddy read I’d particularly been looking forward to (The Hound of the Baskervilles).  Well, I’m going to try and come up with a sort of replacement buddy read post at least and see whether there are some aspects of the conversation that it still makes sense for me to join … though I have no doubt that it’s essentially done and dusted — the novel just isn’t long enough for that! 🙁

In other news, hurricane Matthew seems to have ravaged Haiti and a few other parts of the Caribbean while I was exiled on planet work, the mud-slinging contest that passes for this year’s American presidential elections seems to have spun yet another bit more out of control (“post-fact politics” anyone …? Lord, what a concept!), Germany evaded a Paris / Brussels style terrorist attack by the skin of our teeth, thanks to the courage of three Syrian refugees who recognized the terrorist, tied him up in their apartment and turned him over to the authorities (as a consequence of which brave act they and their families are now afraid for their own lives), and the world has lost yet another couple of major cultural and political icons (Dario Fo, Neville Mariner, and Simon Peres, to name just three).

But hey, what am I complaining about … BookLikes is still here!  So yey for that!!!