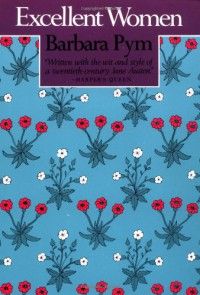 Themis-Athena, Murder By Death & I are planning a Buddy Read of Barbara Pym’s Excellent Women to tentatively begin on Friday, January 25.

Excellent Women is one of Barbara Pym’s richest and most amusing high comedies. Mildred Lathbury is a clergyman’s daughter and a mild-mannered spinster in 1950s England. She is one of those “excellent women,” the smart, supportive, repressed women who men take for granted. As Mildred gets embroiled in the lives of her new neighbors–anthropologist Helena Napier and her handsome, dashing husband, Rocky, and Julian Malory, the vicar next door–the novel presents a series of snapshots of human life as actually, and pluckily, lived in a vanishing world of manners and repressed desires.

Barbara Pym was born in 1913 and died of breast cancer in 1980 and Excellent Women was originally published in 1952.

“several strong themes link the works in the Pym canon, which are more notable for their style and characterisation than for their plots. A superficial reading gives the impression that they are sketches of village or suburban life, and comedies of manners, studying the social activities connected with the Anglican church (Anglo-Catholic parishes in particular.) (Pym attended several churches during her lifetime, including St Michael and All Angels, Barnes, where she served on the Parish Church Council.)

Pym closely examines many aspects of women’s and men’s relations, including unrequited feelings of women for men, based on her own experience. Pym was also one of the first popular novelists to write sympathetically about unambiguously gay characters (most notably in A Glass of Blessings).  She portrayed the layers of community and figures in the church seen through church functions. The dialogue is often deeply ironic. A tragic undercurrent runs through some of the later novels, especially Quartet in Autumn and The Sweet Dove Died.”

In 2013, The Telegraph published an interesting piece for Pym’s centenary, which can be found here.

If any of this sounds interesting, feel free to join us!