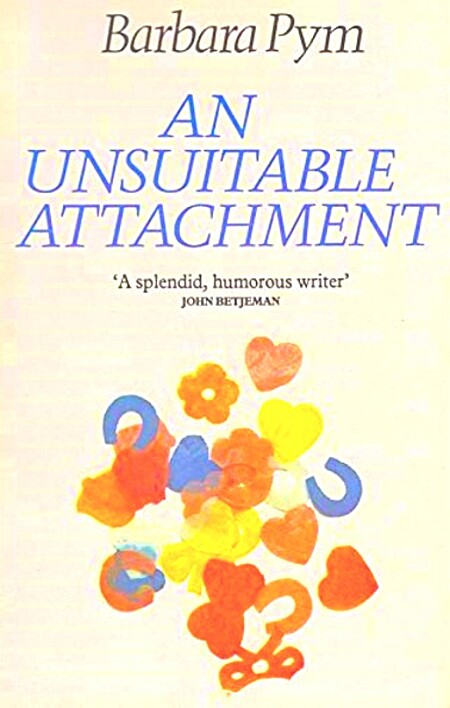 An Unsuitable Attachment was Barbara Pym’s seventh book — a number that should prove ominous, as this would turn out to be the book which publishers rejected on the grounds that it was (allegedly) “unpublishable”.  Various reasons for this were advanced; apparently Pym was told initially that it just wasn’t the kind of thing people wanted to read in the mid-1960s anymore, whereas her friend Philip Larkin was later given to understand that the book had been reviewed unfavorably by the two key pre-publication assessment “readers” within the publisher’s own editorial team (apparently Larkin was shown their reviews as well). — Neither of these reasons strikes me as convincing; neither when looking at this book in isolation nor when comparing it to the vast majority of the major publishers’ fiction output in recent years (including this very publisher’s, Jonathan Cape / Penguin Random House).  Publishing standards really have slipped abysmally in the past 50 years if this book was rejected on quality grounds in 1963 — and I wouldn’t even dream of insulting Ms. Pym by comparing her work to the likes of 50 Shades of Grey  (whose only justification for existence is its gigantic cash cow persona to begin with).

True, not every character here is as fully drawn as they might be; and this is true in particular for the gentleman who constitutes the eponymous “unsuitable attachment” himself, John Challow (Pym really did like painting pictures with her characters’ names, didn’t she?).  He remains little more than a cipher — enough to imagine just how he might have been considered “unsuitable” for his intended, Ianthe Broom, a “well-bred” librarian and clergyman’s daughter (and niece) with enough of an income and “nice things” — including a Pembroke table and some Hepplewhite chairs inherited from her parents — to secure a comfortable existence, five years his senior and far enough past her prime so as to raise an expectation that she will inevitably become, in the words of the local vicar’s wife, “one of those splendid spinsters … who are pillars of the Church and whom the Church certainly couldn’t do without.”  But while we do learn that Ianthe eventually does genuinely fall in love with him and decides to stand by her “attachment”; convention, suitability and expectations of her family, neighbours and parish be … binned (hooray for Ianthe), we never find enough what actually binds him to her strongly enough to propose marriage in the first place.

There is the predictable suggestion, of course, that he (a gentleman of no wealth, education or “proper” sense of style with nothing to recommend him other than a pleasing manner and his good looks — the words “tall, dark and handsome” spring to mind) is chiefly courting her because she provides just the sort of financial security and social position that has been lacking to date in his life, and which he may well only ever be able to attain by marrying a woman just like her.  But we also learn about him early on that he reads poetry, Lord Tennyson no less (a fact of which Patricia Wentworth’s paragon of propriety, Miss Maud Silver, would doublessly have approved with all her heart) — and we also learn in their first encounter that he finds Ianthe “rather pretty” (albeit “not very young”) and feels attracted (personally, not merely opportunistically) by her “air of good breeding”.  So, ever the optimist, I would like to believe he genuinely does care for Ianthe … but other than those early indications, we learn little enough about his feelings for her, which I think is a shame.

(And, as a side note: My, my, how social attitudes do change.  It’s been a long time since “film work” has last been looked up as something disrespectable, even by the self-declared “well-bred”.  O tempora, o mores …)

Other than this, however, I really fail to see what the publisher’s in-house reviewers found so horrible — horrible enough, in fact, to reject not only this book but to bring about an almost 15-year publication hiatus for Pym.  And if “a major character who remains a cipher” should have been one of the things that the publisher’s reviewers found lacking, I really don’t see why (other than as a result of being shamed into it by Larkin and The Times Literary Supplement) the publisher should finally have accepted Pym’s Quartet in Autumn — which contains at least one such major character as well (Norman, first and foremost) … and yet, ended up being a contender for the Booker Prize.

In fact, in one respect An Unsuitable Attachment is much closer to Quartet in Autumn than to an early novel like Excellent Women: While, like the latter, it does start out as a seemingly rather lighthearted satire of social mores and attitudes, Pym gradually abandons her merry distant hilltop perch as the novel progresses (and as the characters’ frustration with each other and with life in general mounts), until, like in Quartet in Autumn, the only distance left is one allowing her to observe her characters and their various (mostly self-inflicted) conumdrums from a perspective that still allows a certain amount of empathy but also disparate analysis and (at least implied) criticism.  And with that change of authorial perspective, the reader’s perspective changes, too (well, mine did at least) — towards the end of the book, I felt disenchanted with pretty much everybody except Ianthe and (mostly) Mark Ainger, the vicar; though I did warm somewhat towards Daisy for her completely unprepossessing acceptance of Ianthe’s and John’s engagement and her instant willingness to help them in the face of John’s potentially losing his job over his engagement to Ianthe, even if this does come straight on the heels of one of her trademark mixtures of trumpeted do-goodery mixed with snobbery and prejudice vis-à-vis total strangers:

“Whenever [Daisy] entered a café she always felt obliged to choose a table where a coloured man or woman was already sitting, so that they should not feel slighted in any way.  Looking around her, she saw a table for four with an African already at it.  Then she noticed that a clergyman, also bearing a tray, was making for the same table, but she managed to get there before him and put her bag down on the chair next to her to prevent him from sitting down.  One never knew — he might be a Roman Catholic or Oxford Group: it did not occur to her that he too might be trying to show the black man that there was no colour bar here.”

And of course, I very much agree with Sophia (the vicar’s wife)’s choice of Earl Grey as the tea appropriate to a conversation with another vicar about a difficult subject.  So well-bred and civilized, and such a contrast to the unsuitability under discussion! 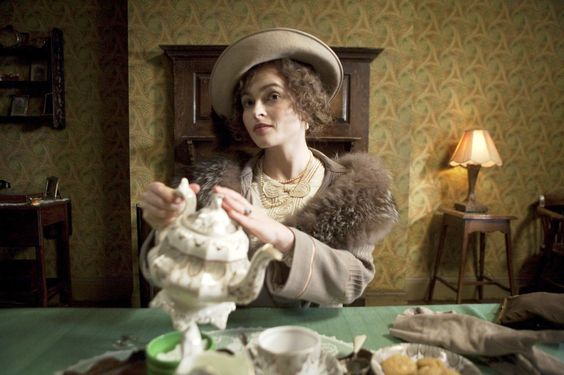 But ultimately, I am left with pouring the bulk of my affections where they have been right from the beginning, onto Faustina, the vicarage cat; and I’ll leave you with her final coup reported here — memo to fictional cat owners everywhere: you do not try to spoon-feed your feline a thoroughly disgusting substance; even less so, without even trying to mask its flavour (and if you do, you most certainly don’t use miniature anointing spoons):

“‘Take an apostle spoon,’ Edwin Pettigrew had said, in that calm way that inspired so much confidence, making it all sound so easy.  And certainly one would have thought that a vicarage was the one place where one could be sure of finding plenty of apostle spoons.  Trying to hold Faustina firmly under one arm, Sophia rummaged in the silver drawer but could not find one.  Then she remembered the coffee spoons that had been a wedding present and were kept in a satin-lined case.  Surely those were apostle spoons?  They looked something like them, but then she realized that they were miniature replicas of the coronation anointing spoon — not so unsuitable, really, for with a jerk of her head Faustina sent the spoonful of liquid paraffin running down her face and brindled front so that she had, in a sense, anointed herself with oil.

Sophia let out a cry of exasperation as the cat jumped to the ground and stalked away.  Who would ever have thought that a miniature anointing spoon could have contained so much, she asked herself, for her hands and the front of her skirt seemed to be covered with liquid paraffin.” 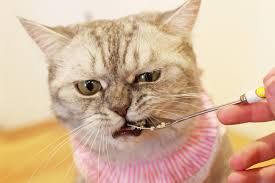