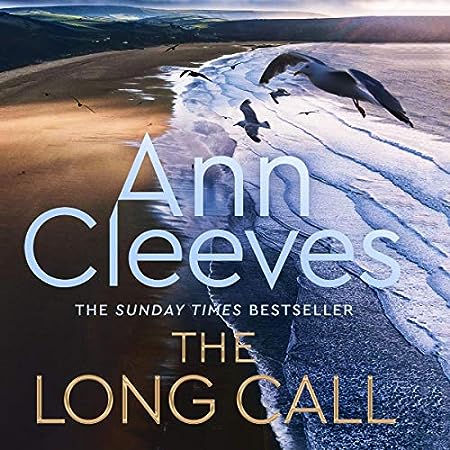 The first of Cleeves’s Two Rivers books, and while I loved the atmosphere and (generally) the writing as such, the solution was rather a letdown — basically this is yet another mystery harping on corrupt powerful stale pale males. Don’t get me wrong, the particular kind of corruption at stake here, as well as the victims involved (women born with Down Syndrome) would have me all up in arms if this book’s events had happened in real life. But in mystery writing, corrupt stale pale males are a trope as old as classic noir, which just seems to be rediscovered and dressed up in new garments every so often … and one thing I’ve loved about the other Cleeves books that I read so far was that there she tells great and hugely atmospheric stories without tapping into well-trodden trope territory. (Plus, she massively overdoes it here by piling essentially every single type of corruption into one single book: church — both CoE and fundamentalist sects –, business, charities and politics … I mean, can we have some subtlety here at least — wouldn’t one or, at most, two of them have done for purposes of this book, particularly given that the whole thing is essentially set in rural England far enough away even from Exeter not to be within that city’s jurisdiction, not to mention hundreds of miles from London, Bristol or Manchester — in a village community, in fact, so small that every inhabitant knows every single one of their neighbors?)

Also, what’s with the PC language all of a sudden, Ms. Cleeves — why do you have to dress up Down Syndrom as “a learning disability” over and over; are you afraid those born with it might somehow come across as lesser human beings if you always use the actual name of their birth defect instead of trying to make it sound more harmless and giving it a nicer-sounding name half the time? (And it is a genetic birth defect, let’s be clear about that. Let’s also be clear about the fact that the number and composition of a person’s genes has absolutely nothing whatsoever to do with their intrinsic human dignity.) And don’t give me “but I just wanted to explain it to people who don’t know what Down Syndrom is.” Because you don’t actually explain the disability as such, neither what causes it nor how precisely it manifests, other than as a learning disability, nor what special needs those born with it have (and how these needs can become less pressing if given the right kind of care). I mean, kudos for featuring people with this — or, heck, any type of disability — as important characters in a book to begin with, and for doing so with empathy and in a way that makes them come across as strong, self-determined and fully rounded people. I’d just have liked this particular aspect a whole lot better if it hadn’t had such an awfully pervasive subtext of PC writing.

Ditto the MC’s gay marriage. I mean, again, kudos for featuring this; I suppose after Val McDermid has done the same thing for lesbian partnerships of all kinds for the past several decades it was about time somebody finally created a mainstream mystery series featuring a (male) gay marriage (with an essentially mainstream and only slightly progressive married couple that just happens to be gay). But (1) do you really expect people in a village environment dominated by a fundamentalist Christian sect to be this unbothered (never mind that they’re more comfortable saying “partner” instead of “husband”) — i.e., vastly less hostile than the overall average of the population at large –, leaving aside the people belonging to the sect as such, virtually each and everyone of the gay couple’s neighbors, AS WELL AS virtually all of the members of the local police force, and (2) again, how many pieces of PC writing do you think you can cram into one single novel set in a remote spot of rural England before “many” becomes “too many” and stretches credibility? Sorry, that whole aspect strikes me as entirely too much filtered through rose-tinted glasses and hopelessly over-optimistic.

So, all the stars for the setting, the writing, and for going out of your way to include, let’s say, non-stereotypical characters. Deductions, however, for reveling in tropedom in the construction of the story’s solution and for trying to be altogether too PC and unrealistically optimistic on way too many issues at a time (and that, make no mistake about it, despite the awful things that happen to some very vulnerable people here).

I think for the time being I’ll return to Shetland; by and large, I like that series decidedly better than this new one. I’ll have to see about book two of Two Rivers when I’m done with Jimmy Perez — right now, I don’t think I could do Matthew Venn’s second outing justice; book 1 of the series has just pushed too many of my pet peeve buttons. Which, on the grounds of writing and atmosphere alone, is a huge pity; but there we are.