Amy Pershing: An Eggnog to Die For

Festive Tasks, Door 17 — Food & Drink: Read a book about food, or where the main character is a chef, gourmand, or bartender, brewer or distiller. 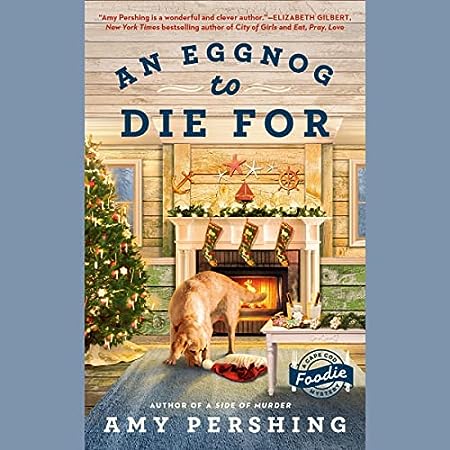 Sigh. I think it’s fair to say at this point that food-related cozy mysteries aren’t necessary my kind of thing, at least not if they also include a hefty dose of romantic suspense, with or without a capital “R” in “romantic”. I thought the splendid location might conceivably make a difference in this one, but alas, Cape Cod impinges less than I had hoped; and the writing is of the toenail-curling overly cutesy style that I also dislike in other “foodie” cozies (looking at you, Joanne Fluke, Laura Levine and Leslie Meier), with more “sure enough”s and “OK, be that way!”s than I want to see in a book for the rest of my natural life. (Also, come on — calling your dog “D-O-G” [pronounced “DeeOHjee”] (and to top it off, later in the book, a cat “C-A-T” [pronounced, of course “CeeAtee”]) … really??) And, last but not least, can we please have a cozy Christmas mystery already where it’s not Santa Claus who gets murdered?

Leaving aside the above-mentioned extra-cozy nonsense and the standard cozy mystery nonsense of reducing the police to mere bystanders of the amateur MC’s (and her “retired reporter” parents’) sleuthing antics, the mystery was actually fairly decent, with several halfway believable suspects who get debunked one after the other before we get to the real killer at last, so if all the above things don’t bother you, you might enjoy this book a good deal more than me.

Well, at least it let me fill in another book task for the Festive Tasks game, as the chief suspect is a bartender and (with his sister) co-owner of a restaurant — and, in addition, our intrepid amateur sleuth is a food critic (which I guess makes her a kind of professional gourmand(e)).