Agatha Christie: They Came to Baghdad 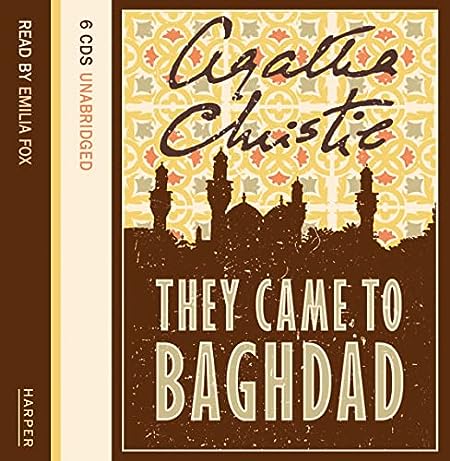 Well, that was unexpectedly entertaining.

If, like in The Secret Adversary (as well as some of the stories in Partners in Crime), Christie decides to poke fun at the genre, she can be gloriously amusing.  Indeed, a major reason why I love her early Tommy and Tuppence books and the two “Bundle” Brent books (The Secret of Chimneys and The Seven Dials Mystery) is their lighthearted tone; there is a youthful exuberance both to the characters and the author’s narrative tone that makes me very willing to overlook the books’ more outlandish elements, and which doesn’t seem present, at least not this controllingly, in many of her other books; least of all, her later spy thrillers.  I’m not the biggest fan of those; most of them — especially the books where she actually “means it” — range between somewhat unrealistic and completely over-the-top-and-out-there preposterous.

Even in her early books, Christie left little doubt that, like many of her contemporaries, she did in fact believe in political / world domination conspiracy theories — in fact, her belief translated in a profound mistrust of philantropical endeavours, which she saw as mere window dressing for the devil’s work, created for no other purpose than to rope in the gullible; and in later entries in the Tommy and Tuppence series (N or M?, Postern of Fate) and stand-alone thrillers (Destination Unknown, Passenger to Frankfurt), as well as in her one utterly preposterous Poirot novel, The Big Four, that belief comes crushing down on plot, characters and narrative tone alike and smothers them to bits.  So I didn’t particularly rush towards reading They Came to Baghdad, the one novel by Christie I had yet to read.

For once, I needn’t have worried.

While this isn’t quite the satire on the spy genre that I hoped it might turn out to be after having completed the first couple of chapters, Christie has her tongue planted firmly in her cheek for most of the book, and (hooray) the heroine, Victoria, is one of her independent young females who (hooray again) this time around isn’t even made to marry a wet dishcloth of a guy who’d be totally lost without her.  Given the  main location of this novel, with which Christie was intimately familiar (and it shows), and the fact that Christie herself was a possibly even more inveterate traveler than Victoria, it’s anybody’s guess how much of the author seeped into the book’s main character.

There were moments at about the halfway point of the book where the spy-in-chief lays out his (i.e., Christie’s) conspiracy theory for Victoria, and at that point I was seriously worried that we’d now be heading into both Destination Unknown and Passenger to Frankfurt territory after all; but happily, that was not the case.  What a fun group read this turned out to be … if only she’d written more spy books like this one, especially in her later years!