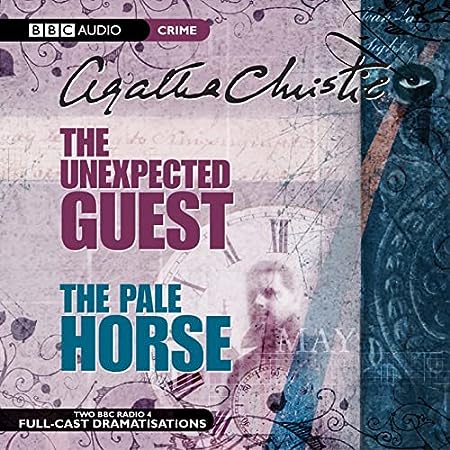 … for those of us looking for a quick Christie audio fix but who want to make sure they’re listening to Dame Agatha’s own words and not one of the novelizations of her plays by Charles Osborne: You can do just that!

The 1981 full cast BBC audio version of The Unexpected Guest (available individually on Audible, as well as sold in a CD set together with a dramatization of The Pale Horse) is based directly on Agatha Christie’s play.

I received my print edition of the play today, and since I already owned the CD set, I decided to engage in a little spontaneous experiment and listen to the CD while reading along in my new print copy.  Result: While the radio play is a somewhat condensed version, it definitely does contain Christie’s own words — verbatim (solely minus the abbreviation).  I could follow along on the printed page quite easily.

(Well, OK — admittedly I had bought the full cast audio version instead of the one of Hugh Fraser narrating Charles Osborne’s novelization because I had hoped the full cast version would be based on Christie’s own play, rather than (re-)dramatizing the novelization of a stage play … but of course I couldn’t be certain, so this was still a very satisfactory confirmation of my hopes and beliefs at the time when I bought the CD.)

Content-wise, this is rather a neat little mystery (non-series, as far as the protagonists are concerned); not quite as intricate as her novels, but very nicely done nevertheless, with the kinds of twists we’ve come to expect from our Agatha.  There are certain superficial similarities with several other books of hers, but the usual caveat applies … what constitutes the solution in one book may be merely a red herring in another one and vice versa.  Since I had already listened to the CD I knew the solution this time around (though I needed a slight prompt to remember it), so this repeat experience brought with it all the joys of watching Agatha at work in laying her traps for the unwary.

I’m still planning to read the full print version of the play at some point so as to get the full flavour of the things cut out for purposes of the BBC production, but for what I could see while glancing over the cut out parts, the abbreviation was an exercise in condensation, not in altering the contents (even though at least one potential red herring element has been eliminated … but that, too, is merely an extra tangent).

The print version doesn’t quite run to 100 pages, so I’m going to keep this in reserve for Snakes and Ladders, possibly to be used in conjunction with the radio plays MR and I are going to listen to tomorrow … as well as the odd short story or two to make up for the required 200 pages or equivalent audio listening time.

One thought on “Agatha Christie: The Unexpected Guest”