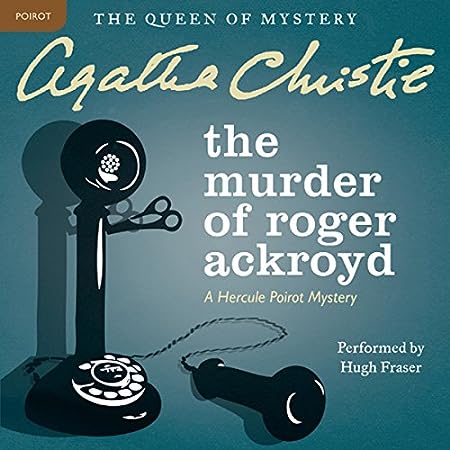 Well, talk about a book that you really cannot discuss without sticking spoiler warnings onto it right, left and center!  Christie was initially raked over the coals for its solution — and while her fellow mystery authors stoutly stood by her, it strikes me that it actually does break at least one of [Ronald] Knox’s Ten Commandments in the most major way imaginable — but people ended up imitating her in droves, so she can’t have been so totally wrong after all.  For me personally, this remains one of the absolute highlights of the Hercule Poirot series, and I am surprised, upon every reread anew, just how cleverly written it is.  I don’t want to preface yet another review by “spoilers, read on at your own peril”, so I’m just going to limit myself to the summary of the mystery’s setup that I wrote a minor eternity ago for my survey of the Poirot series starring David Suchet:

As the story’s title indicates, the case centers around Roger Ackroyd, an industrialist, the richest man in his home village of King’s Abbot and “more impossibly like a country squire than any country squire could really be,” as village doctor James Sheppard describes him in the novel.  When he is found murdered, Poirot finds himself compelled to step out of  a rather prematurely-chosen retirement, to investigate Ackroyd’s death … as well as its connection to that of Ackroyd’s friend, the only recently-widowed Mrs. Ferrars.

For as it happens, only a short while before his industrialist friend Ackroyd’s death, Poirot had removed himself to the country, where he had resolved to, henceforth, devote his life to the singular pursuit of growing the perfect vegetable marrow. And the detective’s chosen place of retirement is the very village that Roger Ackroyd had called his home, too: King’s Abbot, an archetypal English village like those that would later become so crucial to Christie’s Miss Marple mysteries, the first of which – Muder at the Vicarage – was published in 1930, four years after this particular novel; and Christie later said that both the setting of The Murder of Roger Ackroyd and the character of Dr. Sheppard’s spinsterish sister were elements she had enjoyed writing so much that she had instantly resolved to explore them in greater depth in a separate book.

6 thoughts on “Agatha Christie: The Murder of Roger Ackroyd”