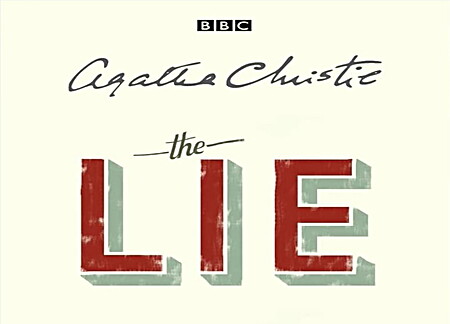 This play, even to longstanding fans of Agatha Christie, must necessarily come as at least as great a surprise as to writer and director Julius Green, who discovered it in 2018 (apparently, along with a number of other plays — though at least those listed HERE were in fact already known and available in print at the time) when researching Christie’s archives for his book, Curtain Up: Agatha Christie: A Life in the Theatre.  Still in 2018, Green directed a first stage reading of the play, and he later adapted it into a broadcast script for the BBC (currently available on YouTube … long may it last).

The Lie is not a mystery but Christie’s first foray into what would later become “Mary Westmacott territory” (novels / dramas centering on the complications of love and marriage), and it is believed to date from the mid-1920s, possibly written around the time she discovered her then-husband Archie’s infidelity.  As such, the play is believed to be at least partly autobiographical and, even if it is not, it’s still rather indicative of Christie’s own feelings about the topic at the time of its writing; strongly advocating, as it does, marital fidelity and balancing marriage against a woman’s desire (and right?) to seek her own path in life.  It’s not without problems; not so much in the writing as such but, especially, in the ending, which will hardly resonate with today’s listeners (at least not their female contingent), but Christie’s hand at creating distinct characters and complex problems is on fine display, and it certainly allows fascinating glimpses into her thoughts and attitude at the time of its creation.

2 thoughts on “Agatha Christie: The Lie”