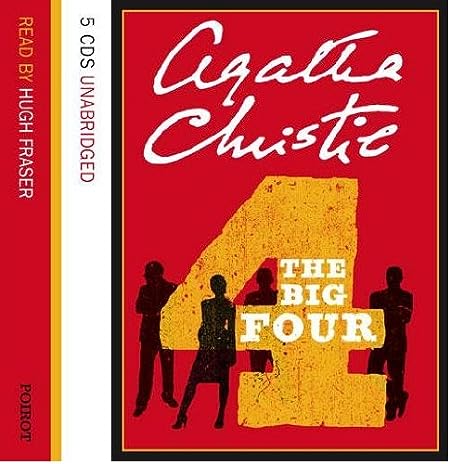 Ugh.  Well, let’s just say this one will never be one of my favorite Christies and I’m very glad we put this one behind ourselves in the Appointment with Agatha group read project — things can only get better from here on out, and fortunately, they do.  The Big Four is one of Agatha Christie’s monumentally big bad bloopers: disjointed, hyperbolically overblown and, at the same time, seriously underdeveloped in everything that matters, from plot to character development (what character development?) and beyond.  It is hard to believe that it comes straight on the heels of one of Christie’s most innovative novels, and consequently, one of her biggest and most enduring successes (The Murder of Roger Ackroyd); and I would very much like to believe that if Christie had been able to focus more exclusively on the / whatever book following Roger Ackroyd, she would have produced something infinitely superior.  Because in large part, The Big Four owes its existence and subpar, disjointed nature to a major upheaval in Christie’s life and her subsequent need to — for the first time ever — write for money: she’d recently learned that her husband had engaged in an affair serious enough for him to seek a permanent separation, had subsequently caused national headlines by disappearing from the face of the earth for 11 days (even Dorothy L. Sayers got in on the hunt for her vanished fellow writer), and was on the point of getting divorced.

In terms of “plot” (what plot there is), the book is based on several short story drafts which Christie found herself unable to finish and which, following a well-meaning but misplaced suggestion, she ended up cobbling together into a novel.  The end product is a piece of patchwork cloth with seams fraying all over the place that is really only held together by the chemistry and banter between Poirot and Hastings; a feature that Christie had thought she was abandoning when she married Hastings off at the end of Murder on the Links and sent him away to a ranch in “the Argentine”, but on which she thankfully fell back here.  Other than that, the overall theme is a “secret society / world domination” conspiracy theory centering on super-arch-villains of James Bond-antagonist proportions, unfortunately minus the tongue in cheek humor that makes similar (and only marginally less outrageous) plotlines work so incomparably much better in other early works, such as The Secret Adversary, The Seven Dials Mystery and mostly even (for me, anyway) The Secret of Chimneys; and a narrative that literally breaks every single rule in Ronald Knox’s Decalogue (or Ten  Commandments)*— the rules that, when founding the Detection Club only a short time later, Christie and her colleagues would come to adopt as part of the club’s statutes in a bid to ensure a consistently high standard of writing and weed out cheap sensationalism.

It would, fortunately, be a long time until Christie returned to major eyeroll-inducing, “oh God, woman, get over yourself” nonsense along similar lines as The Big Four, though when she did … oh well.  Let’s not go there.  Suffice it to say for the moment that those books don’t even have Poirot and Hastings as their saving grace.  So, two stars for the Little Grey Cells and their not just “slightly, but very slightly, below […] the average reader” mentally endowed sidekick; and it’s two stars really only because I can’t bring myself to rate anything featuring Poirot even less than that, and also because — in reverse application of the rating principle applying to ice skating competitions — I need to reserve the even lower star ratings for what I know is yet to come, to be able to appropriately single out those works’ dire awfulness in the context of the Christie canon as a whole. 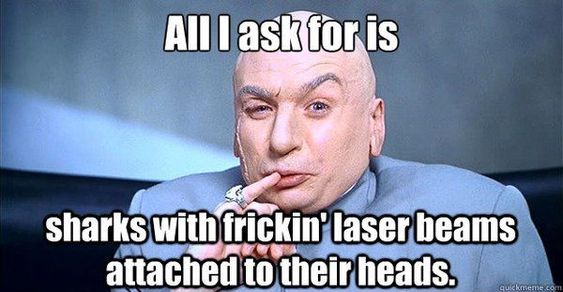 (I’m not the first member of the Appointment with Agatha group to include a Dr. Evil meme in her comments on The Big Four — this one is just too apposite not to use it.)

3. While not actually denying the existence of modern scientific methods of detection, the crime should as far as possible be solved by logic, ingenuity and sheer British pluck.

4. The police should tolerate, and preferably welcome, the assistance of an amateur detective, especially one who has never come across a murder before.

7. Identical twins may be introduced into the book, provided they are knowingly referred to as ‘the Knox brothers’.

8. Nobody shall be murdered in a town if they could have easily traveled to a small village to be murdered.

9. Any technology not available during the Golden Age (mobile phones, internet etc) must fail just when most needed.

10. Snowstorms shall, as a matter of course, last long enough for the amateur detective to investigate all aspects of the case before the police can arrive.