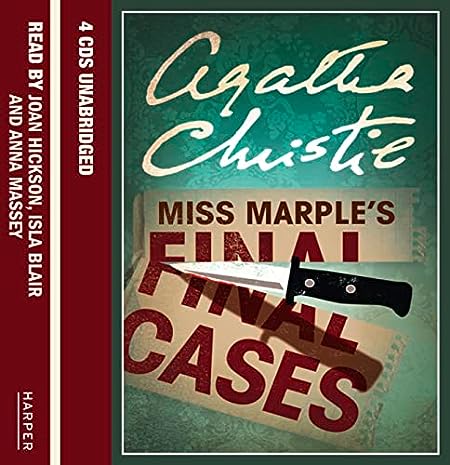 This posthumously-published compilation, first published in 1979, unites the last seven short stories revolving around St. Mary Mead’s elderly village sleuth. Though Miss Marple had actually – in addition to the novel A Murder at the Vicarage (1930) – even been introduced to readers in a canon of originally six and, after an expansion for republication in book form, later thirteen short stories, Christie‘s readers would soon come to cherish her mostly on the basis of the aforementioned twelve novels, each and every one of which is a gem of detective fiction in and of itself. As a short story character, however, after the initial Thirteen Problems, Miss Marple later only made rare intermittent appearances, whereas the majority of Christie‘s later short stories centered either around Hercule Poirot, or not around any of Christie‘s recurring characters at all.

In those stories that do, however, feature St. Mary Mead’s most famous (and beloved) resident, readers of course also meet a number of other acquaintances from her novel-length adventures; first and foremost her doting nephew – thriller novelist Raymond West – and retired Scotland Yard Commissioner Sir Henry Clithering, as well as village solicitor Petherick, and of course the Bantrys (who had moved center stage, much to their embarrassment, in A Body in the Library, 1942). Add to these Raymond’s flame, artist Joyce (later reincarnated as his wife Joan); as well as, in the later stories gathered in this collection, Miss Marple’s niece Diana “Bunch” Harmon, who is married to the vicar of Chipping Cleghorn, a village not unlike St. Mary Mead (see also A Murder Is Announced, 1950), St. Mary Mead’s Dr. Haydock, several maids called Gladys, and of course Inspectors Slack and Craddock and Colonel Melchett of Melchester C.I.D. and village Constable Palk, plus the usual cast of other unique characters, many of whom could just as well figure in one of the elderly lady’s “village parallels,” those seemingly unimportant events summing up her knowledge of life, and on which she unfailingly draws in unmasking even the cleverest killer.

Avid Christie readers will also recognize certain other character types, plot snippets, settings and other features here and there; for Dame Agatha was known to draw repeatedly on devices she found to have worked before, and she tended to use her short stories as mini-laboratories for elements later expanded on in novels. Caveat, lector, of premature conclusions, however, for Christie was equally known to throw in a little extra twist in such cases: what is a real clue in one instance may well be a red herring in another and vice versa, and one story’s innocent bystander may easily be the next story’s murderer.

From The Regatta Mystery and Other Stories (1939):

From Three Blind Mice and Other Stories (1950):

From The Adventure of the Christmas Pudding (1960):