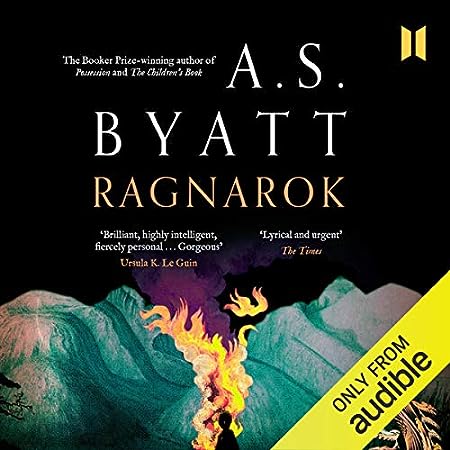 I decided to go with Byatt’s take on Ragnarök for the “Doomsday” Halloween Bingo square, because let’s face it, doomsday doesn’t get anymore terrifying than in Norse mythology — and I am glad that Byatt, for one, didn’t try to humanize the Norse deities, as so many other authors do in their attempt to make them understandable to modern readers.  (You can easily do that to the gods of Greek mythology — and honestly, that’s one of the reasons why as a child I found them, and Greek mythology as a whole, much easier to understand than Norse mythology; but try to assign human characteristics and motivations to Thor or Loki and you’re instantly missing their intrinsic nature.)  By the same token, I found it intriguing that Byatt herself — as the “thin child” through whose eyes we are witnessing Ragnarök here is, as she herself confirms in the book’s afterword, an only thinly-veiled edition of Byatt’s younger self — was drawn so much to the Norse version of doomsday in her younger years.  Of couse, what with WWII persistently threatening to destroy her own world, on the one hand it’s easily understandable that she would turn to the kind of storytelling that centers on precisely this sort of catastrophe; on the other hand, the thoroughly alien and hard-to-grasp Norse deities don’t seem to be the very first, logical point of identification coming to mind.  All the more thought, however, Byatt clearly put into her approach to Ragnarök, and all the more the whole thing is to the benefit of the reader … even if, like myself, that reader still comes away preferring Greek to Norse mythology.