24 Festive Tasks: Final Results — and Thanks to All Participants!

A big Thank You to everybody who joined the game and participated so actively: Collectively, we achieved the very respectable total score of

Go us — well done everybody!  Thank you so much from this year’s hosts: Murder by Death, Moonlight Snow (Reader), TeaStitchRead (Mrs. Claus’ Tea House), and me.  Once again, it’s been great fun watching the truly amazing things that everybody came up with to complete to the various tasks and the creativity that went into everybody’s posts.

And a special shout-out to Darth Pedant for stepping in and doing such an absolutely smashing job substituting for MbD as a host of the Melbourne Cup Day “pick your ponies” task!

Before moving on the stats of this year’s game, I wanted to share, at least once, the gorgeous 2019 festive calendar image “as such” — without being half hidden below all the calendar doors, open or closed. 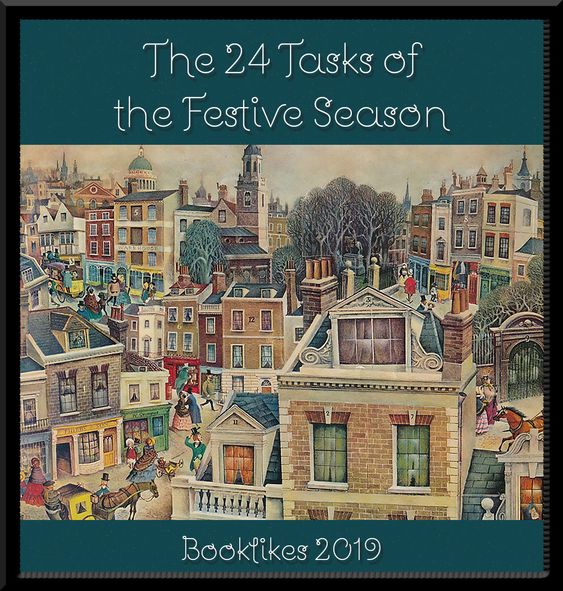 Thank you once more to MbD for finding it — as MbD told us, it’s an illustration for Charles Dickens’s Christmas Carol.

Thank you all, also, for playing along and reporting your completed tasks using the form that MbD created — even though RL interference didn’t let me get around to posting stats as frequently in 2019 as during the 2018 game, the form (and the Excel sheet it yielded) made tracking points just so much easier! 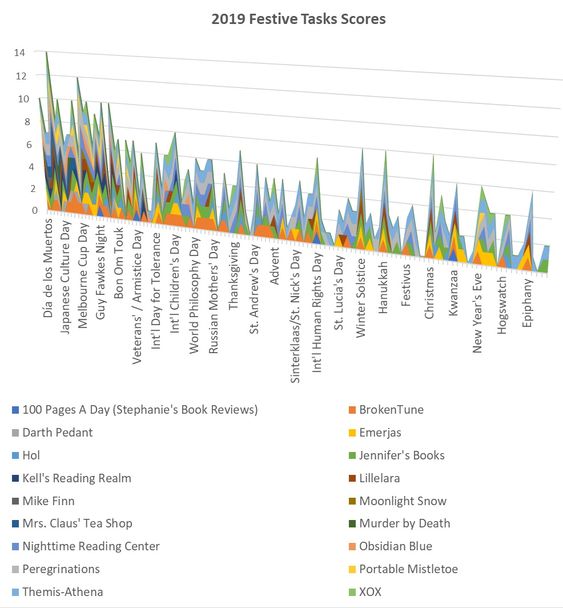 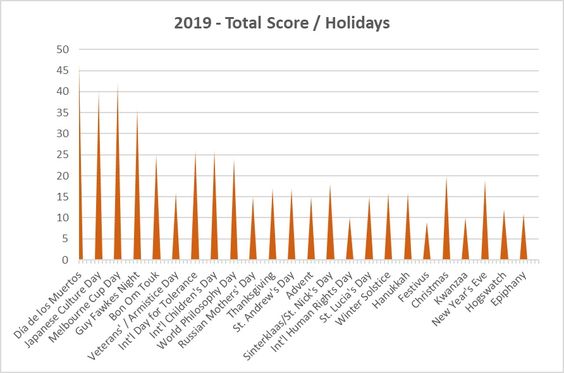 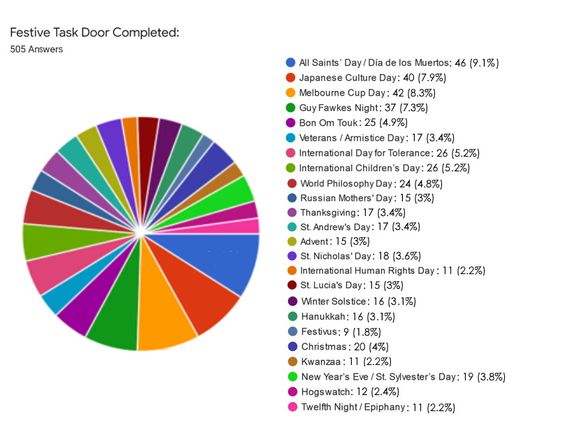 With almost 28%, overall the book tasks were the most popular tasks of the game, followed by Task 1, with Tasks 2 and 3 almost on equal footing and Task 4 bringing in the rear (though not by a terribly wide margin).  (Well, this is a book site … 🙂 ) 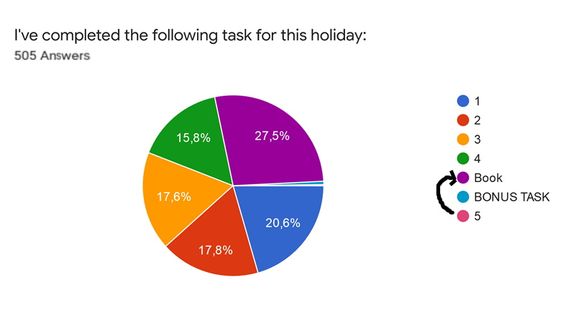 Almost 60% of all tasks completed were the second or further task completed for the square in question. 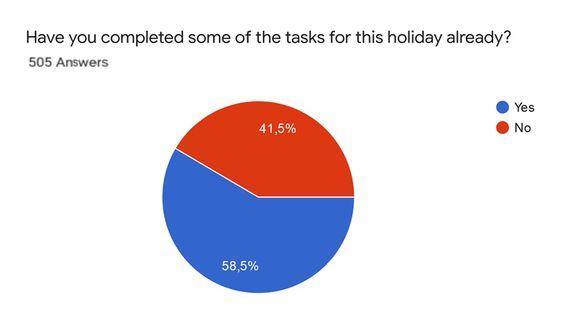 On a total of 8 squares, one or more participants completed all five tasks (book and other tasks):

Seeing one of our newly-introduced holidays (Japanese Culture Day) scoring so well makes me very happy — and hattip to our new co-host TeaStitchRead / Mrs. Claus’ Tea House, who whipped out all four tasks for this square in absolutely zero time as one of her first hosting contributions. 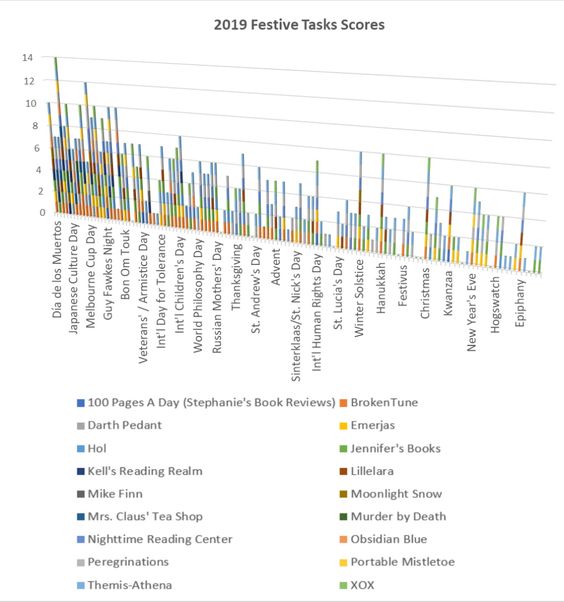 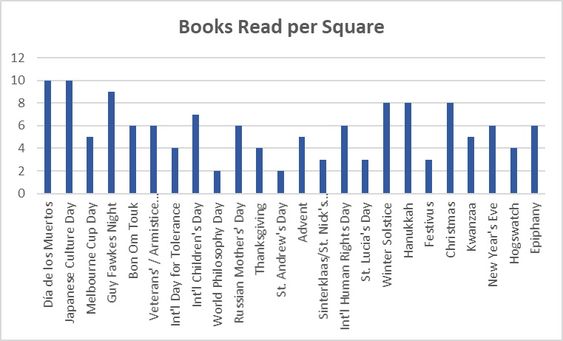 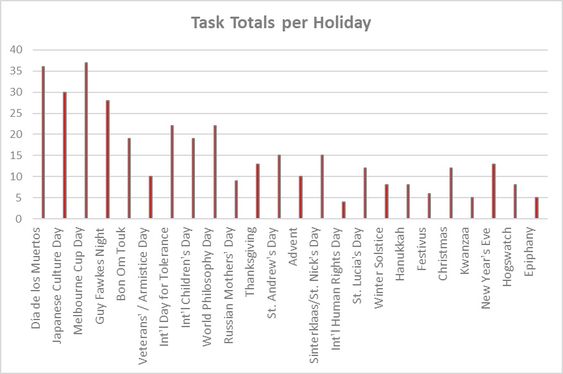 Least popular: Thanksgiving, Task 4 (postcard to a friend), International Human Rights Day, Task 4 (reconstitute a body of the UN), Hanukkah, Task 4 (food donation), Festivus, Tasks 3 and 4 (going “pole’mic on a book character, and “Festivus miracle” dialogue), Kwanzaa, Task 3 (corn dish), New Year’s Eve, Task 4 (holiday dinner with famous person as guest), and Epiphany, Task 2 (personal “epihany” experience) — all 0 points (sniff).  With one exception, these are all in the final weeks of the game … seems most of us just ran out of steam towards the end! 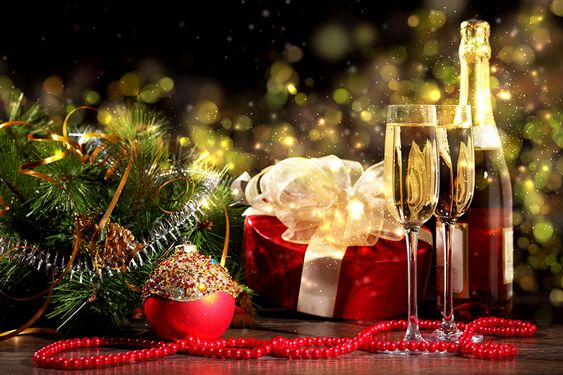