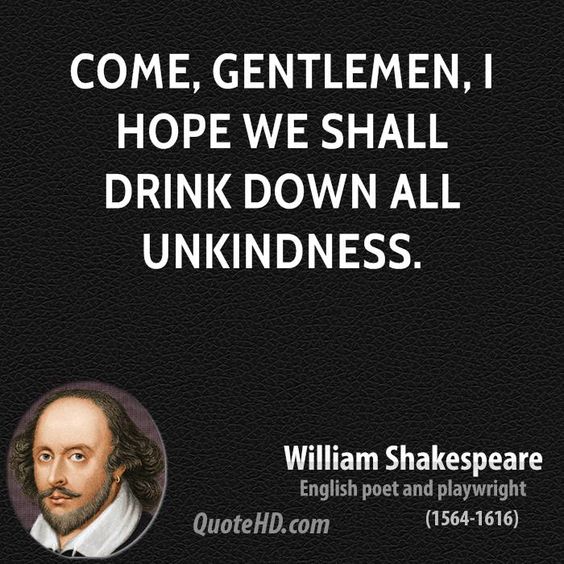 For when you skip the New Year’s Eve party to read and drink wine and then fall asleep at 10 p.m. because you don’t actually want to talk to anyone:

Good wine is a good familiar creature, if it be well used.
– Othello

For when your roommate’s lonely brother (or sister) comes to the party and follows you around talking about how much he (or she) loves The Big Bang Theory:

I pray you, do not fall in love with me,
For I am falser than vows made in wine.
Besides, I like you not.
– As You Like It

For when the party you’re invited to ends up being filled with dude-bros who don’t understand how you find time to read when there’s so much other fun stuff to do, like streaking and painting your face at sports functions:

Hell is empty
And all the devils are here.
– The Tempest

For when someone gives you their cab:

How far that little candle throws his beams! So shines a good deed in a weary world.
–The Merchant of Venice

For when someone steals your cab:

Thou art a base, proud, shallow, beggarly, three-suited, hundred-pound, filthy worsted-stocking knave; a lily-liver’d, action-taking, whoreson, glass-gazing, superserviceable, finical rogue; one-trunk-inheriting slave; one that wouldst be a bawd in way of good service, and art nothing but the composition of a knave, beggar, coward, pandar, and the son and heir of a mungril bitch.
– King Lear

For when you see Ryan Seacrest hosting the ball drop:

For when the party is just horrible and you have to leave right now and go home and put on your Snuggie:

Exit, pursued by a bear.
– The Winter’s Tale

For the morning after:

A glooming peace this morning with it brings;
The sun, for sorrow, will not show his head:
Go hence, to have more talk of these sad things;
Some shall be pardon’d, and some punished
– Romeo and Juliet

For when you get into a fight with your significant other right before the midnight kiss:

Thou and I are too wise to woo peaceably.
– Much Ado About Nothing

For when you want to feel better about not making any resolutions:

But ’tis a common proof
That lowliness is young ambition’s ladder,
Whereto the climber upward turns his face.
But when he once attains the upmost round,
He then unto the ladder turns his back,
Looks in the clouds, scorning the base degrees
By which he did ascend.
– Julius Caesar