Glingleglingleglingle – if you could wish any kind of god(dress) into existence, what would they be in charge of? Dusting? Weeding? We’re not aiming high here… tell us! 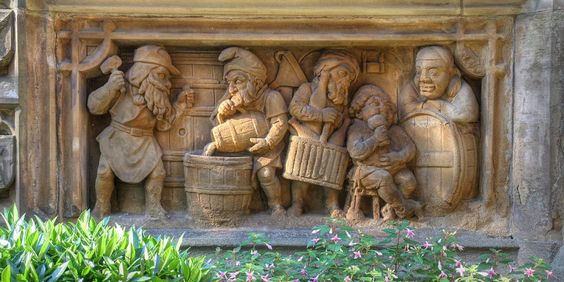 A Cologne legend dating all the way back to the Middle Ages has it that one upon a time, there was a race of busy little household gnomes called Heinzelmännchen who would come at night and secretly do all your work:  If there ever has been a supernatural being I’ve fervently wished into existence, it would be them … or, well, a god or a fairy doing the same thing.  Nothing to do with laziness, as suggested in the below poem, but except for cooking (which I enjoy doing for others, and occasionally also just for myself), I loathe housework and always have — in fact, when I encountered a variation of this particular “Festive Tasks” question as a topic for a school essay many decades ago (“What type of robot would you like to invent?”), even then my response was almost exactly the same.  I might even do my best to curb my curiosity and not spy on the li’l guys, which the Cologne legend has it was what ultimately drove them away …

Here is, courtesy of Wilipedia, the first stanza of the Heinzelmännchen poem that every kindergartener in the Rhineland knows by heart — or used to, anyway — and its English translation:

Once upon a time in Cologne,
how comfortable it was with the Heinzelmen!
For if you were lazy, … you just lay down
on your bench and took care of yourself.
Then at night, before one knew it, came
the little men and swarmed
and clattered and rattled
and plucked
and picked
and jumped and trotted
and cleaned and scoured –
and even before a lazy bum awoke,
all his daily work was … already done! …