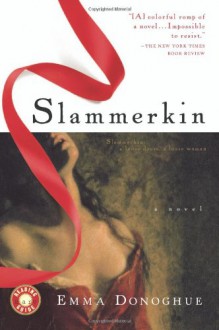 11 lost days, and a whole lost life to follow.

With 1751’s Calendar Reform Act, Britain adopted the Gregorian calendar implemented elsewhere in 1582; resulting in the elimination of 11 days between September 2 and 14, 1752. The edict, viewed as more than a mere alteration in the calculation of time, caused widespread riots; grounded as much in popular fear of a life shortened by 11 days (and the loss of 11 days’ earnings) as in Anglican contempt for anything “popish.” Emma Donoghue’s Slammerkin is anchored in these riots; for one of their participants is her young heroine’s father, whose conviction and prison-death eventually overshadows his daughter’s fate as well.

Four-year-old Mary and her mother Susan soon find themselves bound to a coalman Susan has married to secure a new roof over their heads. But they now lead a miserable life in a dark, colorless Charing Cross basement; leaving Mary with vague dreams of carriages, beautiful clothes and “bettering” herself; and a strange fascination with the harlots she sees on her way to school, one of whom wears a bright red ribbon in her silvery wig. Eventually the desire to own such a red ribbon, too, turns into an obsession with Mary, now 13; and realizing she will never be able to buy it with money, she tenders a kiss: instead purchasing herself rape, infection with the “clap” (GC) and pregnancy. More than abrupt, brutal loss of her childhood innocence, the incident propels her onto the street when her mother discovers her shame and bans her from her home. She is picked up by none other than the harlot she has so admired; 21-year-old Doll Higgins, who brusquely opens her eyes to the fact that, deflowered, pregnant and without an honest trade, Mary has now become one of them: a harlot, a “miss” (as they call themselves), a prostitute. She resists, though not for long – first for the money she needs to abort the unwanted baby, but ultimately also internalizing Doll’s reasoning. And Doll becomes her mentor in everything related to their trade, and in the only things that matter now: Every girl for herself, never give up your liberty, clothes make the woman, and clothes are the greatest lie ever told.

Yet, Mary is given the improbable chance to turn her life around. After a stay at Magdalen Hospital (founded with the aim of reforming “penitent” prostitutes), she returns to their abode to find Doll frozen to death in London’s brutal winter. To escape their hawkish landlady’s henchman she flees to Monmouth, the town near the Welsh border her parents originated from, finding shelter and a position as a maid with her mother’s old friend Jane Jones, a seamstress like Susan, but despite the same humble origins not working her fingers off for pennies but with a shop of her own, and married to an equally well-respected staymaker. Soon Mary is less maid than daughter and confidante to the couple, who despite many attempts to produce a son are only left with a six-year-old girl. Mary does learn an honest trade after all – the same as her mother’s, which she had fervently refused to take up before. She even finds a suitor in the Jones’s young manservant Daffy and strikes up a friendship of sorts with the other maid, a dark-skinned former slave; her only antagonist the family’s live-in nursemaid, a woman grown bitter and zealously religious after the loss of her own child and husband. But eventually, Mary’s old life catches up with her, and she secretly returns to her former trade – with disastrous consequences.

Slammerkin (an 18th century term for both a loose woman and a loose dress) is tentatively based on the real Mary Saunders’s story, executed in 1764 for killing her mistress; according to contemporaneous reports either to steal her savings or out of a longing for “fine clothes.” In chronicling Mary’s life, Emma Donoghue treads on familiar paths; from Fanny Hill (which actually dates from the time when Donoghue’s novel takes place) to Moll Flanders, Nana and The French Lieutenant’s Woman, literary history is replete with novels exploring the world’s oldest profession and the things driving women into it. But Donoghue is not trying to reinvent the wheel. In addition to taking stock of the trade as such, the various forms of servitude woman have endured historically (marriage, domestic service, slavery and prostitution) and the rigors of the British class system, what most drives this novel is a study what motivates our decisions: personality, upbringing, experience and social circumstances; and the question whether – when given the choice – we can escape what we have accepted as life’s inevitabilities, or whether predisposition and social conditioning will prevail in the end. With Mary Saunders, the latter is the case; and the same is true for both of her parents, so ill-equipped to guide her. Mr. and Mrs. Jones, on the other hand, have shaken their humble origins and handicaps (Mr. Jones lost one leg as a boy) and made the most of their gifts, while still accepting the class system’s boundaries. But by the time Mary comes into their household, she is too irretrievably jaded to recognize the chance given her.

Emma Donoghue’s prose is vividly colorful; laced with images that always feel right-on. Mary, while easy to like initially, becomes more and more complex as the story progresses (but whether you like her or not ultimately isn’t the point). The novel is sometimes criticized for portraying men as brutes, solely dominated by their basest instincts; it should be remembered, however, that this is the point of view of Mary who – patently unable to deal with the sincere, honest affections of an (if anything) rather too youthfully virtuous Daffy – has come to see every man as merely a potential “cully;” even Mr. Jones, who ironically could have been her real father had her mother reciprocated his attentions. Overall, this is an engaging, thoughtful read; nothing for the easily offended, but recommended to anyone interested in history and well-drawn characterizations.