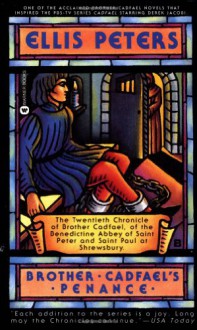 Witness if you will, reader, the Chronicles of one Brother Cadfael of the Benedictine abbey of St. Peter and St. Paul in Shrewsbury, Shropshire: witness the twenty adventures of this most unusual monk, herbalist and former crusader, occurring between the years of Our Lord 1138 and 1145, in the middle of the devastating civil war between Empress Maud and King Stephen for the English crown. Witness, reader, how this rare Benedictine’s “practically miraculous” powers of deduction (Booklist) helped him solve mysteries such as that of the unfortunate violent death of a Welsh lord who sought to prevent the relocation of the sacred bones of his village’s maiden saint to no other place but Shrewsbury’s very own Benedictine abbey (“A Morbid Taste for Bones,” the first Chronicle); the long-held secrets hidden under the rags worn by one of the unfortunate residents of Shrewsbury’s leper colony, and that ill-fated soul’s connection to a fair young bride come to Shrewsbury to be wedded at St. Peter and St. Paul, only to find her groom – himself a brute in a gentleman’s clothes – murdered only shortly after their arrival (“The Leper of St. Giles,” the fifth Chronicle); and a woman’s earthly remains, found in a field bequeathed to the abbey of Saint Peter and Saint Paul by a potter who, struggling between the callings of a husband and those of a servant of the Lord, had relinquished his marital vows in favor of those to the church (“The Potter’s Field,” the seventeenth Chronicle).

Pause however, reader, before proceeding to this twentieth and last Chronicle, if you are not familiar with all accounts of Brother Cadfael’s previous extraordinary ventures. Pause, I say, and seek out the Chronicle entitled “The Virgin in the Ice,” which is the sixth in order and takes place in the winter of the year 1139. For in that report you shall encounter not only certain persons important to the events you must expect to learn about in this last Chronicle, duly referred to as “Brother Cadfael’s Penance,” but you shall also learn about certain details about Brother Cadfael’s past, and the life he led among the defenders and the residents of the Holy Land in the year 1112. And while it is true that the essence of said facts, insofar as indispensable to the telling of this present and final Chronicle, will again be revealed to you as you progress through this present account, trust me if I tell you, reader, that your enjoyment and understanding of this final Chronicle will be greatly enhanced by having acquainted yourself with the full revelation of said facts, events and personae, as encountered in said prior Chronicle. At the very least, reader, accept my humble suggestion that you seek out the visual representation of said prior Chronicle, equally referred to as “The Virgin in the Ice,” which is part of the most excellent productions also entitled “The Chronicles of Brother Cadfael,” created in the past century’s last decade.

Thus prepared, proceed then to this last Chronicle, which takes place in the year 1145, when a conference was held in the great city of Coventry, presided over by none other than the mighty archbishops of Coventry, Winchester and Ely, to bring an end to England’s bitter civil war. And Brother Cadfael is in attendance; not, however, because he has been called upon to lend his services to the cause of diplomacy, which regrettably is a foregone conclusion between enemies as deeply opposed as Maud and Stephen, but to make inquiries about a certain young knight named Olivier de Bretagne. For said knight, of Syrian extraction and near and dear to Cadfael’s heart, has been captured in a struggle following his noble lord’s fiat to abandon their allegiance to the empress and join the king’s forces instead, and he is now held without any offer of ransom, which is unheard of in the customs of war. And while Cadfael sojourns in Coventry, a haughty nobleman, who has played a most dubitable role in the change of allegiance of the forces of his and Olivier’s liege, is found murdered; found by none other than Olivier’s brother-in-law, Yves Hugonin, himself barely out of a boy’s clothes and now a liensman of the empress, and readily declared the crime’s chief suspect. Thus facing the unfortunate concurrence of two duties of worldly allegiance – to locate Olivier and to clear Yves’s good name – Cadfael must realize that those worldly duties irreconcilably collide with that owed to his monastic community. For he is bound to his abbot not to stay away from Shrewsbury for longer than is necessary to attend the truce conference, after the end of which he is to return to the abbey instantly, or break his vows; and unable to complete either of said two worldly duties in time to comply with that owed to his abbot, break his vows he feels he must. Yet, it is with a heavy heart that Cadfael does so, and casts himself out of the Benedictine community which has been his home and family for over twenty years, to follow a calling stronger than even that of the Holy Church; thus opening the conflicts of his heart to you, reader, more than he has ever done before.

“Brother Cadfael sprang to life suddenly and unexpectedly when he was already approaching sixty, mature, experienced, fully armed and seventeen years tonsured,” his chronicler Ellis Peters (Edith Pargeter) wrote in a 1988 introduction to the 1979 short story collection “A Rare Benedictine,” set in 1120 and compiled after the success of the first Chronicle to shed light on Cadfael’s entry into monastic life. Would that she had had more time on this earth to bring us further accounts of his adventures! Sadly, this was not to be the case. But as things stand, she could not have left us with a better conclusion to his exploits. Rest in peace therefore, Mistress, and may you have many pleasant conversations with Brother Cadfael, wherever you have encountered him since!